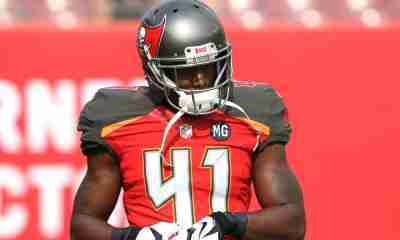 Curtis Wilson Sr., appearing on WBTV, said the fireworks did not pop out of the canister when they exploded.

The Buccaneers had confirmed that Wilson injured one of his hands in the July 4 accident. And his agent also told ESPN the incident involved fireworks.

In a statement Wednesday, the team said its “primary concern at this moment is for his long-term health.”

Wilson was injured near his hometown of Lincolnton, North Carolina. He played at North Carolina State and has appeared in four NFL games over two seasons, two coming last year with the Bucs.

Maj. Lee Caskey of the Lincoln County sheriff’s office said there was no call for an ambulance or emergency medical care that night, though a fire department and the sheriff’s office were eventually called to a hospital where Wilson had been taken for treatment.

Boger City Fire Department Chief Mitch Burgin said firefighters responded to a report of a fire in a car parked at the hospital that night, though it was out by the time they arrived.

In an email to The Associated Press, Burgin said hospital staff put out a fire in the vehicle’s trunk with extinguishers. Firefighters later arrived, removed “a smoldering pair of pants” from the trunk and “used water to completely extinguish” the pants.

Lincoln sheriff’s Lt. William Brooks said he and others from his department also responded to the scene and saw blood inside the vehicle.

“There’s not any kind of criminal investigation or anything going on into it,” Brooks said. “It all appears to be just a bad accident.”

Next post Wie ready for title defense at US Women's Open