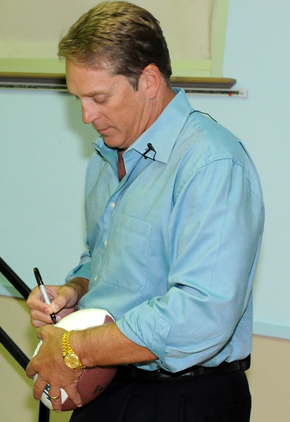 Owner Mark Davis made the announcement Friday evening by saying the initial deal had been “torn up” after Del Rio led the Raiders (12-5) to their first playoff berth in 14 years before a loss to Houston after quarterback Derek Carr broke his right leg in the second-to-last game of the regular season.

“We are excited to continue building on the strong foundation that has been established and this is a significant step in achieving that goal,” Davis said.

Before Del Rio arrived in 2015, the Raiders had posted the worst record in the NFL the previous 13 years as they had a revolving door of coaches and quarterbacks. Oakland had eight coaches in that span before Del Rio solidified the job when hired by general manager Reggie McKenzie.

Del Rio led the Raiders to a 7-9 record his first season before taking a big step forward this past year with 12 wins and the playoff berth. Del Rio set the tone for the season when he went for a 2-point conversion instead of opting for a game-tying extra point late in the opener at New Orleans. The Raiders converted and won the game 35-34.

Del Rio had previously been head coach in Jacksonville where he had a 68-71 record in nine seasons. Del Rio’s has a career mark of 87-84 and his 171 career games are the second most in NFL history for a coach who has never finished in first place. Only Norm Van Brocklin with 173 games has more.

Next post Construction of $8.7 million aviation facility soon to start