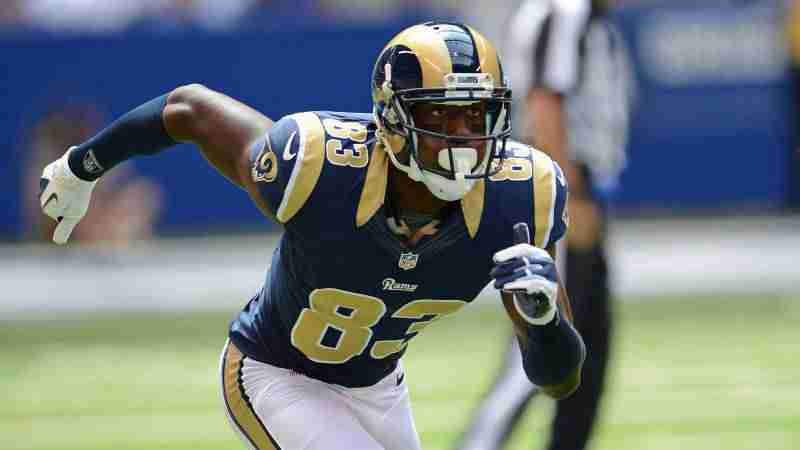 ST. LOUIS (AP) _ Just when he was starting to fully appreciate football, St. Louis Rams wide receiver Brian Quick almost had it taken away from him.

Quick was sidelined after seven games last season with a broken collarbone. The injury was so severe that Quick’s future was in doubt.

“It is remarkable what he’s overcome,” head coach Jeff Fischer said. “The damage he sustained to his shoulder was significant and there was some talk early on that it might’ve been career ending, and that he might not have been able to come back. He just kept fighting through each stage of the rehab, one week after the next, and he kept getting better.”

Quick doesn’t like to talk about the severity of the injury.

“It’s just something I had to go through,” Quick said. “I had checkups in Pensacola (Florida) to see Dr. (James) Andrews. He was like `I’m a miracle.’ I want to really thank him and the trainers.”

Quick was on his way to a breakout season that was derailed when he landed awkwardly on his shoulder at Arrowhead Stadium in a game against the Chiefs.

Quick, who was a second round draft pick by St. Louis in 2012, had shown glimpses of what his speed and 6-foot-3 frame could do on the field during his first two seasons as he struggled in limited playing time while trying to make the adjustment from Appalachian State.

But it seemed to all come together in year three, as Quick had a personal season-high 25 catches for 375 yards and three touchdowns before the injury.

“It started to come together and I began to appreciate the game of football and growing up,” Quick said. “And Kenny (Britt) came along and he helped out tremendously, just teaching me things and just ways to use my body and ways that I can get better on the field.

Rehab consisted of working every day from 9 a.m. to 4 p.m. At times, it was excruciating.

“That didn’t matter, I wanted to get back out here,” Quick said. “I wanted to show them.”

A healthy Quick could become a potent deep-threat with Britt for new quarterback Nick Foles. Last season, 25 percent of the 73 balls Quick and Britt caught went for 20-plus yards.

Quick worked out on his own during OTA’s, but is back in team drills to start training camp. The Rams are bringing him on slowly, putting a yellow no contact cap on Quick’s helmet.

“We’re keeping him off the ground, but he’s running,” Fischer said. “He’s still got a little bit of motion and flexibility to work on and some strength. But by all means, we expect him to be back.”

Quick understands the team’s caution, but can’t wait until he can fully contribute. He believes the injury has helped him fully appreciate his opportunity and could make him better.

“It made me realize, time is very limited out here and anything can happen at any moment,” Quick said. “Everybody says it but for me to experience, it’s different.”