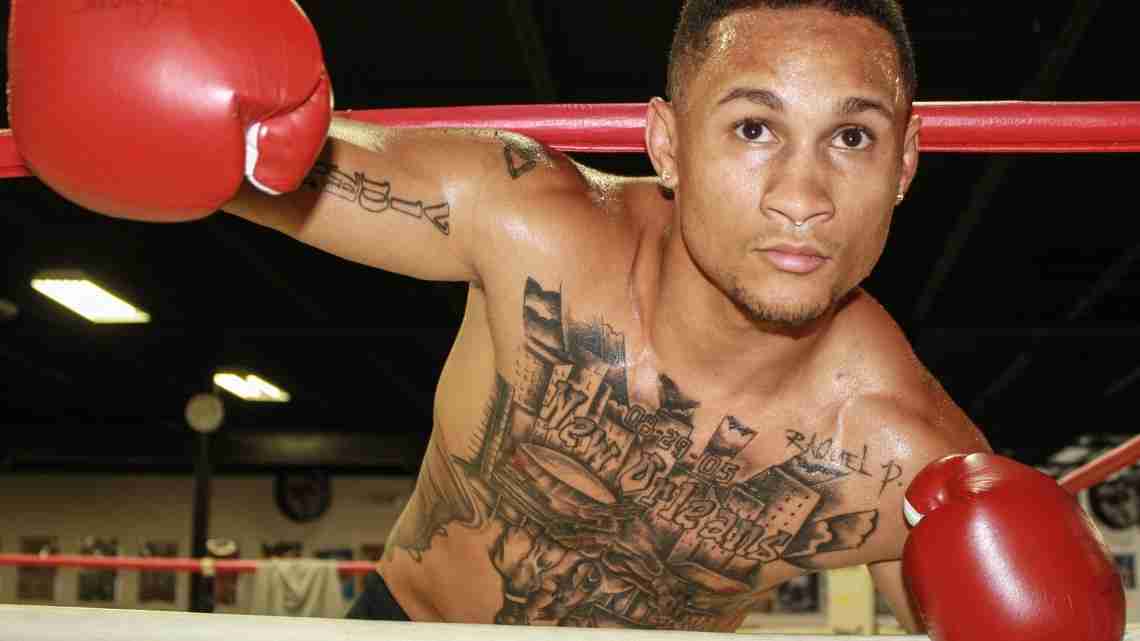 No. 2 ranked junior welterweight Regis Prograis has been called one of boxing’s brightest prospects. Photo by Kevin Hicks for South Florida Times.

FORT LAUDERDALE, Fla. – Regis “Rougarou” Prograis was only 16-years-old when he traded in his football helmet for boxing gloves, but it was one of the wisest decisions he could have ever made.

Now the 28-year-old New Orleans native is going after a world championship with a vengeance – and it’s highly likely that he’ll get one.

Ranked No. 2 in the world in the junior welterweight division, Prograis holds an impressive record of 20-0 with 17 knockouts. Yahoo Sports calls him a “must-see fighter” who is “one of boxing’s brightest prospects.”

Former world heavyweight champion Shannon Briggs thinks Prograis has what it takes to be one of the greats.

“I’m very impressed with Regis. I think he’s a superstar in the making. He’s intelligent in and out of the ring, especially for a young fighter. I think he has a bright future in front of him,” Briggs said.

Recently training at The Heavyweight Factory in Ft. Lauderdale, Prograis took a break from his rigorous workout to give the South Florida Times an exclusive interview. 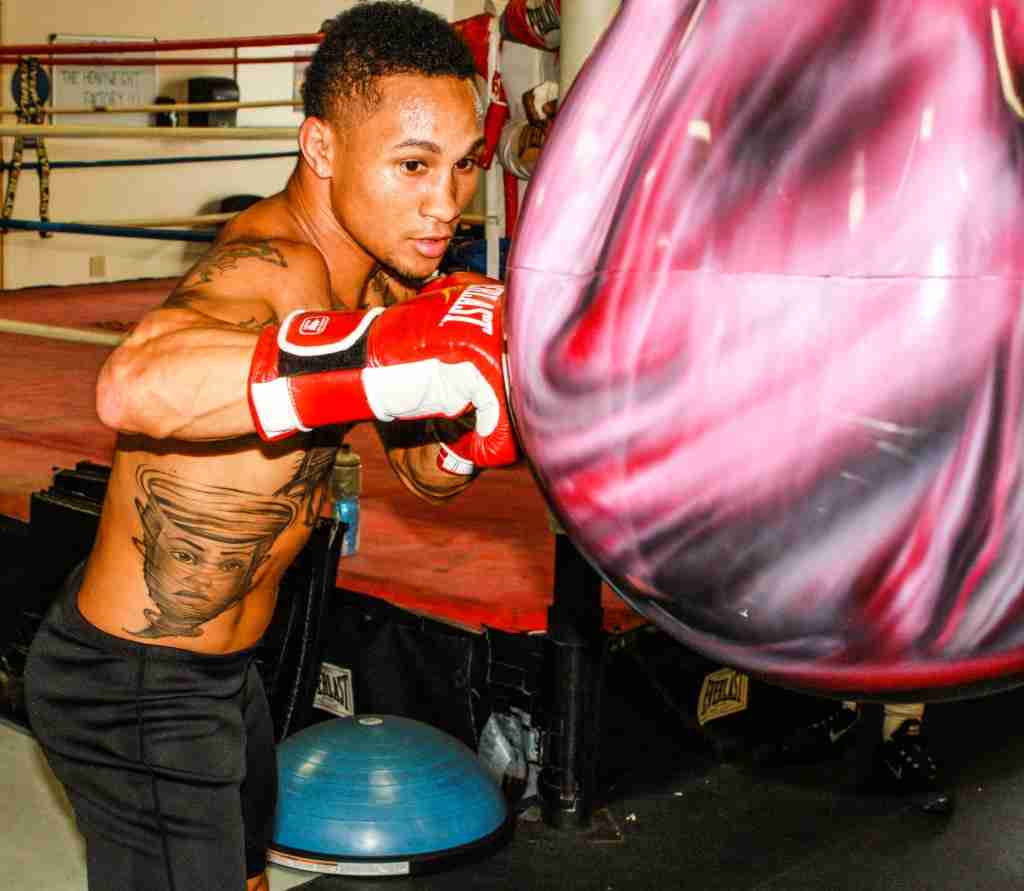 And, like many people from New Orleans, he has risen above adversity to embrace that birthright.

Displaced by Hurricane Katrina, Prograis moved around quite a bit before settling in Houston where he began training at the Savannah Boxing Club next to some of boxing’s most iconic names.

“Mr. and Mrs. Savannah, they’re wonderful people. I love them to death,” Prograis said. “I was around Holyfield, Juan Diaz … Raul Marquez, I can go into so many names; but I was training alongside these people. I’m 17-years-old and I’m training next to Holyfield. It does something to your mind, (you think) I’m gon’ do this too.”

So he became the first in his family to pursue a professional boxing career, crediting his genes and natural athleticism with helping him remain undefeated thus far.

“My daddy is real athletic and my mama is just a real strong woman so I felt like coming up, I had the perfect genetics because I’m athletic like my daddy, but I’m strong like my mama. I feel like I have the perfect build to be a fighter,” Prograis said.

Despite his perfect record, Prograis explained he can’t force others to fight him – at least not yet.

“In professional boxing, it’s a lot of politics. They (ranking boxers) don’t have to fight you if they don’t want to unless it’s mandatory. That’s what we’re working on now. We’re trying to be a mandatory challenger,” Prograis said.

New Orleans is rooting for its hometown fighter to have the opportunity to shine on an even bigger stage.

“I got so much love, it’s crazy. I was here in Miami with Lil’ Wayne and Mack Maine. They my people now. They repping me hard. The thing about New Orleans people, we ride or die fans,” Prograis said. “The New Orleans spirit is unlike no other city. It’s crazy, shows so much energy. … I got a lot of love from the people that know me.”

In return, Prograis plans to make his family, his hometown and Houston, where he still resides with his wife Raquel and two young children, proud.

“Houston adopted me. After Hurricane Katrina, I came to Houston and Houston showed a lot of love to me so Houston’s definitely on my back, but New Orleans is on my front. You see New Orleans on my chest,” Prograis said, referring to his literal tattoo of the New Orleans skyline. “That’s how I feel like it’s gon’ go. They both gon’ show me love. I want to represent everybody.” 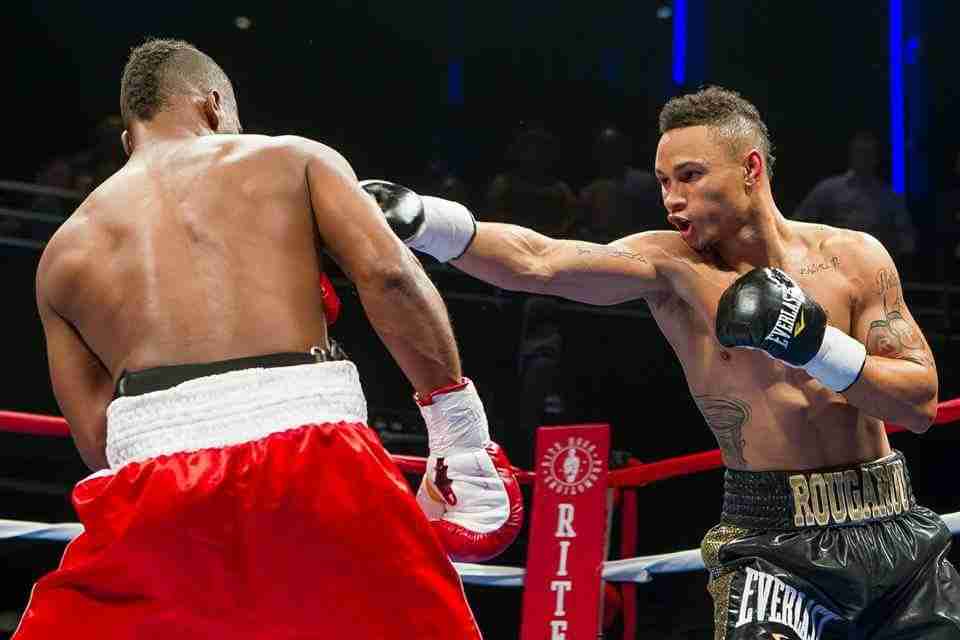 Regis Prograis faces off against an opponent. Photo Courtesy of EFEMJEE Creative Group.

Unlike many other professional boxers, Prograis isn’t too big on trash talking because he believes his skills can speak for themselves.

“In boxing, as a fighter you got to know everybody is serious because all it can take is one punch to end it,” Prograis said. “If I say something, I’m gon’ mean it. I’m not gon’ do it to sell fights. I don’t really have that personality. I don’t need to talk. My fists gon’ do the talking, especially right now. If they want to talk, then I’ll talk back. I’m not gon’ start nothing, but I’m definitely gon’ finish it.”

A self-described, “big-time student of the game,” Prograis said there are and have been so many great fighters; but he specifically names late greats like Muhammad Ali, Sugar Ray Robinson and Harry Armstrong, as well as living legends Mike Tyson and Roberto Duran among his influences.

“Mike Tyson is one of the reasons that I got into boxing and Roberto Duran. That’s my two living idols right now,” Prograis said. “One night, I probably was 12 or 13-years-old and I was watching ESPN Classic and it was this man on TV. It was his greatest hits and he was just knocking everybody out. He was destroying everybody and that man was Mike Tyson. I was like, ‘Man I want to be like that.’ … Roberto Duran is Mike Tyson’s favorite fighter so I started watching him. He’s my size and he was (like) Mike Tyson before Mike Tyson, but he was meaner. That’s why I like him.”

In order to prepare for greatness, Prograis trains rigorously, eats healthy and saturates himself with industry knowledge. In fact, you likely won’t catch him watching TV if he isn’t watching boxing.

“I study a lot. I read and study great fighters. I train hard. When I’m in training camp, I literally train all day. I go home, watch a little boxing, read, play with my kids for a little while until I have to get back up and run,” Prograis said. “The only off day I get is Sunday so I try to do something fun with my family. It’s non-stop training, but I love it. I love being around my gym. I love being around all those dudes. I feel at home.”

For Prograis, none of it will be in vain when he becomes a world champion – and he’s down to face whomever necessary to reach his goal because he feels his mindset removes all limitations.

“Right now I’m chasing a belt. It doesn’t matter for me who I fight. I’m ranked No. 2 in the world so hopefully the next fight will be either for a belt or for a mandatory title eliminator,” Prograis said. “Once I fight for the belt, then I’ll call myself the world champion. That’s the actual goal … I really feel like I don’t have no limits. If you tell me what I can’t do, I guarantee I’ll prove you wrong – but I wouldn’t have this mindset if I wasn’t boxing.”

Next post 'Girls Trip' is a movie journey you should take