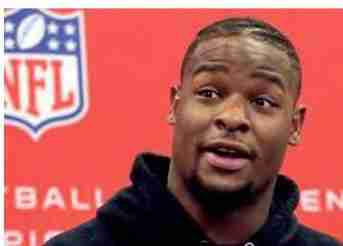 HOUSTON – Bernard Edwards spent the leading and training past 16 years as an Air Force surgical operations manager, more than 300 medics and caregivers and aiding surgeons serving in the military. The retired technical sergeant is on Radio Row during Super Bowl week getting a chance to host a one-hour talk show on

“I am launching a career in public speaking, which encompasses all different forms of media,” Edwards said as he prepared for his Wednesday program on Super Bowl LI Radio, SiriusXM 134. 1:09 PM Page 1

“In broadcasting there are so many lanes and various forms of social media, TV and radio and podcasts. I am primarily interested in sports when it comes to broadcasting. For public speaking, I like to do keynotes on leadership, diversity, personal development, business.

“I’ve never been on radio on this level, though I have been on (local) public radio. I also did a channel for veterans and those on active duty and did some various interviews on AFN (Armed Force Network).” Edwards, 36, grew up in Europe in a military family and lettered in football, basketball, and track at Bitburg American High School.

“I was blessed to make the All-Europe teams and even played basketball for a local German team for one season instead of my high school, so that I could experience wrestling for my high school. You couldn’t play two sports for the school in one season,” he explains.

“While serving in the Air Force, I played defensive back for the Armed Services

He also took up mixed martial arts and trained in Brazilian jiu-jitsu and muay thai, competing in the Army Combatives tournaments. Edwards has traveled to Thailand and Bali to train in MMA.

Edwards has strong interest in broadcasting now that he is out of the armed services.

So for an hour Wednesday, FedEx, the USO and SiriusXM are giving him the opportunity to talk sports – to America.

He’ll get off to a good start with such guests as Drew Brees, Le’Veon Bell and David Johnson for his debut.