Richt’s message to Miami: All goals are still within reach 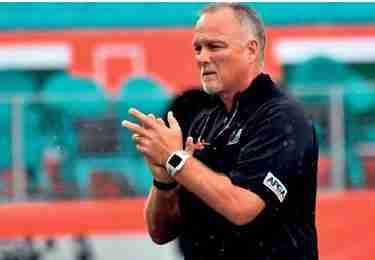 PHOTO COURTESY OF SATURDAY DOWN SOUTH

CORAL GABLES, Fla. (AP) – Mark Richt’s tenure as coach at Miami has been a constant run of streaks: Win his first four games, then lose his next fours, then win 15 consecutive times, and now lose another four in a row.

He’s ready for the pendulum to start swinging the other way again.

And it should begin moving in that direction Saturday, when the Hurricanes host Savannah State. Beating an overmatched opponent this coming weekend won’t dull the sting from a season-opening 33-17 loss to LSU – but in a very disappointed locker room after that game, Richt tried to convince his team that every trophy they want to touch this season is still within reach.

“If you’re going to lose a game, it might as well be the first one,” Richt said. “People tend to kind of forget about it if you play well as the season goes along. That’s what I told the team.”

His point makes sense. The LSU loss doesn’t hurt Miami in the Atlantic Coast Conference race, which is the springboard to every other goal on their checklist for 2018. But even so, after the opener was mostly a debacle, this will not be a pleasant next few days for Miami (0-1).

The Hurricanes are sure to drop from the No. 8 spot in the AP Top 25 poll and will probably freefall on the ballots of many voters who saw how lopsided things looked when LSU led 33-3 after three quarters. There will be adjustments to the depth chart, and quarterback Malik Rosier – who was 15 for 35 against LSU – might even hear some boos from fans at Miami’s home opener against Savannah State.

Rosier had moments where he looked fantastic, leading two touchdown drives that got Miami within some sort of striking distance in the final 15 minutes. He also had more than a few moments where he misfired, sometimes badly. LSU picked Rosier off twice, had plenty of other interception opportunities, and had no trouble putting him under pressure.

“He certainly made a few great throws and made some great plays,” Richt said. “We just dug the hole so deep, it was very difficult to dig out. But we did make it interesting there for a minute. That’s about the best I can say for that.”

Rosier started 6 for 10 passing. He then completed four of his next 15 throws, with two interceptions in that stretch, as the game turned into an LSU runaway.

“We have a long season,” Rosier said. “I feel like if we go out and we win every game … we still have a chance.” In other words, this is where a hot streak would come in handy.

Miami should still be favored, probably considerably, in each of its next four games. Savannah State is a FCS school that’s dropping to Division II next year and is coming off a 52-0 loss to UAB. The Hurricanes then go to Toledo, play host to FIU and open defense of their ACC Coastal Division championship against North Carolina.
Win all those, and LSU becomes a distant memory.

Slip up again, and who knows what happens from there.

“We’re not out of it,” Rosier said. “We’ve got to put this game behind us.” There’s a lot for Miami to clean up in the interim.

Miami committed 11 penalties against LSU and was 7 for 19 on third- and fourthdown conversion chances – areas where the Hurricanes struggled last season as well.

Rosier’s accuracy, something he spent the offseason working to improve, was far from sharp. Other than wide receiver Jeff Thomas, who had five catches for 132 yards, no one had big numbers offensively. And the defense failed to get a takeaway, meaning the “turnover chain” never left its case.

Next post KAVANAUGH'S CIVIL RIGHTS VIEWS STUDIED AHEAD OF CONFIRMATION