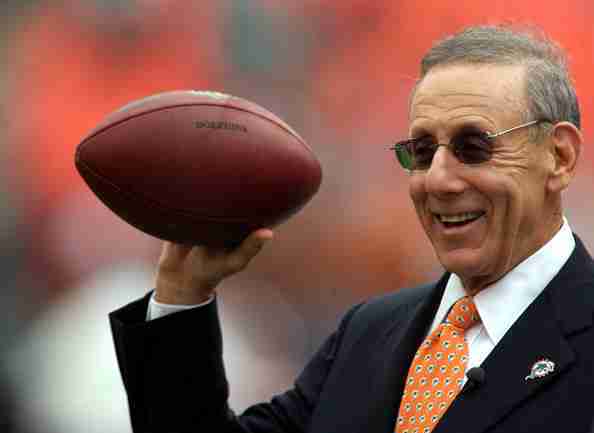 DAVIE, Fla. (AP) _ About a half-hour into the Miami Dolphins’ first practice of the season, owner Stephen Ross had his team, coaches and staff gather around him at midfield.

He spoke for only a couple of minutes.

“No excuses,” Dolphins quarterback Ryan Tannehill said. “We’re finding a way to get it done.”

With that, the 50th training camp in Dolphins history is off and running _ and a franchise that hasn’t won a playoff game in 14 years is setting out, once again, to change course.

The optimism is obvious, and there’s nothing cautious about it these days with the Dolphins. A normally reserved head coach in Joe Philbin is talking about championship possibilities and Ross was adamant when saying that he thinks the Dolphins are ready to compete in big ways after an offseason revamping led by the acquisition of defensive lineman Ndamukong Suh.

Never mind that the reigning Super Bowl champion New England Patriots are still in the AFC East, never mind that the Dolphins didn’t reach the playoffs in any of the last six seasons and that 24 different players have thrown at least one pass for Miami since the team’s last postseason victory. On Day 1 of any training camp, everyone thinks big.

Practice was predictably peppy from the outset. It might not have been coincidental that Fabolous’ “My Time” blared inside the team’s practice bubble when Tannehill took the first 11-on-11 snap of camp, albeit with nobody hitting and nobody in pads. Philbin spoke a few minutes later, then Ross took his place in front of the team, the head coach nodding slightly to the owner’s left, the team’s personnel brain trust of Mike Tannenbaum and Dennis Hickey listening off to the right.

“Our roster, since I’ve been here, has never been as good,” Ross said in an interview session after practice. “And we’ve attracted players because everybody can talk the talk, but these guys have a lot of options and we got the best, I think.”

When Ross got done speaking to the team, veteran defensive standout Cameron Wake was the first to sprint toward the door for the start of outside drills and most of the Dolphins quickly followed. Ross, Philbin and Tannenbaum left together after the players, then chatted from the corner of an end zone for a few moments when practice resumed.

“He wants us to win,” center Mike Pouncey said of Ross’ expectations. “That’s his only expectation, to win football games. That’s what he bought this team for.”

Ross stopped short of saying Philbin is facing a playoffs-or-else year in his fourth season at the Dolphins’ helm, but let it be known that expectations are higher now.

Notes: LT Branden Albert, who needed knee surgery last November to repair ligament tears, suggested that he’s on track to be ready for Week 1. “I’ve told everybody it’s going to be sooner than later,” Albert said. … First-round draft pick DeVante Parker and safety Don Jones started camp on the physically unable to perform list. … Ross remains hopeful that the $400 million or so in upgrades to Sun Life Stadium leads to another Super Bowl in South Florida soon. “When you see what we’ve done, I don’t think there’s a stadium in the country that can really compete with us. It’s going to be state of the art. And it’s Florida, man. … I would think they’re ready for a little warm weather. You would hope. You would think.”