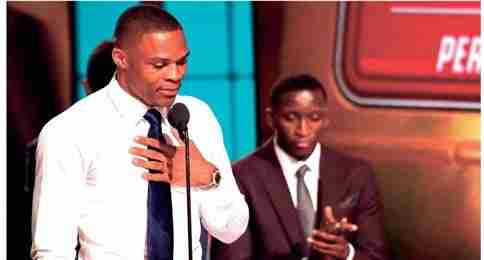 Russell Westbrook at the microphone

NEW YORK (AP) – Russell Westbrook moved past Oscar Robertson and kept right on going to the top of the NBA.

Westbrook was voted MVP on Monday night after setting a record with 42 tripledoubles during his historic season. He led the league with 31.6 points, 10.7 rebounds and 10.4 assists per game, joining Robertson as the only players to average a tripledouble for the season and breaking Robertson’s single-season record of 41 triple-doubles in 1961-62.

“I remember growing up just being home, playing the video games and stuff with my pops, and my mom sitting there and my brother and just talking about maybe one day I could be the MVP. Obviously I was joking at the time,” Westbrook said.

“But now to be standing here with this trophy next to me is a true blessing, man, and it’s an unbelievable feeling, something that I can never imagine.”

Westbrook succeeded Stephen Curry, who had won the past two MVP awards. The point guard who plays with defiance on the court got choked up during an acceptance speech in which he brought some teammates onto the stage with him.

The Thunder went 33-9 when he had a triple-double, riding Westbrook’s record run into the playoffs in their first season after losing Kevin Durant to the Golden State Warriors.

“Oscar, guys like him, Magic Johnson, those guys, obviously I wasn’t able to see those guys play, but just to look back at history and see the things that they did, it’s something that I looked up to as a kid,” Westbrook said.

“I never thought I would be able to say that I broke Oscar Robertson’s record, and that’s just a true blessing.”

Earlier, Milwaukee’s Malcolm Brogdon became the first player not picked in the first round to win NBA Rookie of the Year in the common draft era, beating out Philadelphia’s Dario Saric and Joel Embiid.

Brogdon was the No. 36 overall selection out of Virginia. The common draft era began in 1966.

Houston coach Mike D’Antoni won his second Coach of the Year award, and the Rockets’ Eric Gordon was Sixth Man of the Year after setting a record for most 3-pointers off the bench in his first season as a reserve.

“Obviously I’m just proud of the team and the way they responded all year. Great organization,” D’Antoni said of the Rockets’ 55win season.

“This is not an individual award. This is a lot of people, a lot of hard work goes into it, and I’m the recipient of some pretty good players.”

In his first season coming off the bench, Gordon set a single-season record with 206 3-pointers by a reserve. He averaged 16.2 points to help fuel the Rockets’ run to the surprising No. 3 seed in the Western Conference and edged former NBA Finals MVP Andre Iguodala of Golden State by 32 points.

Golden State’s Draymond Green won the Defensive Player of the Year, ending Leonard’s two-year run. Leading the league in steals from his do-everything role with the NBA champions. He had a franchiserecord 10 steals in a Feb. 10 game at Memphis while recording the first triple-double in NBA history without scoring in double figures, adding 11 rebounds and 10 assists.

The NBA formerly gave out its individual awards at various points throughout the postseason before switching to the awards show this season and presenting them all at once in front of the league’s top players and stars from the entertainment world.

Two of the best moments came during segments that didn’t include the NBA’s six individual awards.

The 11-time champion as a player and the league’s first black coach first pointed at them and joked that he would have kicked their butts, then told them: “You have no idea how much respect I have for you guys.”

Former Thunder assistant coach Monty Williams was given the SagerStrong Award for the strength he showed after his wife was killed in a car crash in Oklahoma City. He was given a colorful jacket like the ones worn by Craig Sager, the longtime Turner Sports reporter who died of cancer this past season.

Previous post Serena Williams: No interest in McEnroe’s self promotion