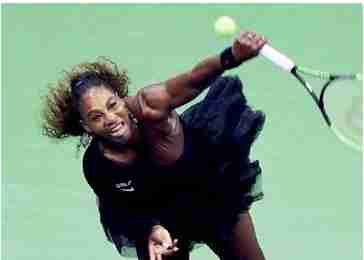 NEW YORK (AP) — Serena Williams was disappointed she didn’t get to say goodbye to her daughter before heading to Flushing Meadows to play in the U.S. Open for the first time in two years Monday night.

So after needing just 70 minutes to put together a 6-4, 6-0 victory over 68thranked Magda Linette of Poland under the lights at Arthur Ashe Stadium, Williams was excited to go make amends.

Williams told the crowd in her on-court interview afterward that it “kind of broke my spirit” to not have a proper farewell with Olympia, who turns 1 on Saturday.

“But I got through it,” Williams said, “and I get to go back and see her.”

The six-time champion at the U.S. Open missed it last year because she gave birth during the tournament.

The American, who turns 37 in September, did not seem to miss a beat. She hit six aces, won all eight of her service games and compiled a 23-9 edge in winners.

“It’s such a good feeling to be back out here,” said Williams, who improved to 180 in first-round matches at Flushing Meadows and 68-1 in openers at all Slams. “The first set was tight. It was my first back here in New York, so that wasn’t the easiest. Once I got settled, I started doing what I’m trying to do Williams came into this week in what amounts to a real slump for her, with losses in three of her past four matches. Then again, one of those setbacks came in the Wimbledon final against Angelique Kerber.

Still, she is not accustomed to those sorts of stretches.

This is only her seventh tournament this season as she bids for her 24th Grand Slam title.

“I think I’m getting there,” Williams said. “I’ve been feeling really good in practice and I’m training so hard.”

Looked that way as she finished off Linette with a 114 mph ace, then smiled ever so slightly while shaking a clenched fist as she walked up to the net.

She is seeded 17th and moved into a second-round meeting against 101st-ranked Carina Witthoeft of Germany. Win that, and Williams could face a very familiar foe in the third round: her older sister, Venus, a two-time U.S. Open champion who is seeded No. 16 and edged 2004 champ Svetlana Kuznetsova 6-3, 5-7, 6-3 Monday.

It would be the earliest matchup for the Williams siblings at a Grand Slam tournament in two decades: Their very first all-inthe-family showdown came in the second round of the 1998 Australian Open.

“Hopefully,” Venus said, “we’ll both be there.”

Previous post Use FL511 to prepare for the 2018 hurricane season