Sexual consent, debated across US, key to Derrick Rose case 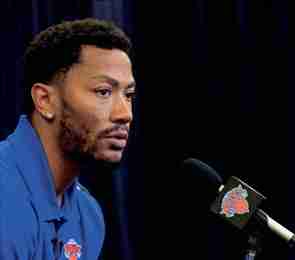 LOS ANGELES (AP) — Months before Derrick Rose took the stand to defend himself in a lawsuit claiming he and two friends raped an ex-girlfriend while she was intoxicated, the NBA star was asked if he understood the word “consent.”

“No. But can you tell me?” he asked at a deposition in June.

Rose came to court last week with a much better grasp of the word that is central to the $21 million civil case, though his interpretation of the concept could prove costly.

No one disputes the New York Knicks player and his friends had sex with the woman in her apartment Aug. 27, 2013. The question is whether she gave her consent – as the men claim – or whether she was too incapacitated to do so – as she insists.

There is no commonly accepted definition for consent, which is at the heart of a “patchwork quilt” of evolving laws on rape and sexual assault that in some cases require an affirmative agreement before sex, attorney Rebecca O’Connor said.

“It is murky, and I think that’s where we’re seeing a lot states try to clear the weeds, if you will, and take this on and make it clear,” said O’Connor, a vice president at the Rape, Abuse & Incest National Network. “It’s so complicated we can never just say it’s black and white.”

Rape was once defined as intercourse with force against a woman’s will, said Matt Lyon, a law professor at Lincoln Memorial University. Reform efforts in some states led to rape being defined more by the non- consent of the victim than a use of force by the perpetrator.

States such as California have gone further in deciding that consent can be withdrawn during sex and that a victim can be too incapacitated to agree to the act.

“One of the big criticisms against the modernization is the ‘he said, she said,'” Lyon said. “It’s so easy when it’s clear there was force used, but here the woman may say it was rape though there’s no physical evidence of force or that it was done against her will.”

That is the situation in the Rose case, where the woman said she blacked out and felt drugged after a night of drinking and hanging out at Rose’s Beverly Hills mansion. With no physical evidence, the case – which proceeded to closing arguments Tuesday – hinges as much on her credibility as that of the three men.

The woman said she went home from Rose’s place, vomited and woke up around 3 a.m. to find Rose, Ryan Allen and Randall Hampton having sex with her against her will.

“Maybe she sent suggestive texts or emails, but that doesn’t prove she consented to it at the time,” said Evan Lee, a law professor at the University of California, Hastings College of Law. “A woman may be willing to have sex 23 hours in the day, but if he has sex in that 24th hour when she’s not willing, then that’s rape if he knows she doesn’t want to.”

Rose testified that he assumed consent based on their sexual history, the fact that she had never denied him and because of sex acts she initiated with him and his friends at the Beverly Hills house earlier in the night. He and his friends all said the woman seemed sober and she willingly participated.

The Associated Press is not naming her because it generally does not identify people who say they are victims of sexual assault.

The topic of consent and whether someone is too incapacitated to agree to sex have been part of a national discussion after allegations that Bill Cosby drugged and molested dozens of women over decades and after outrage over a six- month jail sentence for former Stanford swimmer Brock Turner, who sexually assaulted an unconscious woman.

The topic has even crossed into the presidential campaign with the emergence of a 2005 recording of Republican candidate Donald Trump bragging about grabbing women’s genitalia and several women accusing him of groping them.