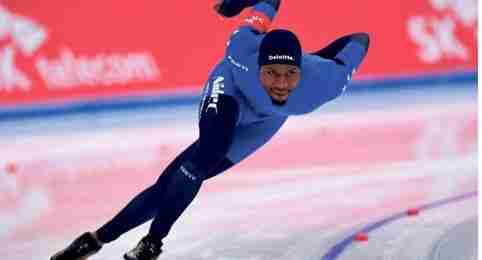 GANGNEUNG, South Korea (AP) — Shani Davis labored across the line, gulping for air, a shell of what he once was in a clap-skate.

The years can be cruel that way. “It’s hard to stay on the top forever,” said Belgium’s Bart Swings, who went in the same pair with Davis and beat him to the finish by more than a full second over 1,500 meters — a rout in speedskating terms. “Shani had an incredibly high level.

I think with his highest level, he could still win here. But, of course, he’s getting on in age now.”

Indeed, he is. At 35, Davis is very likely skating in his final Olympics. On Tuesday night, he finished 19th in his debut at Pyeongchang Games, hardly looking like the guy who will surely go down as one of America’s greatest Winter Olympians.

“The ice is super-fast,” he said. “Unfortunately, I wasn’t.”

No matter what happens in South Korea, Davis’ legacy on the ice is secure.

The first African-American to win an individual gold medal at the Winter Olympics. The only skater to claim back-to-back titles in the 1,000 meters. World records, world championships, World Cup titles — he’s pretty much done it all. And it wasn’t just the honors he claimed, the records he broke. It was the way he did it.

That lean, 6-foot-2 frame brought a touch of silken elegance to a grueling, grunting sport, his hunched-over technique so smooth through the treacherous turns that he was always going a lot faster than it seemed.

Away from the ice, things get a bit more complicated.

The ride has never been as smooth as the stride.

At this, his fifth Winter Games, Davis stirred up a hornet’s nest before the competition even began. After losing out on a coin flip to carry the U.S. flag in the opening ceremony — a career-capping honor he was fully deserving of and, by all accounts, really, really wanted — a tweet appeared on his official account blasting the tie-breaking protocol and implying that race might’ve been an issue.

It wasn’t clear if Davis actually wrote the tweet. Maybe it was crafted by one of his handlers, or perhaps his outspoken mother, Cherie. But it was his account, verified and all, and Davis made no attempt to clear things up. Instead, he went into lockdown mode — blowing off the media when he walked through the mixed zone after practices and blocking a bunch of journalists (this one included) from seeing his future posts on Twitter.

Davis finally stopped after the 1,500. He was in no mood to talk about the flag.

“Before we started this interview, (we said) we’re sticking only to skating questions,” Davis said. “I would like to continue to focus on skating-only questions.” It was a familiar exchange.

Davis often had a standoffish relationship with the American media, which he clearly saw (and not without justification) as a bunch of speedskating-ignorant folks who showed up every four years to pester him about his amazing journey but were nowhere to be found the rest of the time.

He always seemed more comfortable around the Dutch, who share a year-after-year passion for the sport that just can’t be found in America (and is on display again in Pyeongchang, where they’ve won the first four events after a dominating performance at Sochi four years ago ).

Davis never appeared the least bit eager to cash in his groundbreaking achievements for fame and glory, or what passes for fame and glory by speedskating’s more modest standards. He preferred the road less traveled, training on his own and doing things his way, estranged from the U.S. national team.

One can’t help but wonder if Davis’ single-minded approach — as admirable as it may be — squandered a golden chance to expand speedskating’s limited appeal in the U.S. Then again, there are two other African-American speedskaters on this year’s team, an unprecedented surge in diversity that was no doubt influenced by Davis’ determination to leave his mark on a mostly white sport.

“He is certainly the elder statesman that we know has kind of been through everything,” said Matt Kooreman, the U.S. coach. Despite Davis’ lone-wolf approach, he’s been described as a trusted friend and valued mentor by his fellow skaters. Yes, he feuded with another American star, Chad Hedrick, at the 2006 Turin Olympics, infamously storming out of the interview room after they had claimed silver and bronze in the 1,500 meters. But there were no signs of discord when they skated together in Vancouver four years later. Hedrick, now retired, was among those who tweeted his support to Davis after the flag flap.

“Whether you are the flagbearer or not,” Hedrick wrote, “you will go down as one of the best Winter Olympians in US history.”

Davis has one more race to go in Pyeongchang.