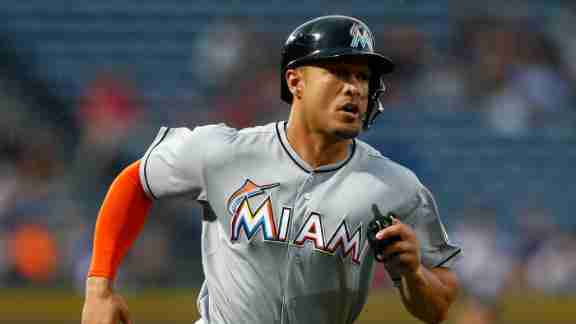 MIAMI (AP) _ A stitched two-inch incision zigzags along Giancarlo Stanton’s left hand, on the base of the palm above the wrist.

He wears a splint and says the injury still hurts, and he doesn’t yet have a full range of motion. But the swelling has gone down, the stitches will soon be removed, and he’s on schedule to rejoin the Miami Marlins in another two to four weeks.

Stanton broke his hand swinging two weeks ago, an injury that will force him to miss the All-Star Game despite being chosen a National League starter.

“It’s great that I got voted in,” he said Thursday, talking publicly for the first time since he was hurt. “But not to be able to participate stinks.”

Stanton said he hasn’t decided whether to attend the game in Cincinnati. He wants to be there, but said his rehabilitation takes priority.

Despite being sidelined, Stanton continued to lead the majors in homers through Wednesday with 27, and ranked among the leaders with 67 RBIs. The injury might doom his chances of winning either title, but he’s confident it will have no lingering effect on his productivity.

“When I’m ready to go out there and I’m on the field, I’m not worried about what I’m going to do. It’s just a matter of getting there.”

Stanton’s injury was a costly blow to the Marlins, who were already struggling despite high hopes this season. They went into Thursday’s game against Cincinnati at 35-50, and were 5-5 without him.

With Stanton out, Miami’s lone representative playing in the All-Star Game will be Dee Gordon, who recently hit his first homer of the year _ the first inside-the-park homer ever at Marlins Park. Stanton’s reaction to it?

“It was a crock,” he said with a grin. “It should have been an error. He should be homerless still.”

None of Stanton’s 181 homers have been of the inside-the-park variety.

Next post Review: Microsoft Office in a world of multiple devices