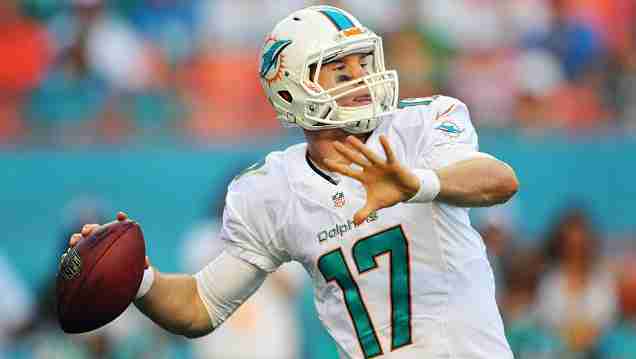 He threw seven touchdown passes, three of them on consecutive plays during goal-line/red-zone work and had another on a long ball to Greg Jennings. Tannehill also connected with Jarvis Landry on a deep completion.

Tannehill’s proficient performance highlighted what turned out to be the team’s final mandatory mini-camp practice before the Dolphins reconvene on July 28 for training camp. The Dolphins initially were scheduled to also practice Thursday, but coach Joe Philbin canceled the third day this week because, “We got a lot accomplished.”

“I feel really good about the two days that we’ve had in this mini-camp and the way that (players) have gone about their business,” Philbin said.

It’s been a busy offseason for the Dolphins, who head into their six-week hiatus before what will be an optimistic start to the 2015 season after a slew of moves that featured the free-agent signing of All-Pro defensive tackle Ndamukong Suh.

After releasing Brian Hartline and Brandon Gibson, they traded Mike Wallace to the Vikings. Miami signed Jennings, a veteran free agent, to replace Wallace. The Dolphins also dealt Dannell Ellerbe to the Saints for Kenny Stills and drafted DeVante Parker in the first round out of Louisville.

Those were not Miami’s only moves.

“This has been a great offseason,” Tannehill said. “The pieces we have added, veteran guys _ Suh, Greg Jennings and some other guys, along with the young guys we have added, we have a plethora of different options to attack people.

“This team is hungry,” Tannehill added. “We are hungry to win a championship. I know those things aren’t done overnight, but the way we have finished the last three years kind of has a lot of guys (with) fire inside. .As far as training-wise, and knowing what we want to accomplish, I feel like the fire is as big as ever.”

All-Pro left tackle Branden Albert, last season’s major free-agent acquisition following the pick-up of Wallace in 2013, limped around on the field this week while doing individual drills. General manager Dennis Hickey said last month he expected Albert, who underwent reconstructive surgery on his right knee in January, to be ready for the 2015 season opener.

“They are giving a bunch of different guys looks,” Tannehill said. “Those are two huge spots for us come the fall and game time, so whoever steps up and winds up winning those jobs is going to be huge. Whoever doesn’t win those jobs, they are getting a lot valuable reps right now so that is all going to pay off.”

Tannehill has looked sharp on both days of mini-camp, as well as last week.

The Dolphins also are enthused about the effect Suh’s presence will have on the pass rushing of defensive ends Cameron Wake and Olivier Vernon, as well as what Suh and Mosley can do to shore up a run defense that surrendered 992 yards on the ground the final six games of 2014.

“There’s a lot of time for us to improve and develop by the time July 28 rolls around,” Philbin said of the team’s upcoming break before training camp. “Everything they do impacts each and every one of us. Just like everything I do.

“So we just remind them there’s time for development. Take a look at themselves, study themselves on tape and try to learn and improve.”