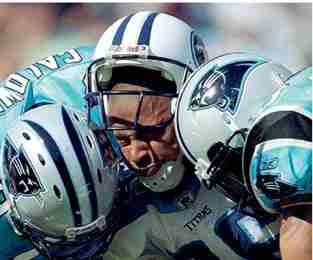 FILE – In this Sept. 13, 2018, file photo, Melissa quarterback Brendon Lewis (1) runs the ball as Whitehouse’s Michael Raabe (11) attempts to tackle him during a high school football game in Emory, Texas.

The University Interscholastic League, Texas’ governing body for public high school sports, on Monday ordered the schools to submit individual concussion reports. Texas has more high school athletes than any other state with about 825,000.

The requirement applies to schools in the most populous Class 6A UIL designation. Staff at those schools must answer more than a dozen questions on each player — such as when the concussion occurred, whether it came from contact with the ground or another player, and so on — that are relayed to researchers with the O’Donnell Brain Institute at the University of Texas Southwestern Medical Center in Dallas.

“This is the first of its kind quality-improvement program in the country, certainly the largest,” UIL Deputy Director Jamey Harrison said Tuesday.

All 50 states by 2014 had passed rules or laws to address concussions in youth athletics, with all including some provision that an athlete suspected of having a concussion be removed from play.

But it’s believed that Texas is one of just a few states, Michigan being another, that requires mandatory reporting. Michigan’s requirement that all head injuries be reported went into effect in 2015, while the mandate in Texas begins next August. Smaller Texas schools can participate on a voluntary basis.

The change in Texas means the collaboration with the O’Donnell Brain Institute becomes the largest study of head trauma to young athletes.

“We’re pleased about mandating at least a subset of schools to report because that will enhance the information that we’re able to obtain,” said Dr. Munro Cullum, a professor of psychiatry, neurology and neurotherapeutics with the institute. A primary goal is to determine the frequency of concussions, Cullum said. The federal Centers for Disease Control and Prevention estimates that upward of 3.8 million athletic- and recreation-related concussions occur each year in the U.S., but Cullum noted that CDC figures are based on emergency room visits and many cases go unreported.

He wants to then gather other information that can be a guidepost for school and public health officials. For instance, if a school gets a new turf field that’s meant to better cushion players when they fall, then is it also minimizing head injuries?

“What changes in rules, safety or equipment in some areas of the state are reducing concussions?” he asked.

Dawn Comstock, a professor of epidemiology with the Colorado School of Public Health, credits the move by the UIL but said it tracks concussions after they occur and doesn’t prevent them in the first place.

The change by the UIL “does absolutely nothing to prevent initial concussions,” Comstock said by email. “That is frequently lost during these discussions.”

Next post US SEEKING TO BOOST LNG EXPORTS TO JAPAN, REST OF ASIA

Previous post The night Cassius hung with Sam, Jim and Malcolm in Miami