Tiger Woods on Players rally: This weekend was more like it 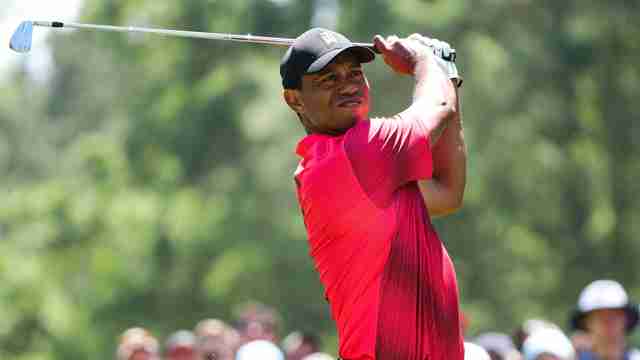 REAL PLAYER: Tiger Woods shot a 65 marking his lowest score ever at the Players Championship match.

PONTE VEDRA BEACH, Fla. (AP) – Standing in the middle of the 14th fairway with a sand wedge in his hands, Tiger Woods had a chance. At making a birdie. At cutting into Webb Simpson’s lead. Maybe even at winning for the first time since returning from a fourth back surgery.

Woods was 110 yards out and four shots back in the final round. He struck the ball cleanly, stared at intently and then watched it spin off the green.

The 14-time major winner fell a few feet short of providing the first real drama Sunday on the Stadium Course at TPC Sawgrass. He missed an 8-foot par putt that caused him to flip his club, ended up with a disappointing bogey and limped home with a double at the famed 17th.
Woods, however, left the course feeling better than ever about his comeback. “This weekend was more like it,” Woods said. Woods shot a 3-under 69 in the final round and tied for 11th at 11-under 277. His round could have been much closer to the 65 he shot Saturday.

“If I would have got off to a better start this week, if I would have had the game I had this weekend the beginning of the week, I would have gave Webb a little bit of a run,” said Woods, who finished seven shots behind Simpson.

Woods felt like he finally pulled together all aspects of his game: His driving was impeccable, his iron play was better than it’s been all week and his putting was as good as it’s been all season. He stirred packed galleries into a frenzy on Mother’s Day while wearing his traditional red shirt. Fans young and old stood dozens deep, scurrying from tee to fairway to green, just for a brief peek at Woods.

“I hit it so good,” said Woods, glossing over a number of less-than-ideal wedge shots in the final round. “It was nice. I had control of it from tee to green. I made some putts.

I felt good on basically every facet of the game. Not to really mishit a shot today and only shoot 3under par is just weird, because I played much better than that.”

The back nine was his biggest issue all week, though. Woods was 11 under on including a the front, scorching 10 under during the weekend after making the cut on the number.

He was even on the back, which was slightly easier for everyone else. Still, the big-picture view is mostly positive for the world’s most popular player.

“There’s no way I would have predicted I would be at this point the beginning of the year, the way I was just coming back and just trying to get a feel for it and then hopefully have a schedule,” he said. “Didn’t know. But now I feel like I’ve got my playing feels and I’m playing tournament golf and I’ve got it.

I’m not that far off from winning golf tournaments.” Woods will take two weeks off before playing the Memorial Tournament, which potentially could be his final tune up before the U.S. Open in June.

He moved up 12 spots in the world ranking, rising to No. 80 after the Players. “He’s clearly playing some really good golf,” fellow golfer Jason Day said.

“If he got off to a half-decent start, I mean who knows what would have happened on the weekend. And he may be walking off with a third Players Championship.”

Simpson ended up with the trophy, which was about as surprising as someone hitting into the murky lagoon at the island green.

Woods could have made it much more suspenseful by making birdie at the difficult 14th, a hole that has given him trouble in recent years. He blistered his drive 354 yards to leave himself in prime position for another birdie. He came up just short of being really good and making the final round really interesting.

“I didn’t really miss a shot today, so I’m not that disappointed with it,” he said. “I hit it good all day long, and it’s just the way it goes.”

Previous post Guns: The power of illusion and the illusion of power