Time to put what Westbrook is doing into some perspective 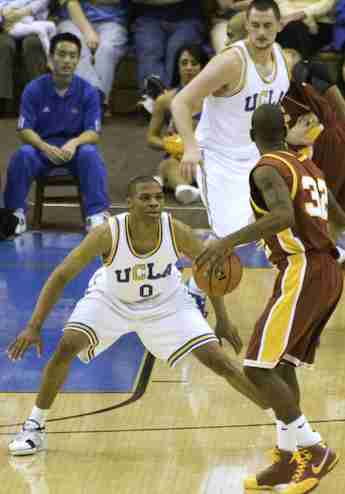 Perhaps that puts what Russell Westbrook is doing into some perspective. Through 21 games this season, such an outing represents an AVERAGE night for the Thunder guard – who’s putting up 31 points, 10.8 rebounds and 11.3 assists so far, with five triple-doubles in his last five games.

The last player to have such a triple-double run? Jordan, seven straight in 1989.

The only other players in NBA history with five straight? Wilt Chamberlain and Oscar Robertson.

“It’s amazing, man,” Oklahoma City’s Andre Roberson said after Westbrook’s 28-point, 17-rebound, 12-assist outing in Sunday’s win over New Orleans. “He’s a great guy and a great player. He makes the game easier for everybody else. He’s just an animal out there, so we’re going to need him to do that every night.”

Westbrook’s next game is Monday in Atlanta, against a Hawks team that has allowed just one opponent to record a triple-double on their home floor in Mike Budenholzer’s three-plus seasons as coach. (Rajon Rondo had 12 points, 12 rebounds and 10 assists at Atlanta on Nov. 18, 2015.)

Westbrook had 18 triple-doubles last season. He’s on pace to eclipse that by the All-Star break this season.

Heat coach Erik Spoelstra was without reserve guard Tyler Johnson for a couple days last week, while Johnson recovered from oral surgery after getting a tooth knocked out.

It was enough to get Johnson to finally give in and wear a mouth guard.

Spoelstra’s certainly not complaining, though he half-seriously said NBA players are going to look like football players soon given all the pads some are wearing underneath their jerseys and shorts.

“Thigh pads, hamstring pads, the way the game is played now with all the pick-and-rolls, you get hit all the time,” Spoelstra said. “Mouth guards … yes, we’re going to try to require everything that we possibly can.”

Spoelstra tries to stay aware of who on his team is wearing what, and often describes full-contact Heat practices as “pads up, mouth guards in” sessions.

Apparently, not every coach monitors things so closely. Celtics coach Brad Stevens said he had no idea about the protective gear his players use.

“I have never asked that question,” Stevens said. “Maybe I should know. Sorry. I’m an idiot.”

A look at some of the games to watch this week:

San Antonio at Milwaukee, Monday: The Spurs try to move to 12-0 on the road. The record for best road start is 14-0, set by Golden State last season.

Golden State at L.A. Clippers, Wednesday: The first Warriors-Clippers meeting of the season, but the third time Golden State has been to Staples Center.

Minnesota at Toronto, Thursday: Minnesota’s Andrew Wiggins gets a third chance to play in the city where he was born. He had 26 in Toronto last season.

Miami at Chicago, Saturday: The second time Dwyane Wade faces off against the Heat, after he and the Bulls won the first go-round in Miami last month.

Lou Williams, L.A. Lakers: He came off the bench to score 40 points on Saturday in a loss at Memphis. It was just the third time in the last 30 years that a Laker reserve went for 40 or more.