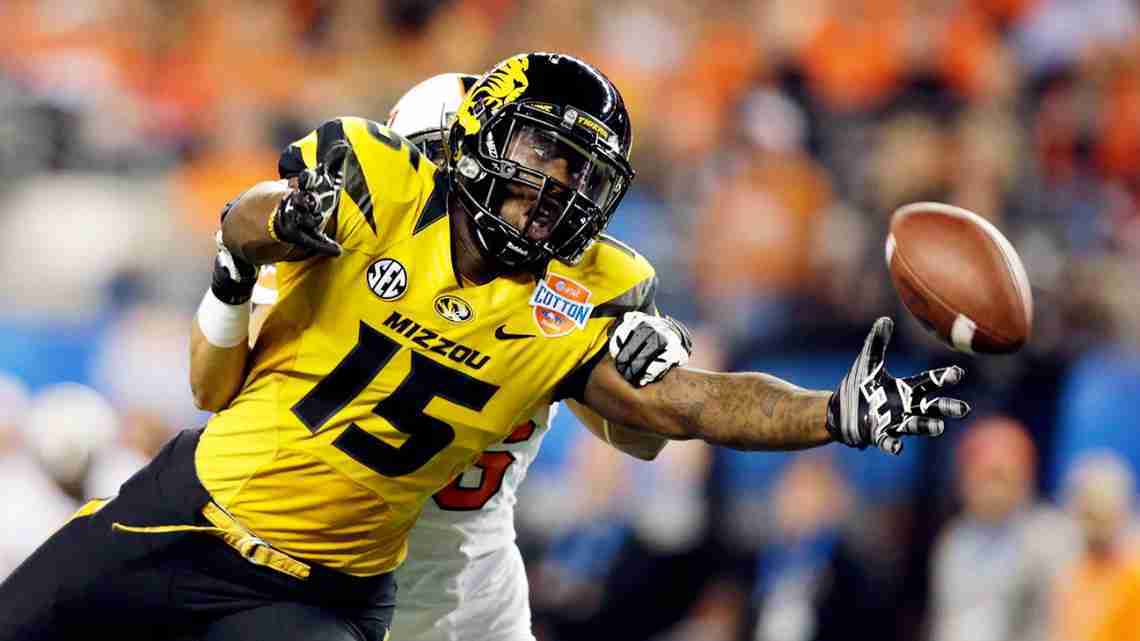 NASHVILLE, Tenn. (AP) _ Dorial Green-Beckham has only one worry, and that’s making sure he rehabs the tight hamstring that has kept the Tennessee Titans rookie sidelined the past three weeks.

Proving the Titans made the right decision by drafting him will come soon enough.

“Really making sure that I’m taking care of my body,” Green-Beckham said Monday. “All the other stuff got out of the way now, so I feel like being able to protect myself when I go out there and make sure I’m not overdoing my hamstring. I make sure I’m still getting work in at the same time.”

The talented wide receiver is embracing the chance to concentrate on football after being kicked out of Missouri a little more than a year ago for off-field issues.

Green-Beckham stayed out of trouble at Oklahoma last season where he essentially was a practice player only after the NCAA rejected his request to play immediately. Those issues cost him millions, dropping the 6-foot-5, 237-pound receiver from a likely first-round pick into the second round at No. 40 overall as the seventh receiver drafted.

He signed his deal with the Titans last week. The base salary is higher than the rookie minimums in the final three years of the contract, topping out at $1.19 million in 2018.

“I feel like overall I’m comfortable, just blessed,” Green-Beckham said. “I just feel like no matter first, second, third, fourth, fifth round, it doesn’t really matter as long as I get the opportunity.”

The Titans wanted Green-Beckham, who they hope will be big target for rookie quarterback Marcus Mariota, the No. 2 overall selection in the draft. Green-Beckham certainly stands head and shoulders above most of the Titans’ current receivers. Justin Hunter, who is 6-4, is the closest.

Now the team hopes Green-Beckham can duplicate his success during two years at Missouri, where he caught 87 passes for 1,278 yards receiving with 17 touchdowns.

Titans wide receiver Kendall Wright has been pushing the rookie to lose weight, possibly getting down to 225 or 230 pounds. Wright believes Green-Beckham can help the Titans immediately.

“You barely see guys that big that can do some of the things he can do,” Wright said. “He’s 6-5, 240, can run good routes. Fast. He can catch. All I’m asking him to do is get in shape like I had to do. I’ve been telling him just to stay healthy and just get trimmed down to maybe 230, 225, and then he’ll be unstoppable.”

Green-Beckham strained his hamstring during May’s rookie minicamp, and the Titans kept him off the field until Monday when the rookie took part in some individual drills. The Titans are guarding against Green-Beckham returning too soon with a three-day mandatory minicamp next week wrapping up their offseason program.

“I’ve been impressed with how he’s handled himself since he’s been here,” coach Ken Whisenhunt said. He’s worked very hard at it. He’s been a good guy. I just want to see him on the field, and we haven’t seen a lot of it. … He needs to lose a little bit of weight, but there’s no question the skill-set why we got him.”

All the questions have been about Green-Beckham off the field.

He was charged in October 2012 with marijuana possession while later pleading guilty to trespassing. He was arrested in his hometown of Springfield, Missouri, in January 2014 when police found a pound of marijuana in the car, though no charges were filed against him in that case.

Green-Beckham was dismissed by Missouri coach Gary Pinkel in April 2014 after a reported burglary during which a woman alleged Green-Beckham forced his way into her apartment and pushed her down a few stairs. He was neither arrested nor charged in the incident.

Green-Beckham insisted again Monday, as he did the night he was drafted, that the mistakes and immature decisions he made are behind him, and he’s focused on what’s ahead of him.

“I feel like now I could prove myself a little bit more, but overall, guys know being around me what type of person I really am,” Green-Beckham said.

Notes: The Titans were down to two centers Monday with Brian Schwenke and rookie Andy Gallik each sidelined by hamstring injuries. … The Titans have three more organized team activities this week.