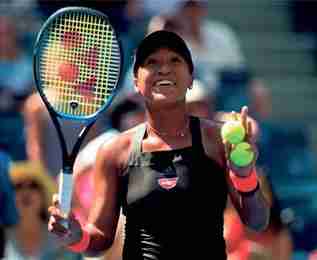 Playing in her first tournament since winning the U.S. Open, third-seeded Osaka impressed her Japanese fans Wednesday with a powerful 6-2, 6-1 win over Dominika Cibulkova to reach the quarterfinals of the Pan Pacific Open.

Osaka was in control of the second-round match from the outset, breaking Cibulkova’s serve in the first game at a sold-out Tachikawa Arena.

“My first match (since the U.S. Open) in Tokyo felt really special,” Osaka said. “I didn’t really feel pressure, I felt more excitement because I knew that a lot of people were watching this match. I felt really grateful.

“I’m just grateful I could play in front of you guys and want to thank everyone for their support.”

The local favorite raced out to a 4-0 lead before Cibulkova finally held to win her first game. Osaka hit three aces to close out the first set.

She broke her opponent three more times in the second set to win in just over an hour, hitting 25 winners to just nine unforced errors.

Two years ago Osaka lost in the Pan Pacific final to Caroline Wozniacki, who is the topseeded player this year.

Osaka was born in Japan to a Haitian father and Japanese mother. They were both in attendance Wednesday.

The shy 20-year-old Osaka, who has spent most of her life in the United States and lives in Florida, has been in the spotlight both on and off the court since returning to Japan last Thursday.

Osaka signed a three-year contract last week with Japanese carmaker Nissan — no financial details were released — and she is reportedly close to landing a large deal with Adidas, perhaps in the range of $10 million.

The U.S. Open title was worth $3.8 million in prize money.

Cibulkova has been in the midst of a resurgence since reaching the quarterfinals of Wimbledon and upsetting former No.1 Angelique Kerber on the way to the second week of the U.S. Open, but she couldn’t make a dent in the Osaka serve.

“It wasn’t a match I was proud of,” Cibulkova said. “I just couldn’t find my rhythm. She was serving so well. I felt I was in control of some rallies, but it was too hectic.”

Osaka will next face the winner of the match between Anett Kontaveit and Barbora Strycova. The world No. 7, who served 10 aces, said she is pleased with her game despite all the distractions of the past 10 days.

“As a whole I can say I played maybe, like, 80 percent,” Osaka said. “For me I never know the limit of what level I can go to.”