Utah Jazz work out Dekker, miss out on Hollis-Jefferson 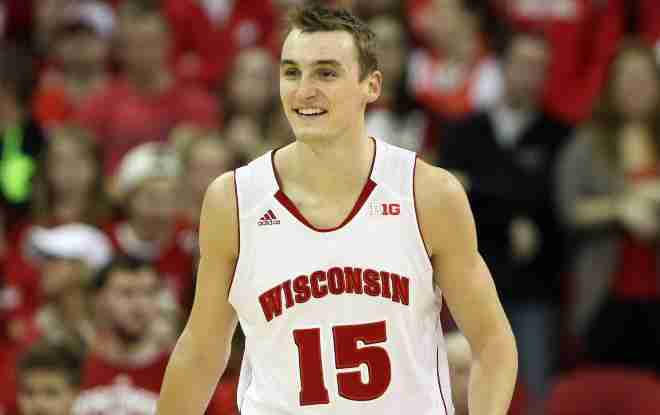 SALT LAKE CITY (AP) _ Sam Dekker was a little disappointed after his workout with the Utah Jazz on Friday. Vice president of player personnel Walt Perrin was, too.

All those feelings had nothing to do with the way Dekker performed. The disappointment centered on a lost opportunity.

The Jazz got an up-close look at the 6-foot-9, 219-pound Wisconsin forward during the team’s final workout before the NBA draft next week. It just wasn’t the exact look the organization was hoping for.

The team scheduled its last group of six with Dekker and Arizona forward Rondae Hollis-Jefferson as the headliners. Both are considered first-rounders that could be in play for the Jazz at No. 12 _ especially Dekker. Hollis-Jefferson worked out with the Washington Wizards on Thursday, but his flight out was canceled and he missed the session with the Jazz.

Perrin said Dekker had a strong workout but they were eager to see him matched up with Hollis-Jefferson, who’s known for his athleticism and defensive ability.

Dekker is on a mission to prove he should be a lottery pick and knows he’s in direct competition with a handful of wings expected to go in that range _ Duke’s Justise Winslow, Arizona’s Stanley Johnson and Kansas’ Kelly Oubre. Dekker averaged 13.9 points and 5.5 rebounds and was named second team All-Big Ten as a junior. He averaged 19.2 points and 5.5 rebounds during the Badgers’ run to the 2015 NCAA title game while shooting 57.1 percent from the field and 41.7 percent from behind the arc. Teams want to know if Dekker can keep shooting like he did in the tournament.

“That’s a question mark people have,” Dekker said. “Can he be consistent? I’m streaky at times from the outside. I think I’ve gotten a lot better. I shot it well today in drills. … I see myself as a good shooter. But I’ve got a lot of work to do and that’s one of those things I’m not going to be satisfied where I’m at.”

Perrin said he shot it well, but not great. At the same time, he believes Dekker can improve with more personal attention from NBA coaches. Perrin also wanted to see Dekker do some things off the dribble and test him defensively, but those were limited without Hollis-Jefferson. The other players at the workout weren’t the same caliber of athlete.

Dekker said he needs to continue to shoot with confidence and get his legs into his shot.

He believes his versatility, including passing and dribbling skills, sets him apart from other wings in the draft.

“Playing inside-out with my size,” Dekker said. “I think I’m one of the bigger wings at 6-9, but can still play like a guard or a forward in the post. So, versatility is going to be a big thing for me. Especially in the way the NBA, I don’t want to say transforming, but is kind of going. in a sense, positionless.”

Dekker made one thing clear _ he wants to compete. He was disappointed Hollis-Jefferson wasn’t there and said the Jazz’s depth at his position _ Gordon Hayward, Alec Burks, Rodney Hood _ isn’t a concern.

The Jazz are now in their final stretch of draft preparation after bringing in 101 players for workouts. Perrin said they’ll watch more tape, talk among themselves and with others around the league before Thursday.