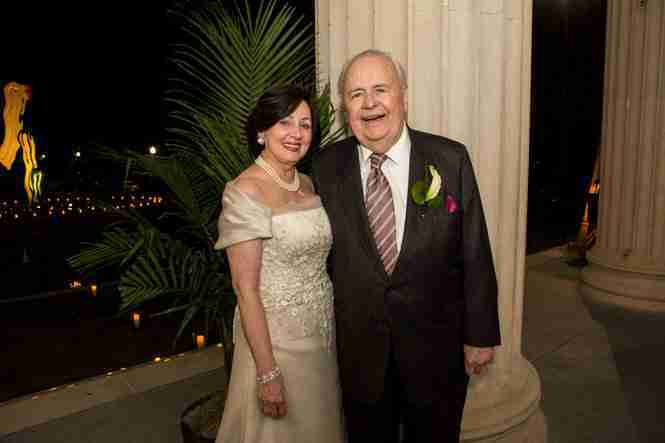 Benson chose his wife as his primary successor and disowned relatives who’d previously been in line to take over his business empire.

Tom Benson’s daughter, Renee Benson, and her children, Rita and Ryan LeBlanc, allege that Gayle Benson has isolated the 87-year-old New Orleans Saints and Pelicans owner from family and _ with help from key team executives _ manipulated him while he was in a weakened mental state.

The 68-year-old Gayle Benson, who became Tom Benson’s third wife in 2004, smiled and exchanged brief greetings with reporters on her on her way into court. But she remained silent when asked if she had any general comments about the allegations made against her by her stepdaughter and two of her step-grandchildren.

Following about 4 1-2 hours of testimony in a closed courtroom, Gayle Benson helped her husband, who was walking with a cane, into the back of their Mercedes-Benz, and said, “My baby’s tough,” to which Tom Benson added, “She made me tough.”

The Saints are holding an open minicamp next week, but trial was scheduled to resume Thursday afternoon, with the defense calling at least one of its final two scheduled witnesses: psychiatrist John Thompson and Tom Benson’s estate lawyer, Paul Cordes.

Gayle Benson has been credited by Saints and Pelicans officials with helping spearhead her husband’s philanthropic giving. In the past decade, the couple has donated millions of dollars for education, hospitals, the Catholic Church and the arts in New Orleans and San Antonio, the two communities where most Benson business interests are based.

Randall A. Smith, the attorney for the estranged heirs, described the mood in the court room as “serious,” during Gayle Benson’s testimony, but stopped short of calling it contentious.

Judge Kern Reese has closed the civil trial and issued a gag order in an effort to protect Tom Benson’s medical privacy rights. But before the case file was sealed, defense lawyers wrote that Tom Benson had changed his will because, after years of evaluation, he decided his daughter and two children failed to prove themselves as worthy successors of nearly $2 billion in businesses. Those businesses include auto dealerships, a bank, a television station and real estate holdings.

In a typed letter from late December that appeared to be signed by Tom Benson, the team owner also stated he was upset by how his daughter and her children treated Gayle Benson. He added that he could not put up with their hostility any further and was cutting ties with them. The letter was submitted as evidence by the estranged heirs, who contend it demonstrated actions and statements uncharacteristic of the father and grandfather they’ve known their whole lives.

The estranged heirs still stand to inherit hundreds of millions of dollars through trusts set up to benefit them. But Tom Benson has sought to swap out from those trusts interests in his pro teams and other businesses. One of the older trusts, which never included interests in the teams but does include business interests in the San Antonio area, is at the center of separate litigation in the Texas court system.

In that case, a judge has appointed temporary receivers to handle the trust which was previously controlled by Tom Benson.

In court documents in New Orleans, the estranged heirs have accused Gayle Benson of denying them access to their patriarch regularly last year, including when he was hospitalized. They’ve also claimed that Tom Benson changed his succession plan following a period in which he had often appeared heavily medicated, routinely became disoriented and exhibited “apparent memory lapses.”

This trial, which began June 1, has included nearly six days of testimony, having resumed Wednesday morning following a four-day break. The first witness called Wednesday was Dr. Kenneth Sakauye of the University of Tennessee _ one of three psychiatrists who performed mental evaluations of Tom Benson for the court. Sakauye was expected to provide a more neutral view; his involvement was agreed upon by the psychiatrists selected by each side: Dr. Ted Bloch III by the plaintiffs, and Thompson by Benson’s lawyers.

All three have been permitted to attend the entire trial, and after Sakauye’s testimony was over, he remained in court.

“Sticking around, Doc?” Smith asked Sakauye as they passed each other in a hallway during a break.

“I want to hear the rest of this,” Sakauye answered.

Next post Electric carmaker Tesla not giving up on Connecticut stores

Previous post Romo has no regrets over fantasy comments about NFL