Woods’ DC event to be held this season even without sponsor 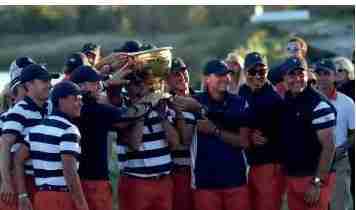 JERSEY CITY, N.J. – Tiger Woods’ tournament outside Washington is still talking to potential title sponsors, including Quicken Loans, which did not renew. But it’s on the schedule for the new season as The National, and PGA Tour Commissioner Jay Monahan says it’s not coming off.

“We made the commitment,” Monahan said. “Our players are going to be showing up there and we’re going to be playing for that amount of money ($7.1 million).”

The tournament, run by the Tiger Woods Foundation, originally was scheduled to return to Congressional for 2018. But with uncertainly over title sponsorship, the PGA Tour decided to opt out its contract with the club for 2018 and 2020.

Why opt out with such certainty of playing in 2018? Monahan said there is no guarantee the National will be played in 2019 and beyond. Being tied to a golf course – even one as storied as Congressional – might limit any negotiations.

”Let’s say we didn’t renew with Quicken and there was another sponsor and they had a different objective. They wanted to be at a different golf course, a different part of town.

They wanted to do something different,” Monahan said. “You can’t be wed to one golf course that might limit your ability to get a deal done.”

The tournament remains in contact with Quicken Loans, and there are conversations with other potential sponsors.

Still on the table is a scenario in which Detroit-based Quicken Loans might be interested in having the PGA Tour closer to its headquarters. But that would be after 2018. Monahan went from “highly, highly likely” to “it’s for sure in D.C. – I can say that” for the National to be held in Washington this season, with or without a title sponsor.

The course has not been determined. It was played last year at TPC Potomac at Avenel Farm.

The Houston Open also is without a title sponsor. Finding replacements is a priority for the PGA Tour, along with concern that Bridgestone might not renew its title sponsorship after next year of the World Golf Championship event at Firestone.

Next post Olynyk makes a big splash in Heat scrimmage