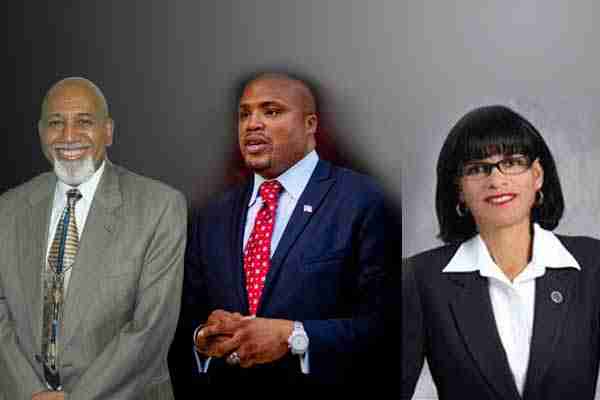 LAKE WORTH — From Congress to state representative to port commissioner to school board member, the few blacks in key elected office in Palm Beach County are hoping to retain their seats or win election for the first time, starting with primary voting on Tuesday.

Some races have heated up and many of the candidates showed up to make their pitches at a candidate’s forum held last week at the Lake Worth campus of Palm Beach State College.

Though not invited to the forum, the race for the Congressional District 20 seat, which has been held by Alcee Hastings for more than 20 years, has attracted two challengers. Both accuse the incumbent of not paying enough attention to his constituents.

“He has not been visible in the district,” Jean Enright, who has been a Palm Beach County Port Commissioner for 10 years, said in a telephone interview. “I would make sacrifices and make sure that I have town hall meetings and connect with the people. “We need to have a unified voice between the local community and Congress. I plan to bring honesty and integrity to the seat and I would be visible.”

Delray Beach resident Jameel McCline, a former heavyweight boxing champ, is also going after Hastings’ seat. He brings an interesting twist to the race with his colorful past.

McCline turned to the boxing ring after getting out of prison. He was 19 when he was sentenced in New York in 1989 for possession of a firearm. He spent five years behind bars and says boxing helped him to put his past behind him and become a productive citizen. It’s his first run for public office and he says Hastings’ long service in Congress doesn’t intimidate him.

“Not at all,” he said. “My background has prepared me to do the audacious, taking on the titans and slaying them,” McCline said. “I represent redemption, survival, and I represent the ‘little guy’ because I was the little guy.” Like Enright, he said Hastings hasn’t done enough in the district, particularly in the Glades area, where, he said, unemployment hovers at around 47 percent.

Hastings, however, has powerful support, including an endorsement by the Palm Beach Post, which said the incumbent has a track record of achievement in Congress.

Even in the midst of his own campaigning, the Post noted, Hastings is pushing for a high voter turnout to unseat Republican Gov. Rick Scott, promoting immigration reform and advancing universal health care. The newspaper said that while McCline has an interesting story, Hastings has a history of fighting for the issues, insightfulness and a track record.

Hastings could not be reached for comment for this story but in news reports he has rejected the claim that he is not visible in the district. He has said he understands the concerns of his constituents and has done much for them over the years.

He has also said it is nearly impossible for his opponents to know all he’s done in the vast district which stretches from Broward County all the way to the Glades and Riviera Beach.

Two black incumbents are vying to hold onto their seats on the school board. Debra Robinson is being challenged in District 7 by Piaget “Peppi” Hendrix, who is also black and did not attend the forum last week.

In the November general elections, in the Group 5 Port Commission race Kesnel Theus Jr., a Republican who is black, will challenge Peyton McArthur, a Democrat who is white, for the open seat.

And Democratic state Rep. Bobby Powell Jr. of District 88, will seek to fend off Courtney Antron Grace, a write-in candidate, also in the general elections.

Next post The cycle of death, anarchy and mayhem will persist