No vacancy: UNR dorms are already full for fall semester 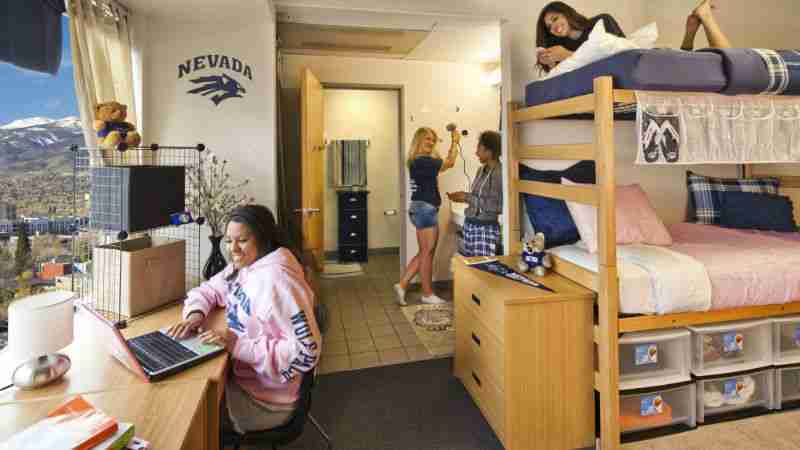 RENO, Nev. (AP) _ Living on campus at the University of Nevada, Reno may be more competitive.

Even the wait list stopped accepting applications in May for one of the 3,000 dorm spots. UNR hasn’t had to start a wait list until July in previous years.

Freshmen who have not secured a spot yet are likely out of luck, say officials.

And of the hundreds of UNR students who want to live on campus after the first year of college, only 300 were chosen based on high grade point average and number of credits. It’s a cut of about 50 percent from previous years.

Those who did not make the cut were turned away to make room for the growing number of first year students, said Jerry Marczynski, associate vice president for student life services and dean of students at UNR.

“We want freshmen living on campus because we know they are more successful,” Marcynski said, referring specifically to those from out of the area. Fewer than 100 freshmen from Washoe County live on campus the first year of college.

“We know they end up being surrounded with people with the same academic goals,” he said.

“I think we do a pretty good job explaining importance of living on campus that first year,” he said. “It means they are more likely to have a higher GPA and graduate.”

Attracting more students from southern Nevada and outside the state has helped contribute to a jump of nearly 10 percent in freshmen enrolled in 2014 than in 2013. UNR said that number will likely grow as it aims to top 22,000 students in the coming years. The freshmen class of 2020 may reach 4,000.

“More students want to live on campus,” said Jerome Maese, director of Residential Life, Housing & Food Services at UNR. “There are students who want to be able to roll out of bed and at the end of day crawl in to bed.”

He said students in intense academic programs and tough majors are looking for the option because they are busy with school work.

It’s one of the reasons UNR will open a science, technology, engineering and math themed residence hall in 2017. It will house about 450 students with about 75-100 being upperclassmen. The university hopes upperclassmen act as mentors to incoming students with similar majors.

In August, UNR will open its newest dorm, Peavine Hall.

Originally designed for 400 students in double rooms, UNR will make all 200 rooms into triples to accommodate more students.

It will house 600 students when it opens for the fall semester.

The 117,000-square-foot residence hall will have a wellness theme, Maese said.

Residents will be encouraged to focus on seven different dimensions of wellness ranging from emotional and physical to intellectual and environmental.

Also as the university expands and offers more on campus including a new fitness center scheduled to open in early 2017, students want the convenience, Marczynski said. Dorms reflecting a theme or common interest is just part of the campus experience.

UNR will conduct surveys on what type of housing students may want early in the fall semester.

Marczynski said the survey will ask students about types of housing, how far from campus and into downtown they are willing to live and what they expect to pay.

He said survey results would be available by November and will be used to help the university plan its growth including south into downtown Reno.

“I will help us decided what type of public or private partnerships and the direction we may go,” he said. “We will know what students are looking for.”