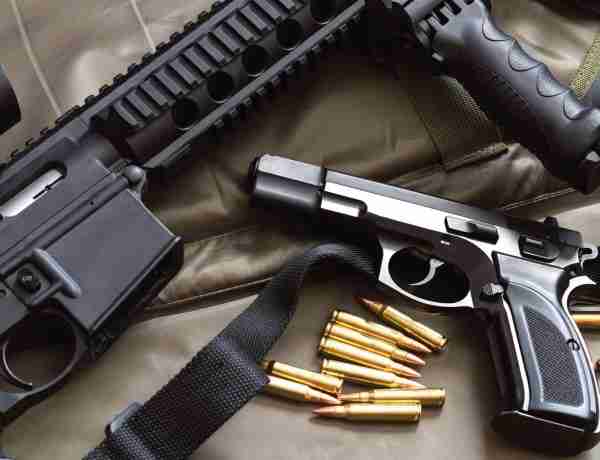 Buyers are concerned about the future, so they are preparing just in case, said Forrest Buckwald, the owner of Buck’s Gun Rack at 607 W. International Speedway Blvd.

“They want to do home defense,” Buckwald said, “and think maybe there will be a social breakdown, perhaps with the panic. They don’t know how bad the situation is going to get socially.” Shotguns and AR-15s are big sellers but handguns are doing well also, he said.

“They are deﬁnitely buying a lot more than they were two weeks ago, a lot more,” Buckwald said.

It seems that social distancing may be particularly tough to do in many of the nation’s gun stores with reports of shops packed with buyers stocking up on guns and bullets. A picture published recently showed people lined up outside a store in Los Angeles.

Ammo.com, which sells ammunition online, says it has had a big spike in business since February, according to its website, where a graphic details sales in states.

Flagler County Sheriff Rick Staly, a lifelong member of the NRA, said he understands that people want to be able to protect themselves.

“I certainly am a strong supporter of the Second Amendment and the right of the community to bear arms,” Staly said.

But he said he sees a similar rush on ﬁrearms when a hurricane is threatening or when a new political front less friendly to gun rights approaches. Staly said his deputies are taking steps to protect themselves from the coronavirus and will stay on the job making arrests.

“We are seeing a lot of unnecessary panic and concern in the community,” Staly said. “This is not Armageddon. People need to be concerned about their health.”

The increase in gun and ammunition sales started about 10 days ago at Bass Pro Shops, said Todd Blanchard, the general manager at the One Daytona location.

“Yes, we have deﬁnitely seen an increase in ﬁrearms sales,” Blanchard said.

He said it’s been mostly handguns.

“I think it’s just the fear of the unknown,” Blanchard said. “People are a little bit in panic mode.”

Ammunition was a big seller at Larry’s Guns and Ammo at 101 State St. in Bunnell.

Gun owners were buying all calibers of ammunition for rifles and handguns, said Kirk Chong, the store’s manager. He said 9 mm cartridges were selling the most.

“They are afraid if there is a nationwide lockdown and quarantine and if people start running out of food,” Chong said.

Business is also brisk at Volusia Top Gun, 2900 Bellevue Ave., said Ray Chan, the retail sales manager. He said he didn’t have much time to speak much because he had so many customers.

“It was packed yesterday and it’s packed today,” Chan said.

Late Tuesday, afternoon, the sales people were speaking to customers but there was room to keep a safe distance from most inside the retail store at Volusia Top Gun. Rifles were displayed on the walls and pistols were lined up inside a glass cabinet.

A few shoppers said they were not panic buying. They just liked guns.

Alberto Acevedo, 40, of Palm Coast, though, said he had been thinking about getting a gun but the coronavirus sealed the deal. He picked out a 9 mm pistol.