Out of tragedy, an entrepreneur, philanthropist watchmaker is born 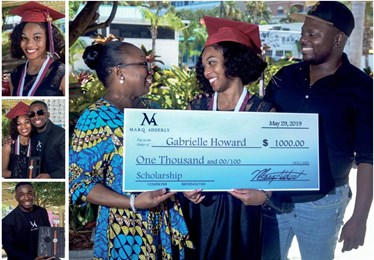 WEST PALM BEACH, Fla. – One would have to wonder how is it that this young millennial, Marq Adderly, is committed to making other people smile. After enduring the unimaginable, one would understand if he could barely see the light of day. But not only has Adderly endured tragedy of the greatest magnitude, he has also become a successful entrepreneur who is dedicated to giving back to the world, just as he was shown love when he needed it the most.

When Adderly was just six years old, he watched his father murder his mother…..right before his little eyes. He even tried to stop his father, but that wasn’t to be. His beloved mother lay in a pool of blood after being stabbed to death. His two brothers, one older and one younger also witnessed the tragedy and today, their emotional scars persist. In fact, one of his brothers was arrested last week for assaulting their grandmother and sending her to ICU. He is now behind bars on attempted murder charges without bail.

But Marq Adderly by sheer grace, has fared better than his siblings. And although he was riddled with guilt as a child (because he couldn’t stop his father), somehow managed to forge ahead in life, and with lots of help, has risen above the tragedy and is now a huge success story!

Adderly is the president, founder and CEO of Marq Adderly Watches, which is one of handful of black-owned watch companies in the world. And with awesome sales worldwide, he is now able to give back a portion of his proceeds toward scholarships for deserving students in Palm Beach County.

He awarded his first scholarship this Spring, when he surprised 18-year-old Gabrielle Howard, who will be attending film school in Atlanta this Fall with the help of his scholarship.

Her mother, Tracey Howard, was elated to learn her daughter received the scholarship. And she was even more touched, after learning Adderly’s back story. It brought her to tears. “I am just overjoyed, and I thank God for answering my prayers because financially I wasn’t able to afford her college endeavors. I’m overjoyed and really grateful to this young man,” she added. She and her daughter met Adderly for the first time on her daughter’s graduation day in May. Adderly had told the young lady that she was a finalist for his scholarship, when in fact she was the actual winner. He presented her a $1,000 scholarship and one of his custom watches. He made the presentation on the waterfront in downtown West Palm Beach.

She plans to study film and TV production and become a film director. “I enjoy telling stories in ways that they haven’t been experienced before,” said the budding film director. Her mother said she’s been making films since she was five years old. She had attended Palm Beach County’s most esteemed high school of the arts, (Alexander W. Dreyfoos School of the Arts), but transferred to Palm Beach Lakes High School so she could enter the early admissions program and get college credits. Adderly said she was a natural choice for the winner of the first Marq Adderly Scholarship. “Gabrielle was awarded the scholarship because she had extreme, extreme credentials and she was so confident. She already had her associate’s college degree while still in high school. She was most impressive and most deserving,” Adderly said.

Her older brother, Leo Williams, a professional opera singer, said his sister deserves all the best. “I don’t think it could go to a more deserving person. She embodies so many facets of what a great person is….I’m proud of her for remaining true to herself. She always uses her theater background to coach and help children at church. She really is a great person who deserves this,” he said. She plans to study at Savannah College of Art and Design in Atlanta and leaves l home in August.

Her mother says Gabrielle is simply using her gifts from God. “Film school is just a part of who she is. She’s been making short films since she was five years old. She’s very creative and very humble. She works hard and she’s very driven. She is my “She-ro.” She even motivates my friends! She’s an encourager and a leader, and she knows her creator,” said her beaming mom.

Adderly said he’s pleased to bring a smile to the Howards’ faces. it’s something he knew he would do –give back. “Any business that I have, I want to have an impact. My way of doing that is through this scholarship.”

Despite the tragedy, success has never He began the planning stages of his watch company around 2015, but officially launched Marq Adderly Watches in 2018. Though life has not been a bed of roses, he says he has fortitude and faith. Even as a young tot, he knew his Savior he said. “I knew who my Lord and Savior was,” he said, referring to the time of the tragic loss. And today he has some sage advice for anyone who wants to make a difference, despite the odds. “For anybody who wants to make change and make an impact on the world –never give up.”

To learn more about Marq Adderly Watches or his story, visit his website at: marqadderly.com