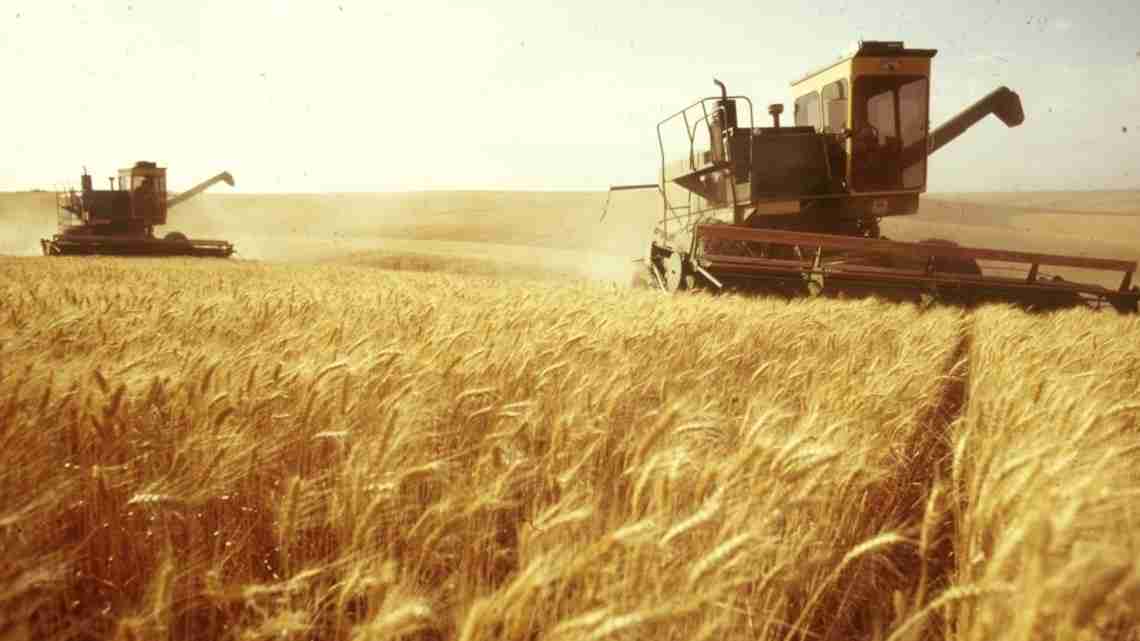 By TOM LUTEY
The Billings Gazette

FORSYTH, Mont. (AP) _ It was Wednesday on the first full week of July when Phil Steinberger came down with gold fever.

The farmer’s winter wheat spread like a golden blanket from the Steinberger’s back door to the scrub pines on his western boundary. A long streak of 90-degree days had drawn the last traces of chlorophyll from the field, and harvest seemed imminent.

Still might be too early to harvest, he thought. Even a golden field can still contain enough moisture to ruin a silo full of grain. Anything above 12.5 percent moisture can create rot. The penalty for jumping the gun is a year’s lost profits.

Steinberger climbed the ladder leading to the cab of his combine and with an ignition spark prodded a throaty rattle from the big green beast’s 30-year-old engine.

“Oh, I’m going to cut something,” Steinberger said. The harvest was too close. In the first cut, Steinberger’s grain tested out at 13.5 percent, but the following morning he was under 12.5 and ready go to.

Wheat farmers like Steinberger bet all their chips on one hand before the cards are even dealt, then wait for summer harvest to see if their gamble pays off. This year, it looks like only the lucky farmers will break even. Grain prices have been on a steady slide since last December.

On Friday, Northwest Farm Credit Services, a major agribusiness lender from Montana to the Oregon coast, reported that drought and extreme heat would limit yields in its area, though above average yields were expected in Eastern Montana. Wheat prices were lower than what many famers needed to pay bills.

A key Friday report from the U.S. Department of Agriculture put the reason for the price dilemma in blunt terms. The world is, for the second year in a row, raising astounding amounts of wheat, 722 million tons, second only to 2014 production, which was a record.

Steinberger is not among the Eastern Montana farmers with above-average yields. A very dry winter and spring cut his production to about 60 percent of last year’s yield.

Looking down from the cab of his John Deere 8820, Steinberger could see the red-brown Rosebud County earth beneath the wheat rows. A year ago, a thick crop eclipsed the soil entirely.

“My crop this year is about 40 bushels an acre. It was around 66 bushels last year. When the wind picked up, it would roll like the sea,” Steinberger told The Billings Gazette (http://bit.ly/1gvynve ).

Forsyth crops, at least the ones without irrigation, are being harvested earlier than usual this year, mostly because of hot, dry weather. At a time when many Montana winter wheat farmers say they are still at least two weeks out, combines in the Forsyth area are spitting out chaff.

Steinberger said he wouldn’t normally harvest before July 20, but this hasn’t been a normal growing year.

Winter wheat farmers like Steinberger sowed wheat last fall under extremely favorable conditions. August rains delivered up to 10 inches of moisture across some parts of Eastern Montana, more than many areas receive in an entire year.

The moisture gave winter wheat an incredible start, but then winter arrived and the moisture stopped. This spring, parts of Eastern Montana experienced brush fires and dust storms. In March, skiers in Red Lodge had to be evacuated because of a late-winter forest fire. Rains arrived in late May, but the timing wasn’t right.

Lack of rain cut Steinbeger’s yield, but the heat that came with the dry weather stressed his crop enough to drive up the protein, which at 10.5 percent was better than it was a year ago.

Protein is what makes Montana wheat valuable to foreign buyers looking to blend it with ordinary wheat to create flour good for making pasta. Montana farmers normally receive a premium payment for high protein levels, which aren’t usually found in wheat from other parts of the country, though premiums have been hard to find for the past year. Ordinary winter wheat has a protein level of no more than 10 percent. A 13 percent protein level is on the higher end.

The higher the amount of protein in wheat, the better the price. It’s been five years since prices this low were seen for Montana wheat, which has contributed from $1 billion to $1.5 billion a year to Montana’s economy in every year but once since 2008.

The test weight of Steinberger’s wheat was a solid 63 pounds per bushel, when workers at the United Grain elevator in Pompeys Pillar analyzed the grain Thursday. Test weights are a good indicator of flour extraction for wheat, with 60 pounds per bushel being on the high end.

There’s hope that poor weather conditions in the rest of the wheat growing countries will cut into the 2015 harvest and drive up price for whatever Montana delivers.

Cassidy Marn, Montana Wheat and Barley Committee marketing director, said drought in Canada is cutting into the Canadian Western Red Spring and durum wheat varieties that compete head to head with Montana for buyers in the Asian Pacific.

“Canada CWRS is a competitor, and it’s not looking good right now,” Marn said. “It could be a pretty good year for us if we could get through harvest” without a weather disaster.

But wheat farmers in Russia and Ukraine are expected to ship enough grain out of the Black Sea to make up the difference for losses in Canada and the EU. It’s a global market that sends price ripples all the way to Steinberger’s doorstep.