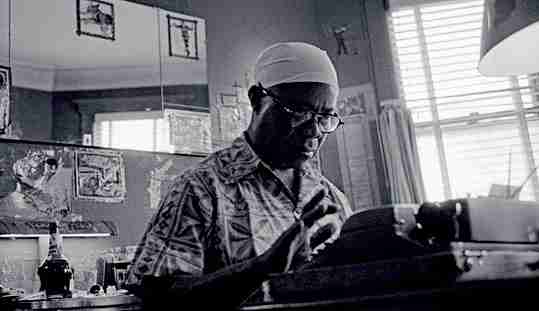 The just concluded 2022 Toronto International Film Festival roared back to its splendor with in-theater premieres and showings. Thousands upon thousands of international ﬁlm lovers flocked to cinemas, viewed the latest wave of diverse voices and watched Black ﬁlms that reflected Black life.

“Louis Armstrong Black & Blues” – Louis Armstrong wasn’t always understood. Some thought he was no more than an ever-sweating, always-smiling Uncle Tom. But others loved his warm personality, big heart, sweet sounding trumpet and that gravelly voice. This illuminating doc may move the needle for the naysayers.

Satchmo thought jazz musicians were ambassadors who traveled around the world bringing people together, especially Blacks and whites. Producer/director Sacha Jenkins (“Wu-Tang Clan: Of Mics and Men”) substantiates that notion by ingeniously showcases and analyzes all aspects of Armstrong’s tough life. Eschewing formulaic documentary technique, he largely lets Armstrong tell his own story, using the musician’s voice from conversations the legend recorded on reel-to-reel audio tapes. Most interviewees are off camera, their voices are used as narration and the trumpeter is center stage.

Armstrong’s life is on view in pictures, archival clips, TV shows, movies… Life started with an impoverished childhood in New Orleans, then a stint in a boys’ home where he learned the trumpet. He started a jazz career in Chicago, toured the globe and ﬁnally settled in Queens, NY archiving his memories.

Images of people from photos and newspapers are animated and along with words they magically move across the screen. Dizzy Gillespie, Artie Shaw, Ossie Davis and Miles Davis add comments. Kudos to cinematographer Ed Lachman and editors Jason Pollard and Alma Herrera-Pazmiño. High praise to Jenkins who crafts this doc like an intelligent artist or an artistic intellectual. Jazz, R&B, pop and rap musicians owe a debt to Armstrong, and this doc proves it. The magical sounds Satchmo created gave people joy, and so will this deeply affecting bio/doc.

“On the Come Up” – Hard to name a lot of rap movies that can put a smile on your face, but this will. Actor turned director Sanaa Lathan (“Love & Basketball”), blends “Boyz ’n the Hood” drama with “Straight Outta Compton” bravura. This exhilarating ﬁlmmaking is based on a novel by former teen rapper turned novelist Angie Thomas (“The Hate You Give”). Thomas’ story, as interpreted by screenwriter Kay Oyegun, rings true.

Teen rapper Briana, aka Lil Lawless (Jamila Gray), is the daughter of a famous deceased hip hop artist and she grapples with her mom (Lathan) who abandoned her as a tot. Bri “I lost my innocence the night she left.” Attending a predominately white high school further exasperates her anxiety. Life heads in the right direction when her manager Auntie Poo (Da’Vine Joy Randolph, “Dolemite is My Name”) gets her gigs at rap battles. She stumbles, but then excels.

Lathan connects to the culture and struggles of hip hop musicians. Tense rap battles play like heavyweight ﬁghts. Raw emotions between Bri and mom and the petite rapper and imposing male rivals burn. The niece’s ambition and her Auntie’s feeling of abandonment combusts. Poo: “You walking around like I didn’t change your diapers!” A very thoughtful subplot involves a teenage gay friendship/romance that feels normal as rain. In-your-face cinematography (Eric Bano, “The Forty-Year-Old Version”), powerful music (Daniel Wohl) and precise editing (Steven Rosenblum, “The Birth of a Nation”) help too. Gray is ﬁery, but Randolph’s hardcore Oscar-worthy take on Poo sears the screen. Bravo to Lathan for making “On the Come Up” shine bright like a diamond.

“Saint Omer” – Style trumps substance in this achingly sad French courtroom drama. Laurence (Guslagie Malanda), an African immigrant woman, stands accused of killing her 15-month-old child. Rama (Kayije Kagame), a pregnant novelist, comes to the Saint-Omer Criminal court room to witness the trial hoping for inspiration as she preps to write a book about Medea. The case and its motherhood themes haunt her.

Doc director Alice Diop imbues her ﬁrst feature ﬁlm with cryptic storytelling and the ingenuity of a veteran ﬁction ﬁlmmaker. Profound insights on immigration, colonialism and race are as front row as the clashes between Western European culture and African mores. Cinematographer Claire Mathon’s camera wistfully lingers on the distressed women’s faces. Pulsing music ampliﬁes the drama. At ﬁlm’s end Nina Simon’s moaning, haunting contralto sings “Little Girl Blue,” stating the obvious: “Sit there … count your ﬁngers … what else is there to do…” The eye-catching artistry and beguiling music should claim top billing.

“Sidney” – A Sidney Poitier documentary sells itself. Just capture his regal sense of dignity, and anything else is a plus. Old and new interviews let the Bahamian-born actor recollect his life span: Born premature, third-grade education, alone in New York as a teen, a dishwasher yearning to be an actor and an Oscar® winner.

The usual formula of TV clips, photos and countless interviewees elaborate on how he stumbled into career-deﬁning roles (“Lilies of the Field”), had an affair that cost him his marriage and transitioned from acting to directing. What’s on view seems a tad over-produced. Relatives, insiders and talking heads sit still under movie-star lighting, wearing fancy clothes or cool getups with fashionable hats. Their reﬁned images are more suited for a “Vanity Fair” spread than a momentous doc.

Instead, if they’d been ﬁlmed walking or driving around places that were vital to Poitier’s life and career (e.g., the Brill building), that movement might have made the footage more invigorating and less sedentary. When Opera Winfrey tears up, Harry Belafonte’s tells tales, and Poitier’s driver during the civil rights movement shares harrowing stories, an emotional core appears. This insightful doc has archived and shared Poitier’s spirit. But it could have been more. It could have been a gem.

“When Morning Comes” – A young widow (Shaquana Wilson) struggles to get her son Jamal (Djamari Roberts) a fresh start in Canada and out of Jamaica where bullies menace him. She: “Baby you are the best parts of me. I know you are destined for a better life.” First-time writer/director Kelly Fyffe-Marshall’s heart-warming spin on mother/child unions and immigration is fresh, yet classic. Classic like Euzhan Palcy’s iconic 1983 “Sugar Cane Alley.”

Fyffe-Marshall’s very natural characters and their island patois transports you to Jamaica, making you feel like part of the family. Some scenes feel preachy and slightly overwritten, making you wish visual clues had equal or more prominence. Wilson and Roberts make a convincing and loving family. The camerawork seems invisible. A pop-reggae musical soundtrack will lift your heart. Fyffe-Marshall’s introspective view of those who seek a better future elsewhere is a story that’s repeated all around the world, every day. She does it justice. Visit tiff.net.