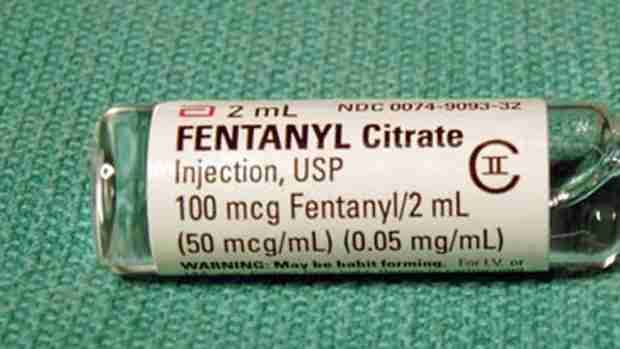 MONTPELIER, Vt. (AP) _ Police and public health officials in Vermont have been warning for months about the danger of the drug fentanyl, a powerful, synthetic narcotic they say has intensified their battle against the surge in heroin and opioid abuse.

Fentanyl is many times more powerful than other painkillers and heroin, dealers can make more money from its sales, and some users prefer fentanyl because of its intense high, said Lt. John Merrigan, who heads the state police narcotic’s unit.

“Most of your hard-core addicts, they are going to go for the better stuff,” said Merrigan. “They have to spend a lot of money just to feel OK, not to be sick. When you get to that level, it costs a lot to actually get high so if there’s a better batch out there you are going to go after it.”

Fentanyl is prescribed to treat pain. In its misuse, it has usually been mixed with heroin. The Vermont Health Department in 2014 reported that three overdose deaths in Addison County were caused by fentanyl that had been packaged as heroin.

Highlighting its dangers was confirmation by police Thursday that the overdose deaths of two brothers last month in Burlington were a case of “fentanyl intoxication.” Burlington police are offering a cash reward for information leading to the arrest of the person or people responsible for providing the drug to the brothers.

Vermont’s battle against the rise in heroin and opioid abuse goes back a few years. Since 2013, heroin and fentanyl-related deaths have risen sharply, the Health Department says. In 2014, Gov. Peter Shumlin dedicated his state of the state speech to calling attention to the problem.

Deputy Health Commissioner Barbara Cimaglio said fentanyl has been around for years, but its misuse has only recently become more of a problem.

“It increases the risk profile so if people are using something that is more apt to cause a bad reaction, overdose death, obviously that makes the challenge more severe,” said Cimaglio, who oversees the department’s drug and alcohol programs. “It makes it more dangerous for people who are users.”

Merrigan said the illegal production of fentanyl is on the rise.

“Instead of making crystal meth or something else they are getting all the precursors and components of fentanyl and making it illegally,” he said. “And there’s a ton of that here.”

At a May meeting in Randolph, attended by addicts and non-addicts, police warned about the dangers of fentanyl-laced heroin in the aftermath of the overdose death of a man found in a convenience store restroom. Last October, Hartford police said nine overdoses, including two fatalities, were caused by heroin mixed with fentanyl.

In some cases, people accustomed to using weaker versions of heroin might get the more powerful fentanyl-laced heroin and use it as though it were the weaker drug, said Hartford Deputy Police Chief Braedon Vail who helped investigate the overdoses in his community last fall, although he says the problem seems to have tapered off.

“It’s a two-sided sword, if you will, because you do have folks that know that they’re using it and may be aware of the dangerous consequences of it or just don’t care,” Vail said. “Then you have the other side, the folks that may not be aware that it’s laced with fentanyl.”