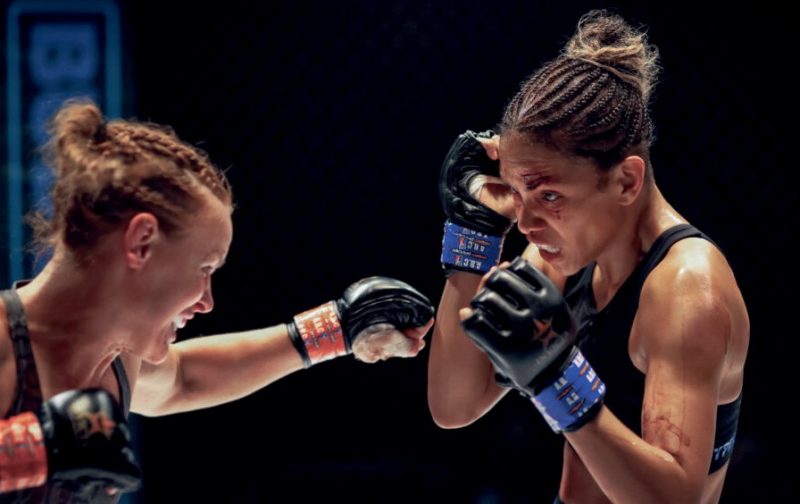 Normally the fest takes place in Miami, but this year ABFF’s Black ﬁlms screened on their streaming service ABFFPLAY.com. Berry’s new ﬁlm was one of the bright spots.

That’s a lot of challenges for the character to digest and a lot of plot devices for an audience to believe. Yet that’s what’s on the pages of the cliché script (Michelle Rosenfarb) that Berry uses as a blueprint. It’s like starting a boxing match with a weight on one foot. Respect the source material but know that its generic words and characters are putting Berry’s best intentions to the test.

Yet somehow, when the bell rings, Berry flies out her corner – as a director/actor – and ﬁnds a way to build a story with heart and momentum that lasts until the ﬁnal round.

Drinking her troubles away isn’t helping Justice’s plight. Her failed MMA career has reduced her to cleaning houses and scrubbing toilets to make money.

One fateful night, her volatile boyfriend and smarmy manager Desi (Adan Canto) coerces her into attending an underground, unsanctioned MMA match. Through a mishap, Justice gets to show she still has ﬁght in her bones. A sleazy promoter (Shamier Anderson) offers her an opportunity for a champion bout.

It’s a glimmer of hope complicated the day her mom (Adriane Lenox) shows up with a surprise: “That’s your son. His daddy died.”

The baby she gave up at birth is now a kid named Manny (Danny Boyd Jr.).

The script packs on so much melodrama and backstory that it stretches reality way past any norm.

But even these trifling machinations-don’t stymie Berry’s solid instincts as a director. She pulls decent to good performances from her cast. The martial arts ﬁghts are well staged and photographed (cinematographer Frank G. DeMarco). Everyone is cast appropriately and wears clothes that reflect their being (costume designer Mirren Gordon-Crozier).

If the editors, Jacob Craycroft and Terilyn A. Shropshire, had exhibited tighter control, 10-15 minutes of excessive footage would be on the cutting room floor and scenes wouldn’t drag in this longwinded 2-hour 9minute ﬁlm.

Canto as the brute boyfriend is suitably threatening and temperamental. Anderson as the sketchy promotor is equally immoral. Great to see Stephen McKinley Henderson (“Fences)” in any movie, and especially here as a coach who steps up when Justice needs him most. Lenox (“The Blind Side”) plays the ﬁghter’s tough-talking mother as a woman who gives what she gets in verbal spats. Sheila Atim (“The Underground Railroad)” digniﬁes the role of Buddy the trainer/lover and steals scenes with her stoic presence.

Berry’s skills behind the camera are a work in progress. In front of the lens, she is a virtuoso. No noticeable makeup, glamor or her trademark sexiness. She looks her age (55), and her face appears as weathered as that of any pugilist who wears her profession’s bruises and scars with pride. She gets angry, sad, lost and loving – always playing the emotions deep.

Her best acting is reserved for the ring. Body blows, punches and chokes holds – she makes it look like Justice is ﬁghting for her life.

Says Jackie to Buddy. “I have to ﬁgure my life out… I have to do it on my own.”

Similarly, Berry seems very motivated to pursue her goals as a director and shows great promise. She’s got it. Audiences will be impressed.

For more about ABFF go to ABFF.com. To screen ABFF ﬁlms all year, try ABFFPLAY.com.