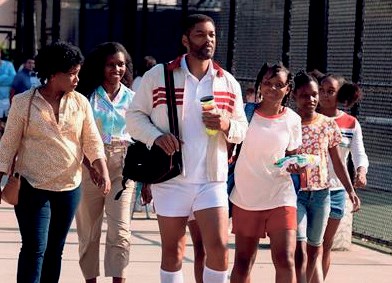 The spirit of the prescient planner, dreamer and barker Richard Williams, the work ethic and faith of his wife Oracene “Brandy” Price, coupled with the talent of Venus and Serena molded the Williams sisters into tennis icons. It’s a clear, self-empowering force that’s echoed in this inspiring, Oscarworthy bio/ﬁlm.

Once upon a time, in the low-income neighborhood of Compton, Los Angeles, a doting father and smart mother have a keen vision for two of their offspring: “Venus and Serena gonna shake up this world.” A non-traditional path leads them in, out and around the normal white bread, upper-class tennis system, ultimately helping them achieve monumental goals. It’s the American dream personiﬁed, and “King Richard” provides a visual roadmap others can follow.

One of the smartest decisions the ﬁlm’s producers made was hiring tennis-lover/screenwriter Zach Baylin (“Creed III”) to write and nurture a script that focuses on a segment of time, and not the entire Williams story. After some background plotting, this glimpse begins when Richard approaches coaches to get Venus on the junior circuit.

Within this narrowly focused window, the screenplay thoroughly develops the characters as they face familial challenges, neighborhood bullies and a skeptical tennis world. The smaller, intimate canvas – fewer people and settings – solidiﬁes the characters’ identities, thoughts and feelings, which are sometimes manifested in poignant often humorous dialogue: As Richard drives past a cemetery he says to his kids: “Say hi to the people that are gone.”

The bane of many tennis movies is that producers frequently hire actors who can’t swing a racquet like a pro. The genius of hiring Saniyya Sidney (“Fences”) to play Venus and Demi Singleton (“Godfather of Harlem”) to portray Serena is that either they’ve played before, or someone showed them how to produce ground strokes exactly the way the real sisters do.

Many will cite the outstanding performances of Will Smith as Richard and the very talented Aunjanue Ellis (“If Beal Street Could Talk”) as Oracene as the foundation for this thoughtfully written, acted and directed ﬁlm.

Tennis players, however, will point to the realistic serves, strokes and volleys and the exposure of some of the professional game’s most irritating quirks – e.g., taking strategic but unnecessary bathroom breaks during a match to disrupt your rival’s focus. It’s frowned upon, but still legal.

Smith may gain an Oscar nom for his all-in performance in a very showy role about a goal-achieving yet imperfect man. He’s got the mannerisms and speech pattern just about right, but if you peek behind Richard’s curtain, there’s Will Smith pretending to be Williams. If Delroy Lindo had been cast, his skills, natural physicality and self-assuredness would have made his performance invisible. Ellis is quite endearing as the mom who demands r-e-s-p-e-c-t. Sidney, Singleton and all the other young women who play the sisters at different stages melt into the scenery – it’s like watching kids in real time. Tony Goldwyn’s interpretation of the sisters’ ﬁrst coach, Paul Cohen, is ﬁne. Jon Bernthal (“The Punisher”), as their kinetic coach Rick Macci, is far more impressive in a pivotal role: Richard reminds the coach who is king: “You’re like a member of our family. But you work for us!” Kris Bowers’ (“Bridgerton”) musical score tweaks emotions in all the right places. The Williams’ home looks lived-in, thanks to production designers William Arnold and Wynn Thomas. Costume designer Sharen Davis (“Dreamgirls”) gives the family clothes that look like they’re off the rack at TJ Maxx. Clean but not too flashy.

All the tech efforts are artfully captured by cinematographer Robert Elswit (“There Will Be Blood”) and given a steady rhythm by editor Pamela Martin (“Battle of the Sexes”), which makes this two-hour, 18 minute chapter of a bigger life story move quickly.

Director Reinaldo Marcus Green (“Monsters and Men,” “Joe Bell”), with the classic against-the-odds script, heaps so many challenges on the family you’ve got to root for them.

Green milks the drama out of the gangs that threaten Richard, the husband/wife strife and the tennis world ambivalent about opening its doors to interlopers. His direction is as moving as the performances and storyline.

If there is one weakness in the production, it’s the language. “The Harder They Fall,” a recent rough-’emup gang style Black cowboy movie, didn’t use the “N” word. So, why does this “family movie” drop the “N” bomb? The real sisters don’t use that word. Why do children – especially Black kids – have to listen to this kind of language? It’s a flaw that could have been ﬁxed in post-production.

It’s easy to enjoy this classic, disarming American saga. Easier to watch the father, mother and daughters shake up the stodgy world of tennis. Expect audiences – in theaters or their living rooms – to applaud everyone’s efforts. Richard knew his family’s day would come: “I’m in the champion building business.” Yep.

In theaters and on HBOMAX Nov. 19.