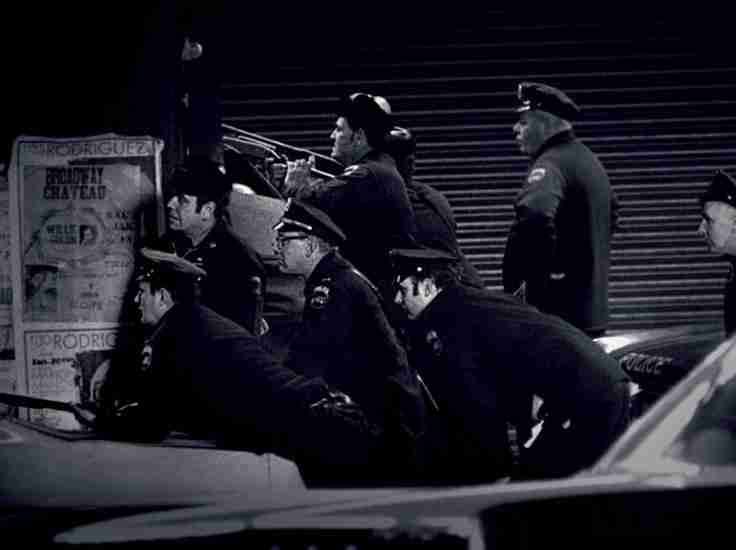 When there are so many ﬁctional, burly varieties of heroes so regularly on movie screens, it’s jarring to see that the genuine article can be a humble, gaunt former trafﬁc cop who believed in the power of talking.

Harvey Schlossberg, who had a doctorate in psychology, is one of the faces of Stefan Forbes’ gripping and illuminating documentary “Hold Your Fire,” which chronicles a 1973 robbery of a Brooklyn sporting good store that turned into a hostage standoff that lasted 47 hours with throngs of observers and protesters huddled nearby beneath the elevated subway.

The scene is classically New York, with masses of police on the brink of a siege and a city simmering with tension and anger. If it sounds like something out of “Dog Day Afternoon,” it was. The Brooklyn bank robbery that inspired Sidney Lumet’s 1975 ﬁlm had taken place the year before. All of this was in the aftermath of the Attica prison riots and other violent hostage standoffs like at the Munich Olympics.

By then, Schlossberg’s belief that there was a better way to deescalate such high-pressure situations had hardened. Police ofﬁcers, he realized, were trigger happy, ready to take out suspects if they had a shot. He wanted to change a culture that refused to negotiate with killers.

“But I don’t think it works that easy,” Schlossberg says in the ﬁlm. “That’s a Hollywood thing.”

“Hold Your Fire,” which IFC Films opens in select theaters and via digital rental Friday, burrows into the real roots of an oft-replayed movie scenario with insight and care. The ﬁlm, featuring both archive footage and present-day interviews, convincingly suggests that the 1973 standoff was a birthplace of hostage negotiation. Given that peaceful resolution in police encounters remains such a contemporary issue, too, “Hold Your Fire” has the feeling a key battle revisited in a tragically long, ongoing conflict.

The incident started when four young African American men – Shuaib Raheem, Salih Abdullah, Dawud Rahman, and Yusef Almussidig – attempted to steal guns from John and Al’s Sporting Goods store in Williamsburg, Brooklyn. Before they could flee, they were cornered by the NYPD and instead stayed put, taking hostages with them. In the shooting that followed, police ofﬁcer Stephen Gilroy was shot and killed.

Police descended en masse around the sporting goods store. That this, too, would end with further bloodshed seemed a certainty. Enter the police psychologist Schlossberg, whose deescalation tactics and handbook of police psychology would go on to train thousands of ofﬁcers and establish New York’s ﬁrst hostage negotiation team.

“It was the old Wild West,” Schlossberg says in the ﬁlm. “I told the commissioner: `If you get words going, then you can calm them down.”’ “Hold Your Fire,” though, is more than a tribute to Schlossberg, who died last year. Forbes cuts between interviews with both the robbers (all of whom were jailed for decades) and members of the police, creating not just a “Rashomon” of events but highlighting the tragic disconnect between the two sides. How much racism is at play is up for debate, but what isn’t is that the overwhelmingly White police force has little understanding of the largely Black community it is policing.

Shu’aib Raheem, who dedicated himself to restorative justice upon leaving prison, is especially contemplative. He speaks not just about what drove them to the crime in the ﬁrst place or the possibly unjust things that happened along the way, but the remorse he can’t get away from at doing anything that led to loss of life. “I don’t know,” he sighs. “It don’t think it really matters at the end of the day.”

As “Hold Your Fire” moves along, you can feel that all the talking in the ﬁlm, too, has helped bring out everyone’s shared humanity. There’s one scene where a police ofﬁcer watches a clip of one of the criminals speaking regretfully in an interview, and he seems to come away with a deeper empathy for him. “Hold Your Fire” is, itself, a testament to Schlossberg’s gospel.

“Hold Your Fire,” an IFC release, is not rated by the Motion Picture Association of America. Running time: 95 minutes, 3½ stars out of 4.