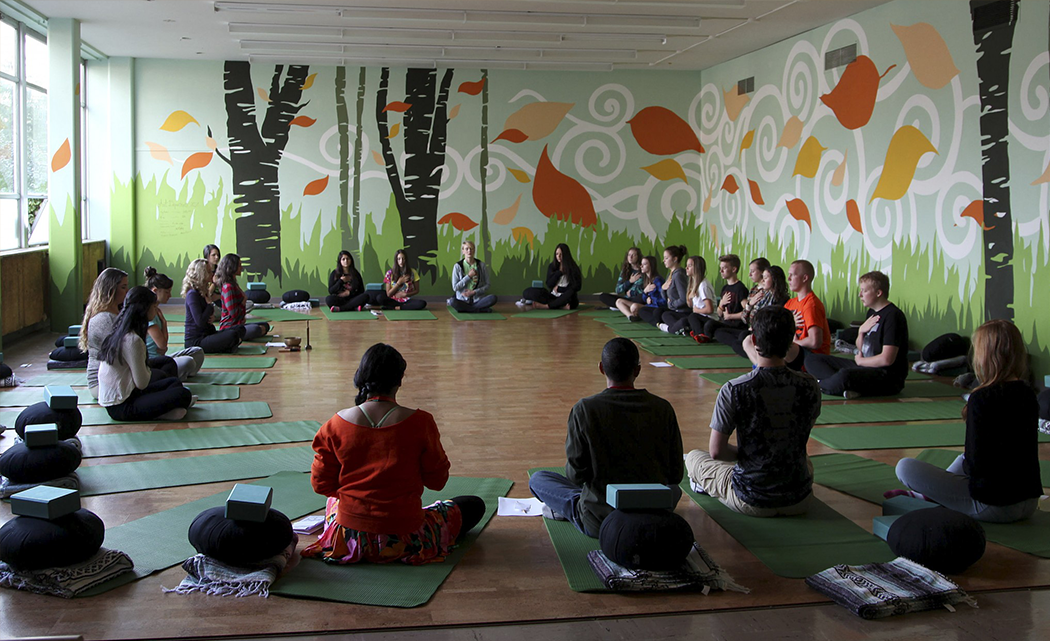 PORTLAND, Ore. (AP) — As the morning school bell rings and students rush through crowded corridors, teenagers in one Portland classroom settle onto mats and meditation pillows. They fall silent after the teacher taps a Tibetan “singing bowl.”

“Allow yourself to settle into the experience of being here, in this moment,” teacher Caverly Morgan tells two dozen students at Wilson High School.

The students are enrolled in a for-credit, year-long mindfulness class meant to ease youth anxiety and depression and to prevent violence. For 90 minutes, three days a week, they practice a mix of yoga, sitting and walking meditation, visualization techniques, deep breathing, journaling and non-judgmental listening.

The idea behind mindfulness is that focusing on the present moment helps a person deal better with stress, difficult emotions and negative thoughts.

Mindfulness, yoga and meditation have gained popularity among Americans in recent decades, buoyed by studies showing their benefits to emotional, mental and physical health. The centuries-old practices have roots in Buddhism and Hinduism, but Western culture has secularized them to focus on physical postures, breathing and relaxation techniques.

Such practices are now offered by corporations like Google, Target and General Mills to their employees. Prison inmates, hospital patients and the U.S. Marines are using them to combat stress and illness, increase focus and well-being. And now schools all over the country are introducing the practices.

Some people have greeted the move with less than enthusiasm.

Last year, an elementary school in Ohio ended its mindfulness program after parents complained it was too closely linked to Eastern religion and a conservative Christian law firm unsuccessfully sued on behalf of a couple in Encinitas, California, arguing their school district’s yoga classes indoctrinate children.

But many school districts are reporting success.

In Richmond, California, where a teacher started a mindfulness program called the Mindful Life Project, schools have reported drops in detentions and referrals among low-income, at-risk youth.

The school district in South Burlington, Vermont, implemented a successful mindfulness course as part of a health and wellness program, and now administrators there have written a manual on incorporating mindfulness into K-12 curriculums.

Portland is known for its progressivism, so it should be no surprise the idea of teaching mindfulness is being embraced here. Students at Wilson say the class has been a boon for them.

“Sometimes I have trouble breathing, I have panic attacks. This class helps me bring more attention to my breath and overcome that,” junior Cassia McIntyre said. “I’m less stressed out and able to better cope with stress.”

The class is the brainchild of Morgan, who trained at a Zen Buddhist monastery for eight years and opened a meditation center in Sacramento. After moving to Portland two years ago, Morgan started her program Peace in Schools and teamed up with Allyson Copacino, who teaches yoga to children.

The two started an after-school program at Wilson. After hundreds of students signed up, principal Brian Chatard took note. The school was dealing with a student’s suicide, and few resources were available to address students’ emotional and mental health.

Chatard said high school years are hard for many students, because they entail emotional and hormonal changes, social and academic pressures — and for some, depression.

“High school is the hardest period of time for kids,” Chatard said. “You’ve got emotional changes, hormonal changes, all the social pressures. It’s also the onset of mental illness for some kids, depression hits, and there’s the pressure of college and sports. All these things kids do is overwhelming without having a strategy to deal with it.”

During a class in October, after a half-hour of yoga exercises, Morgan asked students to visualize a stressful moment in their lives and notice the negative internal dialogue in their heads.

Students wrote the negative self-talk in a journal, then shared it with the class and practiced compassionate — non-judgmental — listening in pairs.

Learning how to recognize the “inner critic” is crucial for teens, Morgan said.

“It’s very important that teens learn how to do that, because that critical voice leads to behaviors that are extremely unhealthy, such as overeating, bullying, even committing suicide,” Morgan said.

Pediatric psychologists at Oregon Health & Science University are partnering with the mindfulness program to study its impact on students.

A similar yearlong program is offered at Rosemary Anderson High School, an alternative school in nearby Gresham that serves students who were expelled or dropped out, are homeless or single parents.

Unlike at Wilson, mindfulness at Rosemary is mandatory for some 70 students, many of whom knew little or nothing about it. Some of the students were initially skeptical and complained about the course, the principal, Erica Stavis, said.

But on mid-term reviews, students reported the class had helped them better recognize their feelings, deal with anger and distance themselves from destructive thoughts during difficult family situations.