Scary payback on view as Elba is man against ‘Beast’ 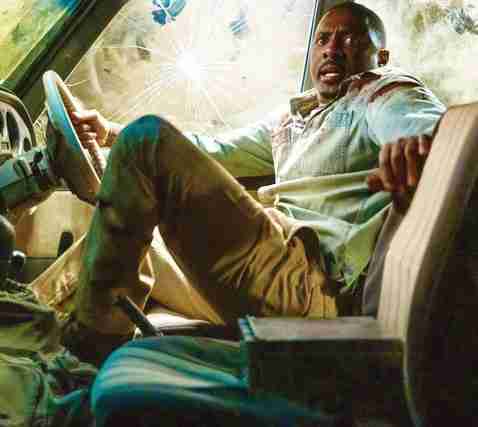 If the job of an act/thr/hor is to scare the daylights out of you, “Beast” gets the job done.

The success of this ﬁlm’s eye-catching, ear-grabbing hocus pocus can be traced back to smart direction, near seamless visual/sound effects, tight editing and the supremely talented Idris Elba.

“Cujo as a lion” was the goal. Screenwriter Ryan Engle (Rampage) set the stage, created the characters, put the story in motion and pitted man against beast and beast against man in a fathomable setting. The movie’s rogue lion may be bigger than life, but the setup is so feasible, it hooks you.

Awe and bickering breakout on a plane hovering over South Africa’s gorgeous terrain. Dr. Nate Samuels (Elba) and his teen daughters Meredith (Iyana Halley) and Norah (Leah Jeffries) are returning to the motherland where he met his now deceased exwife. The couple’s breakup, her death from cancer and his time-consuming career are the bones of contention. Samuels: “I need you to forgive me.” Upon arrival, the three are greeted by their old family friend Martin (Sharlto Copley, “Maleﬁcent”), a wildlife biologist who manages an expansive game preserve.

The happy reunion and a tour of the environs are cut short when Martin discovers a village whose citizens have been savagely mauled to death by what appears be a large lion. The formidable beast hunts humans not as prey, but for revenge. Poachers have killed off his pride of lions, and this ferocious cat wants payback. Danger looms when the four get stranded and radio communications fade. Are they doomed? Martin: “You don’t understand, we’re in his territory now.”

Considering all the tourists who go to Yellowstone and get mauled by bears or bison, the premise seems possible. However, a leap of faith is required to believe that this crazed lion is bigger and badder than normal. Its size and sheer brutality will require audiences to suspend disbelief for 93 very succinct minutes (editor Jay Rabinowitz, “8 Mile”). And this “Cujo” on steroids aspect takes the ﬁlm from act/thr/dra to horror. Those who prefer realism, may be disenchanted. Genre fans who covet gore galore, may feel unfulﬁlled. But no one can deny the scariness on view.

The depth of emotions and relationship woes between Nate and his daughters feel viable enough to pull you ﬁrmly into their family strife. The way the ﬁlm is written, Martin and Nate are not over-exaggerated super-heroes, they’re just courageous. As Mer and Norah squabble and make bonehead decisions, they exemplify teen angst and become endearing. These characters make you feel you’re stranded with them, in the middle of nowhere and fearing for your life.

Icelandic director Baltasar Kormákur’s (“Everest”) task is not easy. Help the actors project fear, coordinate vital visual, special and sound effects, balance sustained moments of dread with scary, credible bone-chilling bursts of violence. But, he gets the job done. You’ll be so engrossed, jumpy and petriﬁed you’ll forget the fakery as tension builds and builds and builds…

The actors who play poachers court disdain. Copley as Martin seems earnest, while Halley and Jeffries display the right mix of naivete and courage as the attention-starved daughters. But honestly Elba is the kingpin. He helps create illusions of animal attacks that feel horrifying. As the beast bangs down the doors of his truck, eager to maim and kill, fear and emerging bravery is expressed on his face, in his emotions and actions. The guilt-ridden dad morphs from absentee father to protector, leader and braveheart and that transition is a marvel. The kind of magic only a skilled thespian can deliver.

“Beast” is a guilty pleasure rife with danger, terror and peaked emotions. It will scare the hell out of you. But isn’t that what you want?