Stellar ensemble cast at the top of their game in ‘Black Panther: Wakanda’ 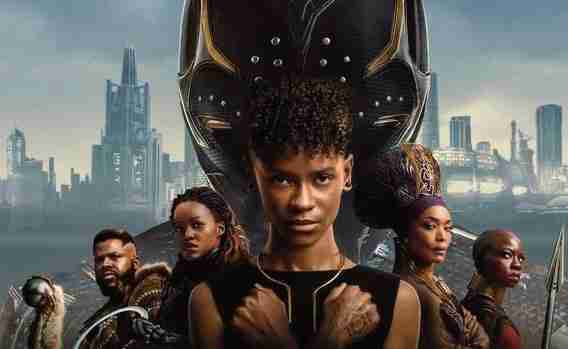 Wow! You’ll say that over and over again as this mind-blowing, superhero epic unfolds. Wow!

The loss of King T’Challa (Chadwick Boseman), aka Black Panther, weighs heavily on the people of Wakanda. More so on his sister Princess Shuri (Letitia Wright) and his mother Queen Ramonda (Angel Bassett). They try to move forward but are paralyzed with grief. A sorrow so deep it shadows their attempts to keep their nation safe. Outside forces covet their precious metal Vibranium, which absorbs, stores and releases super amounts of kinetic energy. They must remain vigilant.

The royals think they are alone in their struggle against the outer world, until they encounter an interloper. Namor (Tenoch Huerta Mejía, Son of Monarchs) is the emperor of the hidden undersea kingdom of Talokan. His people are of Mayan ancestry. He offers them an opportunity to ﬁght mutual enemies. “You want to burn the world? We’ll burn it together.” Can he be trusted? Is combat against anyone the answer? Some say no: “If you go to war for vengeance, it will never ﬁll the hole in your soul.”

How do you go on after Boseman’s death? It’s hard to fathom, but a mission writer/director Ryan Coogler and cowriter Joe Robert Cole ruminated over and planned out perfectly. Their attention to detail and quest to honor the legacy of the actor and character is evident in every frame. They start the movie on a spiritual plain and end it the same way. The superhero is gone but his essence remains. Shuri steps up. But burying herself in creating new warfare technology to protect Wakanda does not shield her pain. Smart as she is, she has so much to learn. Her voyage of self-discovery drives the ﬁlm for 2h 41 min.

That intimidating length shouldn’t be of concern to ardent fans. Yes, a few scenes could be slimmed, some backstory sequences shorter and the less exposition would be better. However, for the most part, editors Kelley Dixon, Jennifer Lame and Michael P. Shawver clip the footage in a way that makes time goes by as it should. Not too fast. Not too slow. Just right. As the story evolves, taking you in directions you couldn’t deem possible, the majesty of what you’re viewing and its thesis on dealing with death grip you visually and emotionally in the most astounding ways.

Wakanda, Talokan and all points between or beyond are stunning to behold. The royal chambers, underwater world, battle ships, etc. are awe-inspiring (production designers Hannah Beachler, Jason T. Clark). The colors are radiant or murky as they should be (art direction Marlie Arnold, Cameron Beasley, Laurel Bergman and Jason T. Clark). Regal attire and Namor’s ethnic jewelry and garments are glorious or suitable costumes (Ruth E. Carter).

Action scenes to dance sequences are captured and lit like they belong in a blockbuster movie (cinematographer Autumn Durald Arkapaw). Composer Ludwig Göransson’s thrilling score intensiﬁes emotions from woe to bravery and the eclectic world music playlist (Burna Boy, Alemán, Blue Rojo, Tems), highlighted by a haunting theme song, “Lift Me Up” sung by Rihanna, is a keeper.

Coogler and Moore’s script takes the audience into a heady, ethereal dimension that’s as Afrocentric in nature as the original Black Panther. But this sequel is different. New. Female centric too. The way Queen Ramonda confronts the nation’s adversaries on world stages is so confrontational and unapologetic she should be running the U.N. It’s a dignity, grace and strength that Bassett brings to all her characters. However, she is in her glory as the exasperated matriarch: “My entire family is gone. Have I not given everything!” She deserves an Oscar nom for Best Supporting Actress.

It’s almost as if the rest of the cast takes their lead from her. The professionalism, the wrangling of the emotional core of each character, the flawless diction and steadfast performances come from a stellar ensemble cast at the top of their game, as guided by Coogler’s intuitive direction.

Wright strikes the right chord between bravery, vulnerability and mourning. Her Shuri searches for answers in imperfect ways, stumbling as she goes. The very hard-driven Namor, whose nation’s survival comes ﬁrst, is her perfect foil. Mejía’s interpretation of this aquatic warrior is a respectful acknowledgement of Native American culture and its centuries-old dynasty. He also deserves an Oscar.

Be prepared to be awed by the majesty, dangerous liaisons, warfare and inner growth. You’ll walk out of the theater shrouded in an overwhelming emotion that won’t subside. A feeling deeper than 99% of the superhero movies you’ll ever see. A eulogy. A spectacle. A marvel. A state of grace. Wow!