The Batman is back 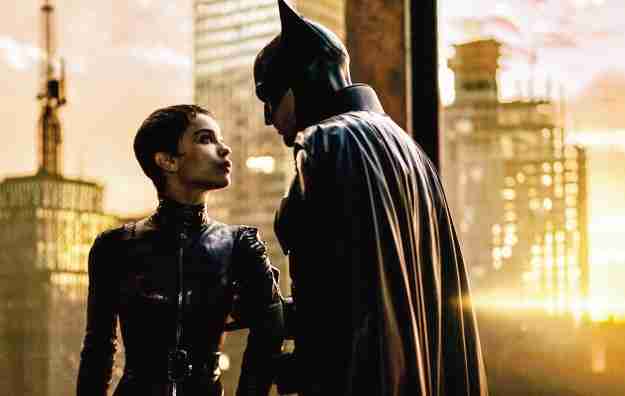 Crime is rampant in Gotham City. Murders. Manslaughter. Blood soaks the streets. Citizens live in terror and the police are stumped. On desperate nights a Batman signal lights up the sky and the caped man jumps into action, but even he can’t stem the tide: “It’s a big city. I can’t be everywhere.”

“The Dark Night” is the pinnacle of superhero movies. That Batman saga set a very high standard for style, content, acting and production values. It drew you into its dark world with strong visuals and plenty of balletic action that pulled you into Batman’s orb, from spectacular fight scenes to gliding magically in air.

Arguably, this new chapter is the only other Batman close to that caliber, a stature set by actors Christian Bale and Heath Ledger, director/writer Christopher Nolan and an incomparable cast and crew.

In this incarnation, “The Batman,” a string of high-profile and sadistic slayings confounds the police. Lt. James Gordon ( Jeffrey Wright, “Angels in America”) works tirelessly with his ally Batman (Robert Pattinson) to solve the homicides. As the killings ensnare mayoral candidates and city officials, pressure grows to find the serial killer (Paul Dano, “12 Years a Slave”) who leaves behind cryptic riddles. A trail of clues leads to an underworld club and key figures: Selina Kyle (Zoë Kravitz) a cocktail waitress, Oswald “Oz” Cobblepot (Colin Farrell) the nightclub owner and Carmine Falcone (John Turturro) a crimelord. All know more than they’ll admit. A clandestine world of payoffs, informants and corruption is revealed.

The primary characters are courtesy of DC Comics. Director/writer Matt Reeves (“Planet of the Apes”) and screenwriter Peter Craig (“The Town”) add in additional people who are vital to the central crime plotline. They are well developed, three-dimensional and indelible. All spew tone-setting dialogue. The kind that resonates from scene to scene. E.g., as the enigmatic Batman assesses how others perceive him, he defines his own persona: “They think I’m hiding in the shadows. But I am the shadow.” Add in a very timely premise about out-of-control big city crimewaves and viewers will be hooked for the duration.

Reeves’s directorial style emphasizes pageantry over motion. A series of stunning set pieces are peppered with movement, though genre fans may prefer movement seasoned with drama. Which is why, as this whodunit nears the three-hour mark, younger audiences may get a bit rambunctious.

But if they wait, and they’ll have to, Reeves rewards them with bursts of kinetic energy (car chases, fistfights, aerial displays). It’s almost enough to make up for any lapses in pacing (editors William Hoy, “Dawn of the Planet of the Apes,” and Tyler Nelson, “Mindhunter”).

The filmmaker’s other blemishes include an inability to bring the footage to an evocative ending. The climax swells perfectly, the final moments do not. Also, when Batman glides through the air, he fails to compellingly show Batman’s viewpoint. A perspective that would make audiences gravitate even further into the masked vigilante’s aura and make an IMAX viewing mandatory.

And, if the visuals won’t astound viewers, the eerie audio track will. Michael Giacchino’s musical score intensifies the gloomy, soul searching and fearful atmosphere. Creepy sounds (ADR editor Bobbi Banks, “When They See Us”) fray nerves. This is the kind of tech team directors/producers gleefully take into battle. The kind that wins Oscars.

Actor Robert Pattison has been prepping for this iconic role for 14 years. First, he built a fan base with the teen heartthrob “Twilight” franchise, which started in 2008. His gritty performance in “Good Time,” mysterious turn in the “The Lost City of Z” and gravitas in the art film “The Lighthouse” have primed him. The dual role of furtive Bruce Wayne and brooding Batman is his destiny. He commands attention.

Supporting cast members work their spells too. A scene in which Batman and Lt. Gordon furiously interrogate Oz features acting so fiery and accomplished it underlines Pattison, Wright and Farrell’s brilliance. That heaviness is nicely balanced by Kravitz’s lighter, coquettish, downtown vibe that she displays as the plucky young lady who becomes a feline crusader. FYI, Bat and Cat have chemistry.

Andy Serkis as Batman’s valet Alfred is stately. Barry Keogan’s interpretation of Ofﬁcer Stanley Merkel exhibits an in-your-face, badass New Yorker attitude that’s so apropos. Colin Farrell hides within the Oz/The Penguin character, shielded by makeup (Kat Ali), a fat suit and prosthetics that make him invisible. Dano, as the ﬁlm’s chief villain, lacks the screen time it takes to build a lasting impression. Ledger as Joker had more scenes, which helped him sear that villain’s image into pop culture history. While Turturro’s sociopathic Carmine Falcone works the screen in a way only DeNiro or Brando could duplicate.

Expect “The Batman” to stun mature audiences. It’s not so easy to judge whether this very adult approach, complex storyline and lack of momentto-moment action scenes will hook teens and twentysomethings enough to make repeated screenings an addiction – a prerequisite for boosting box ofﬁce grosses into the billion-dollar stratosphere. TBD.

Reeves, Pattison and the talented cast and crew have created a crime/action/drama extraordinaire. A close to perfect superhero ﬁlm that nips at the heels of the untouchable “The Dark Night.” (***½)

Next post March Miami-ness and beyond: Fun at 2022 festivals and events