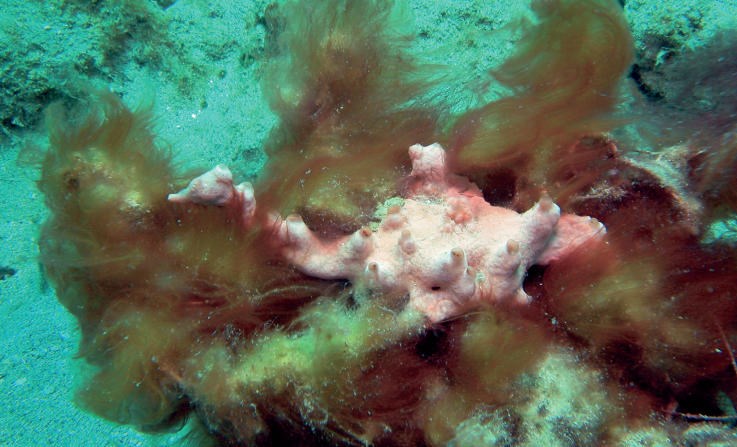 Gainesville, Fla. — From cyanobacteria blooms found off the Florida coast near Fort Lauderdale, University of Florida researchers have discovered a novel marine natural product that binds to a new site of tubulin, an important target for cancer drugs.

Tubulin is a group of proteins found in the cytoplasm of cells, outside the nucleus. They serve as building blocks of microtubules, which are involved in cellular structure and aid in cell division.

Marine natural products targeting tubulin have provided the basis for several anti-cancer drugs approved by the Food and Drug Administration, including paclitaxel and vincristine.

For decades, cancer researchers have explored new ways to modify the protein’s function and dynamics by developing compounds that target one of tubulin’s six binding sites. The UF researchers discovered a new chemical compound that targets a seventh binding site.

“Tubulin is among the most successfully targeted proteins related to cancer chemotherapy, and there is tremendous interest in discovering new molecules that bind to tubulin,” said Hendrik Luesch, Ph.D., a professor and chair of medicinal chemistry and the Debbie and Sylvia DeSantis Chair in Natural Products Drug Discovery and Development in the UF College of Pharmacy and a member of UF Health Cancer Center.

Identifying and fully characterizing this new tubulin-targeting compound and binding site took years of work. The compound gatorbulin-1 pays tribute in name to the UF researchers and global partners who led the way to its discovery and characterization.

Luesch, who is also director of the Center for Natural Products, Drug Discovery and Development, said the compound has unique structural features and drug-like character, including low molecular weight, that separate gatorbulin-1 from other molecules targeting tubulin.

In a study published in the journal Proceedings of the National Academy of Sciences, Luesch and his research team report on gatorbulin-1’s chemical and biological development, including the isolation, structure determination and chemical synthesis of the new natural product.

“We present a complete story that could serve as a textbook example for the characterization of a natural product and exploration of its pharmacological potential addressing all major challenges related to natural products,” he said. “This includes the discovery of a new chemical scaffold, developing a scalable synthetic route for production, establishing the mechanism, identifying the target and pinpointing the binding site.”

Gatorbulin-1’s origins in the Atlantic Ocean add to a growing list of compounds Luesch’s team has discovered from marine natural products. The biodiversity present in the world’s oceans offers a wealth of opportunity for exploration of new drug therapies.

“There are still relatively few marine drugs on the market because the ocean has not been explored to its full potential, but the tide is turning and as a research community we hope to trigger a new wave of drugs,” Luesch said. “Natural products have been the best source of drug leads and oceans harbor the greatest biodiversity and therefore therapeutic potential on this planet. Our discovery of gatorbulin-1 exemplifies that marine cyanobacterial natural products can inspire the discovery of new biology, chemical tools or drug leads.”

Luesch previously discovered the tubulin agent dolastatin 10 from another marine cyanobacteria, which served as the basis for the development of three FDA-approved antibody-drug conjugates targeting a different tubulin binding site.

Proceedings of the National Academy of Sciences is the official peerreviewed journal of the National Academy of Sciences. Luesch’s study, “Gatorbulin-1, a distinct cyclodepsipeptide chemotype, targets a seventh tubulin pharmacological site,” was published Feb. 22, and features contributing authors from Spain, Switzerland and Singapore, as well as The University of Texas Health Science Center at San Antonio and the Smithsonian Marine Station.