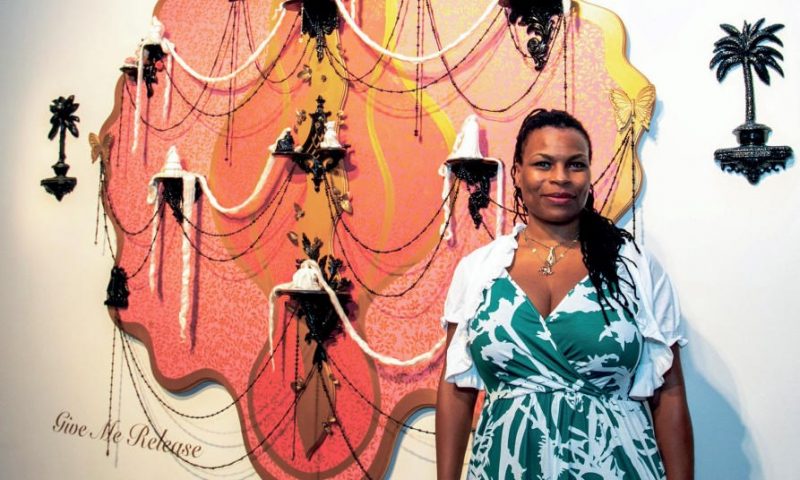 Like the town crier in a fractured fairy tale, “Be My Herald of What’s to Come” rings in Vickie Pierre’s premiere solo museum show at the Boca Raton Museum of Art.

Grounded in the Arts and Crafts movement, her installations have a storybook feel. A fractured fairy tale is, after all, a new twist on an old story, reimagined and restructured for a contemporary sensibility. Just as fractured fairytales can be more subversive than the traditional fables, the playfulness and whimsical flourishes of Pierre’s assemblages are underscored by her pull towards the beautifully grotesque.

In the new exhibition, her works cast a feminine deity spell within the museum gallery. In the installation she created in 2020, titled “Black Flowers Blossom (Hanging Tree),” the artist honors the souls of people lost to racial injustice, including George Floyd, Breonna Taylor, Ahmaud Arbery and the many others.

The exhibition was curated by Kelli Bodle, assistant curator of the museum, and is on view until Sept. 5. Pierre has also been commissioned to create two murals for the museum’s entrance courtyard, as part of the new Sculpture Garden.

“These works proclaim that while we can acknowledge the dark, painful parts of our past, at the same time we can also express hope and light for the future,” said Miami-based Pierre. Her artworks cling to the romanticized, ornate Europeanbased home décor of her childhood home in Brooklyn. The interior design hearkened back to France as the mother country of Haiti, but one that never really was maternal.

“It’s not my history, and isn’t even really my parents’ history,” said Pierre. “All of those decorative elements I remember growing up with, the European flourishes, rococo, and Victorian, were not even part of their lives when they were in Haiti. That’s the push and pull of it. It’s a fantasy, but it’s a beautiful lie,” she added. “Visually, it’s the best eye candy ever.”

She uses vintage Avon perfume bottles shaped like idealized women in period skirts (but removes the tops of the bottles that are shaped like women’s heads and torsos); flaxen hair from dolls; galleon ships to represent the slave trade; bracelets, cuffs and jewelry – all interconnected by long strands of glittering Goddess beads.

The color backdrops are reminiscent of French toile fabrics. Batons appear, as sails that have lost their wind. “It feels like when you are watching something decay, but know that something better will take its place,” said Pierre.

“I’ve been collecting these Avon perfume bottles for some time, using them as my muses. They’ve been deconstructed because I take their heads and torsos off. It’s a play on the idea of the Princess – who gets to be the Princess?”

Pierre’s creative process is informed and inspired by memory, fantasy, surrealism, popular culture and the decorative and ornamental arts. She is best known for her wall installations that blend elements of her Caribbean heritage with contemporary culture.

“There is always a sense of melancholy and longing in my work, it comes from the otherworldly state I put myself in when I am creating,” adds Pierre.

Her exhibition includes, for the ﬁrst time seen altogether, Pierre’s assemblages and freestanding sculpture that highlight her lyrical brilliance.

“This exhibition of Vickie Pierre’s assemblages is both a memorial for what has passed and a desire for what is to come,” said Irvin Lippman, the executive director of the Museum. “Exploring how people can structure their identity, Pierre pays homage to the French and larger European architectural design that influenced Haitian culture while also subverting it. Her vignettes deal with current issues, revealing deeper truths and fractured identities, but are cloaked in charming tableaus.”

Visit boca-museum.org/visit/virtual-visits to enjoy the museum’s current online content, including video tours and digital gallery guides. Museum hours, admission prices and other information is at bocamuseum.org/visit.