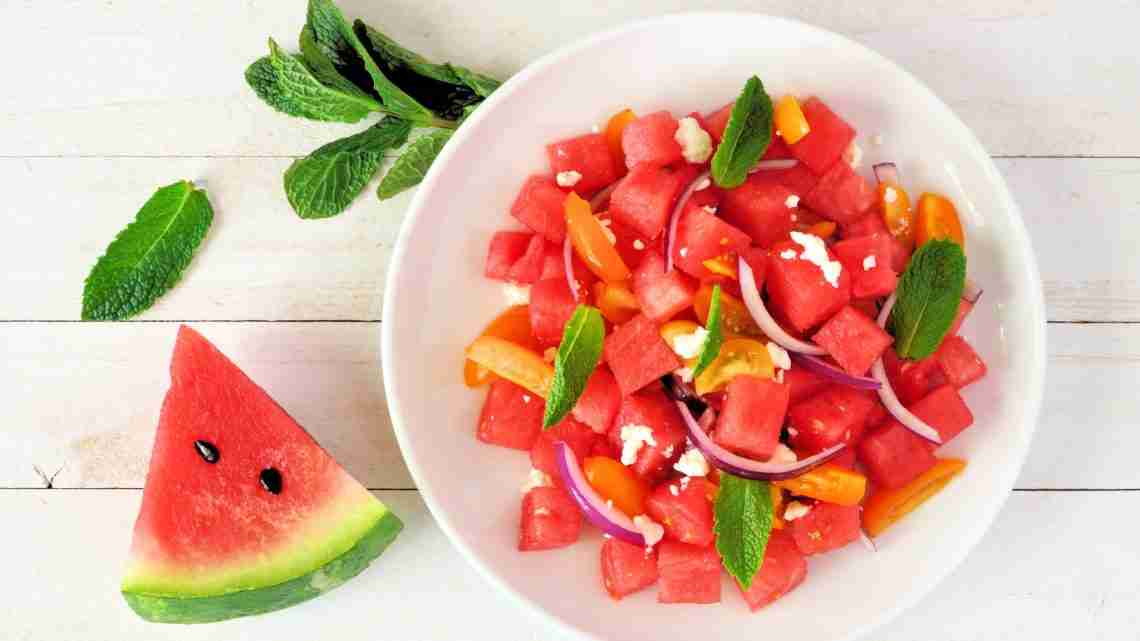 For a fast and easy July warm weather salad, it doesn’t get better than Watermelon Feta.

According to Google Trends, searches for watermelon and feta cheese salads have spiked every July for more than a decade. To taste it is to know why. The distinct and refreshing combo is something I could eat several times a week during watermelon season.

I think it’s safe to call it a new classic.

This salad has so few ingredients, you want each to be the best it can be.

The sweeter the watermelon, the more amazing the salad. You can use large, baby, red or yellow watermelons, whatever is available. Seedless watermelons are easy to ﬁnd these days, and they make the eating experience so much easier.

If you can chill the watermelon before cutting it, your salad will be good to go. If you start with a room-temperature melon, I recommend chilling the salad before serving.

And if you prefer to make balls with a melon baller instead of dicing the melon, go for it.

Be sure to save any extra for snacking or a watermelon smoothie – no watermelon waste allowed!

Get the best feta you can ﬁnd, preferably fresh and not packaged. You can choose from French Feta, Greek feta, Bulgarian feta, Lebanese feta … see what your cheese counter has on offer.

Dice or crumble the feta. If you choose crumbling, don’t crumble it too ﬁnely. The pleasure of this salad is in the bites of different flavors, so you don‘t want them to blend together too much.

Add some mint and red onion: The contrast between the juicy, sweet melon and the crunchy, sharp, peppery onions (not to mention the crumbly, creamy feta) is terriﬁc. Fresh mint ties everything together for some summertime bliss. Mint oxidizes and turns dark quickly after it is cut or torn, so add it just before assembling and serving the salad.

Finally, use a straightforward dressing of olive oil, balsamic or red wine vinegar, and a bit of salt and pepper, if desired. Taste the feta to see how salty it is before you add salt to the dressing.

You can cube or ball the melon up to 2 days ahead of time. Drain off any juice that may have collected in the bottom (and pour it into a glass and drink up! Delicious!).

You can also cube or crumble the feta two days ahead of time, and store all of the components in the fridge. Leave the assembly for right before you serve the salad. Garnish with some additional fresh mint sprigs if desired.

½ teaspoon kosher salt, or to taste

In a small bowl or container, combine the olive oil, balsamic vinegar, salt and pepper, if using.

In a large shallow bowl or serving platter, distribute the salad ingredients evenly and attractively. Spread a layer of half of the watermelon cubes or balls, then sprinkle half of the onions over it, then the feta. Tear half of the mint leaves into large pieces, and sprinkle over the feta. Repeat with another layer of watermelon, onions, feta and mint.

Shake or stir the dressing to recombine, and pour it evenly over the salad. Serve chilled.

This isn’t a pleasant story. It’s a revenge saga that traps you and makes you feel queasy. With venom, writer/director Ellie Foumbi tells a tale about a victim and perpetrator of violent war crimes. Her muse is an African refugee named Marie Cissé (Babetida Sadjo). She’s the head chef at a retirement home in Luchon, a small town in southwest France. On the outside she’s cheery with her co-worker Nadia, and a café waiter named Arnaud (Franck Saurel) who flirts with her. Her demeanor changes drastically the day a charismatic Catholic priest, Father Patrick (Souléymane Sy Savané), comes to the home. Others are impressed by him. Marie is repulsed. This man was a murderous warlord.

Foumbi’s script masterfully encompasses human rights violations, social issues and feminist leanings. Her unusual storyline mimics elements of Stephen King’s “Misery.” It’s enough to keep the narrative fairly engaging, but possibly not in ways ﬁlm fans would favor. Credit Sadjo and Savané for making more out of the one hour, 47 minute thriller than is on the page. The lead actress in particular skillfully wears her emotions on her face, is quite earnest and surprisingly diabolical: “You took everything that was good from me and shredded it. You’re not leaving here alive!”

As a director, Foumbi has assembled an outstanding tech crew. The ﬁlm’s look (cinematographer Tinx Chan; production designer Phillippe Lacomblez) is art house. Its sounds (composer Gavin Brivik) are alluring. And the pacing (editor Roy Clovis) rhythmic. Though the increasingly unbelievable plot builds to an improbable scene with Nadia, Marie and Patrick, the drama does intensify to a fulﬁlling ending. A perfectly acted and crafted modern-day thriller with imperfect plotting.

It’s a record no one wants. Ex-inmate Rickey Jackson was incarcerated for 39 years for a murder he didn’t commit. That’s purportedly the longest prison time anyone who has been wrongfully accused and convicted has ever served. Director/co-writer Matt Waldeck and co-writer and ﬁlm’s subject Jackson retell this injustice using Jackson’s personal experiences and anecdotes. A cast of younger actors re-enact important moments ﬁlling in the cracks. They portray participants in a Cleveland, OH convenience store robbery that resulted in the murder of a White money order collector. Jackson was young when he was arrested, the police department railroad him, a weak star witness accused him, and eyewitness didn’t have the courage to clear his name.

Curiously, the ﬁlmmakers use of dramatizations neither helps nor hinders. The most riveting part of this doc is Jackson himself. His metamorphosis from innocent kid, to young adult convict, to sage older man is a wonder. He’s in an amazing state of grace. Not embittered, but philosophical about his life. The black-and-white footage works as an artistic choice (cinematographer John Turk). Jacques Brautbar’s entrancing musical score keeps you focused. The questionable re-enactments are helped by Dred Geib’s production design, Annin Geib’s art direction and the costumes by Inda Blatch-Geib and Sydney Dematteis-Geib.

At one hour and 44 minutes, many viewers will get restless, not with Jackson but with the pacing and overabundance of facts (editor Mark Andrew Hamer) that aren’t always vital. For those who stick with this longwinded but worthy doc, there are missives about the resilience of life, forgiveness, and suing those who’ve done you wrong that are worthy of examination.

For more information about ABFF go to abff.com. To screen ABFF ﬁlms all