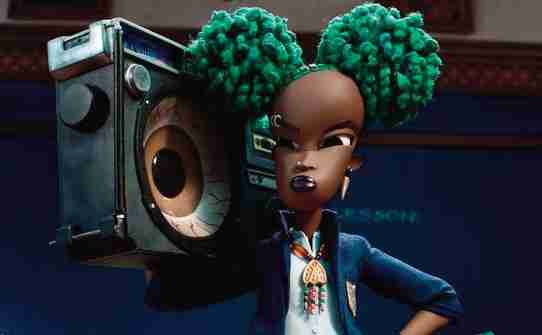 Thirteen-year-old Kat Elliot (Lyric Ross, TV’s “This is Us”) lost her parents (Gabrielle Dennis, Gary Gatewood) in a tragic car accident when she was eight. She still blames herself for their deaths, wants them to come back into her life and has been in an extended state of angst for years. This tween punk rock princess enters her town’s Rust Bank’s Catholic School for Girls with a chip on her shoulder. Her journey should be the ﬁlm’s central focus, but it’s not.

As the movie’s title reveals, the main story is about two demons who are brothers, Wendell (Keegan-Michael Key) and Wild (Jordan Peele). They’re trying to scheme their way out of the Underworld and slither into the Land of the Living. To fulﬁll their dream, they need the aid of a “Hail Maiden,” someone with magical powers who can help demons crossover. Hence their interest in Kat. She’s got that swag.

Connecting the two storylines is enough of a gulp. Adding another competing plotline about a wealthy, greedy and wicked couple, Irmgard (Maxine Peake) and Lane Klaxon (David Harewood), who use intimidation, ﬁre and murder to buy Rust Bank properties for pennies on the dollar is overkill. This class warfare theme involving corporate greed further overshadows the kid’s soul-searching journey, the only plotline worth following.

Writer/director Henry Selick’s jampacked storytelling is aided by cowriter Jordan Peele (“Nope”). They merge ghoulish fantasy with modern Black life and social issues in a way that are very contemporary. Kat’s afropunk rocker vibe is cool as hell and her green afro puffs hairdo is so retro it’s fun. Raising her parents from the dead is her goal and a compelling quest that should retain audiences’ attention for 1h 45m. Instead, her path is so cluttered with distractions and characters it’s hard to keep track of her mission.

There are plenty of gimmicks, including hair cream that brings the dead back to life and a magical toy bear. There’s a bevy of people in her life: Sister Helley (Angela Bassett), a nun at Kat’s school, is a mentor with supernatural abilities: “You’re a Hell Maiden. But it has to be our secret.” Father Bests (James Hong) runs the school, and his fundraising efforts leave him susceptible to trickery. Her fellow student Raúl Cocolotl (Sam Zelaya), an artist, is her wingman. Three clueless classmates, Siobhan (Tamara Smart), Sweetie (Ramona Young) and Sloane (Seema Virdi), are warned to be careful: “Bad things happen to people I’m close to. They die.” What’s on view is either a wealth of storylines, quirky devices and characters or a pileup. Viewers will decide.

Some audiences ﬁnd stop-motion animation unique, other think it’s distracting. Artists manipulate objects whose positions are changed and recorded, and on ﬁlm those images often move around in a jerky fashion. Not smooth and fluid like the 3-D computer-animation in ﬁlms like “DC League of Super-Pets.” It’s a style the director Selick cemented back in 1993 with “The Nightmare Before Christmas” and further perfected as a writer/director on the Oscar-nominated “Coraline.” It’s an acquired taste.

The sketch comedy series “Key & Peele” brought Keegan-Michael and Jordan millions of fans. They were wry, funny and very animated. Part of their schtick involved their very telling facial expressions. It’s a trick that doesn’t transport to the wicked cartoonish characters of Wendell & Wild, where their antics seem muted and their personas can seem annoying. But the vocal performances by Ross, Bassett, Hong and Zelaya, which perfectly convey the emotions and eccentricities of their characters, make up for what W&W lack.

The dull palette of colors (too much gray and purple) isn’t particularly eye-catching, though the cinematography (Peter Sorg) captures it all. The exteriors and interiors (production designers: Paul Harrod, Robin Joseph, Lou Ramano) do the job, but aren’t particularly evocative. Music is the ﬁlm’s strongest asset, including Bruno Coulais’ (“Les Choirstes”) musical score and a fun playlist. Resurrecting the classic 1981 song “Ghost Town” by The Specials is a stroke of otherworldly genius. Blasting “You Sexy Thing (I Believe in Miracles)” by Hot Chocolate adds spirit. And playing “Cult of Personality” by Living Colour is a well-deserved tribute to guitarist Vernon Reid, singer Corey Glover and the rest of that hard rock funk band.

Tween and teen girls and other kids may ﬁnd this ghoulishly cartoonist animation a nice distraction. Mainstream audiences may wish the narrative wasn’t so congested and that the footage was more arresting. Merely speculating who will and will not like this ani/hor/com/fam and its underworld shenanigans is a sign that this ﬁlm’s success may vary.