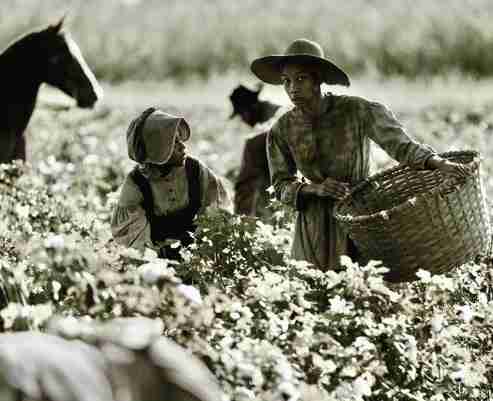 It’s a miscalculation. This ﬁlm is built around a former slave seen in a horriﬁc photo whose back bore the scars of whippings and evil vestiges of slavery. Reimagining his life is a noble endeavor, but this is the wrong execution.

Aside from a brief interview and the short news article “Whipped Slave,” which was published in Harper’s Weekly Magazine in July 1863, little is known about the man in the iconic image. Conjecture and creative license ﬁll in chapters that were never written.

Peter (Will Smith) is a slave in 1863, on a cotton/onion plantation in rural Louisiana. He’s whipped by an overseer, bullied for his deﬁant behavior, separated from his wife and children and sent to work on the railroads. Hearing that President Lincoln has issued the Emancipation Proclamation, Peter and other captives escape and head towards Baton Rouge seeking out Union soldiers who control the city. Chased for ten days by slave hunters and tracked by dogs through a labyrinth of bayous, his goal is to ﬁnd freedom and reunite with his family.

At a Union Army encampment, an interview records Peter’s ordeal, the names of his slave owners, the overseer and some details of his breakaway. During a medical examination, two itinerant photographers capture the protruding disﬁgurations on his back. His portrait is put on postcards, circulated and that vision horriﬁes and galvanizes abolitionists. Peter has a choice, work on a Union farm or join the Union army. He chooses the latter.

The tragedy of the real man’s story and his survival are worthy of a dramatization. The avenue chosen by the ﬁlm’s producers and screenwriter Bill Collage (“Tower Heist”) is what may give discerning audiences pause. Peter’s tale is told in the action/thriller vein. It’s a genre director Antoine Fuqua has honed over his career with thrillers (“Replacement Killers”) and hero-worship action movies (“The Equalizer”). This might have been a good time for the director to change course and make a respectful, distinguished and historical production. After all, if Tyler Perry could curb his tendency to make cheap comedies and create the deeply moving and haunting A “Jazzman’s Blues,” certainly Fuqua could step out of his comfort zone too.

As Peter flees, the camerawork (B&W with hints of sepia by cinematographer Robert Richardson, “Kill Bill: Vol 1”) favors shots of slave hunters on horseback and menacing hounds tracking Peter and the other escapees. These chase scenes feel too cowboy-ish, like Fuqua’s “The Magnificent Seven.” One of the cheesiest sequences comes when Peter wrestles an alligator underwater. He ﬁnally steps out of the quagmire, you think he’s the victor, then the gator attacks one more time. Like a monster in a tacky horror ﬁlm.

Nothing about this take on America’s enslavement of millions of Africans feels new. In 1989, Glory, featuring Denzel Washington’s stirring performance, depicted black troops bravely ﬁghting in the Civil War. In 2013, Steve McQueen’s Oscar-winning 12 Years a Slave brought gravitas and exposure to slaves who dared to flee. In 2016, Nate Parker’s “The Birth of a Nation” shared a sense of oppression and rebellion in the deepest ways. Dignity is a common thread in those ﬁlms. Here, not as much.

Charmaine Bingwa as Dodienne, the mother of Peter’s children, brings a natural essence to her role. Ben Foster’s interpretation of a bounty hunter turns into a boogeyman caricature and his character’s interactions with Peter are sadistic and cartoonish: “You walk the earth because I let you. I’m your god now.” Really? And there’s bigoted dialogue, regarding freed slaves, which sounds way too modern: “First they take our food, then our jobs, then our land.”

Smith is not a consistently strong character actor. Yes, his performance in “King Richard” was charming and his characterization of the Nigeran pathologist in “Concussion” was seamless, accent and all. But here, his stiff, brooding portrayal feels obtrusive, his creole patois doesn’t gel and he wears too much makeup. It makes you wish he had been coached to blend into the scenery. Like the very fluid actor Jeffrey Wright does in every role, and particularly in the Civil War drama “Ride with the Devil.”

Tech credits, from the musical score (Marcelo Zarvos) to production design (Naomi Shohan) and era-accurate costumes (Francine Jamison Tanchuck, “Glory”), range from decent to great. But, in an attempt to mold itself into the shape of movies like “The Great Escape” or “The Deﬁant Ones,” the makers of this ﬁlm have resigned the horrors of slavery to a gimmick. That’s a bad choice. A miscalculation.