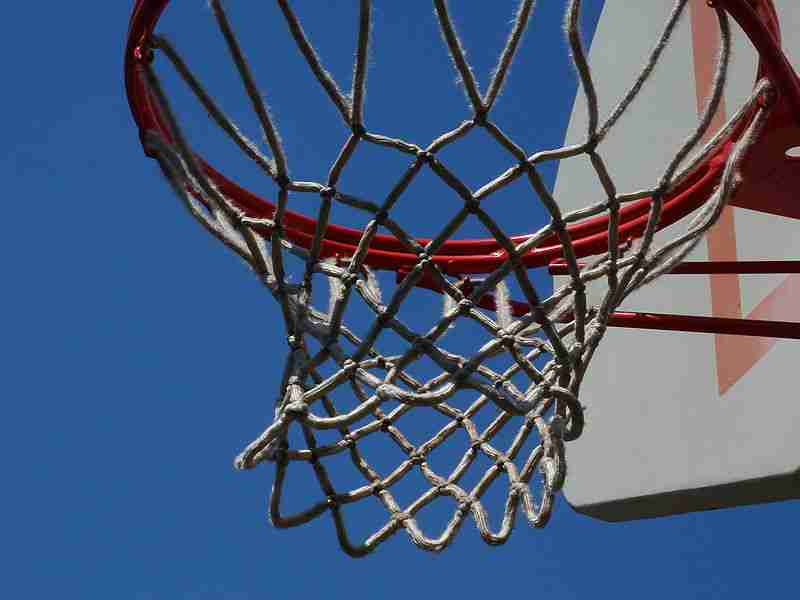 By JOHNNY DIAZ
The Sun-Sentinel

The 17-year-old catches it, focuses on the hoop ahead and shoots a three-point basket just before dusk at Holiday Park in Fort Lauderdale. They were on day five of their challenge to shoot three-pointers.

Van Horn, 32, and Mitchell have been meeting at the park this January, each time extending the number of three-pointers they have to hit before they can go home.

They don’t always connect. The ball bounces off the rim with a clang. Some shots are too high or too wide. The thump thump thump of basketballs from other players thunder in the background as they watch Van Horn and Mitchell.

They hope the challenge will make them more fit, which is a resolution for 2017. They are also doing this as part of the Big Brothers Big Sisters of Broward County Great Big Challenge. Volunteers with Big Brothers Big Sisters of America pick their sport or exercise – yoga, running, walking, weight training. They then create web pages, set up fund-raising goals and have their friends and families donate.

Van Horn and Mitchell’s challenge is already a slam dank. Two weeks into it, they surpassed their goal of $1,000.

In the beginning, the pair accomplished their day’s worth of shots in just a few minutes, finishing with a celebratory chest-bump. By now it’s been taking up to an hour to complete their goal, shooting under the bright lights of the park at night.

“My lifelong record is 31 in a row but that’s when I played every day when I was really good,” said Van Horn, who played at Robert Morris University in Pittsburgh. “I am hoping Dez carries us through this.”

“That’s a good point. It’s a team effort so if I make 10 and you make 10, I guess I’ll make 10 more. We might be here all day towards the end of the month,” joked Van Horn, who was named Big Brother of the Year last year in Broward and again this year.

The two have known each other for about five years. Mitchell was 12. Van Horn, a Fort Lauderdale bankruptcy attorney, was looking to give back to the community after a coworker suggested he volunteer with the nonprofit organization. He believes they were paired up because they both lost their fathers at an early age.

“Dez was a little punk kid when I met him,” Van Horn recalled with a smile. “Now he’s my size. I’m 6-foot-2 and he’s 5-feet-10-inches tall and he’s growing every day. We synced immediately.”

Although Mitchell was more into football at first, he’s improved his basketball game with Van Horn’s help.

“When we first met, he wasn’t really a shooter and I said, `Well, this isn’t going to work out if you don’t shoot threes because that’s all I do,’ “ said Van Horn.

“Basketball was never my favorite sport. I am getting better at a sport that I don’t play really well,” said Mitchell, who lives with his mother in Fort Lauderdale. He has two older sisters, ages 26, and 22, and two younger brothers, ages 11 and 18 months.

Over the years, Van Horn and Mitchell have played video games at arcades, raced go-karts, hit baseballs and seen all the latest superhero movies. Getting behind the wheel is the next challenge. “I am still teaching him,” Van Horn said.

Two years ago, Mitchell began working at Van Horn’s law firm after school. Mitchell delivers files and makes copies and documents for clients and staffers. A junior at Blanche Ely High School in Pompano Beach, he also has a quiet place there to do homework. He wants to study criminal justice, or law, after he graduates.

“Most recently, Dez got all As and Bs on his report card, which is most important. As a reward, he is going to New York. I said if you get all As and Bs, where do you want to go? He’s never been on a flight before so he wants to see the Big Apple and he wants to see snow, which is crazy, so we will probably go in February,” said Van Horn.

When they learned about the fitness challenge, basketball naturally came into play.

“This time of year, everybody is focused on getting healthy, everybody is focusing on losing weight, including me. I am trying to eat healthy,” said Van Horn. “It’s about building healthy relationships. Desmond and I could sit at home and play video games (but) we’d rather be out here really competing.”

“He’s better than me. I tried to fight it,” Mitchell confessed with a smile. Then, swish.

Next post No fries: Florida wants students to whip up healthy dishes