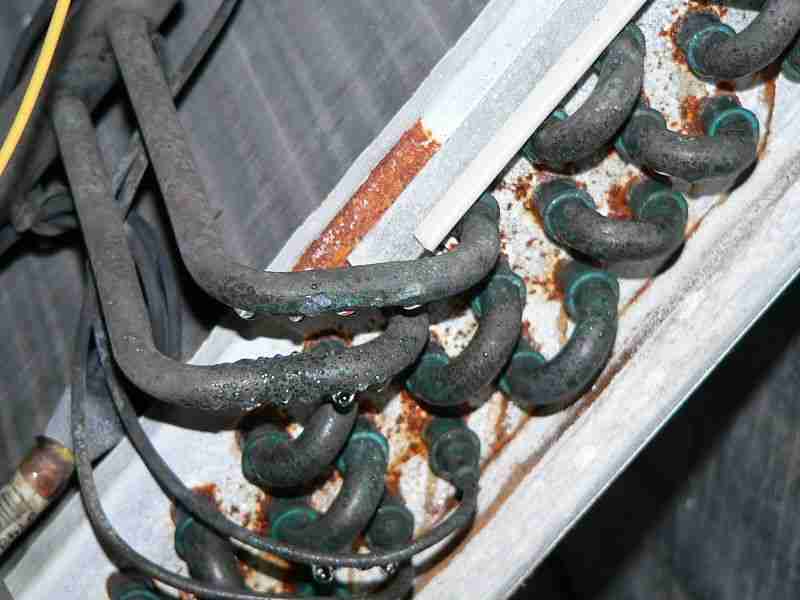 It’s been that way for almost nine years.

In 2008, Hendrix’s family was one of 12 poor black families encouraged by the Tampa Housing Authority to become first-time home buyers in east Tampa. With down payment help from federal and city grants, they took out mortgages for new homes that cost up to $175,000.

But the homes were built with tainted Chinese drywall, the same material that marred an estimated 100,000 U.S. homes built during last decade’s boom and bust. Within months, light fixtures and wall sockets stopped working. Air-conditioning units kept breaking down.

The toll was human, too, with residents complaining of headaches, rashes, nosebleeds and breathing difficulties.

After the problems came to light, the developer and the Housing Authority argued over who was responsible. They still disagree today. Meanwhile, a class-action lawsuit against the Chinese drywall manufacturer has stalled.

With no help in sight, eight of the 12 families eventually walked away from their homes, their credit ratings ruined.

Hendrix, 51, is one of them, working two jobs to afford her $800 monthly payment.

She rides the bus to Tampa General Hospital for an eight-hour shift as a therapy rehab technician. Twice a week, she scrambles across the bridge from Davis Islands to a second job at an assisted living facility where her shift doesn’t end until 11 p.m.

All that hard work and eight years of payments have gotten her to this:

But she won’t give up on the place where her grandchildren learned to walk and where she wants to bring her 90-year-old mother to live out her days.

So Hendrix stays, living without air conditioning, without a working stove, without hope that things will get better.

“Sometimes I cry. I got to work; I got to keep paying this mortgage, paying these bills,” she said. “This is I what I worked hard for. I’m not going to walk away from my house.”

The home in east Tampa’s Belmont Heights neighborhood should have been a second act for Hendrix, one made up of grandchildren and retirement plans after raising four children as a single mother.

Most of her life was spent in Central Park Village, a blighted public housing project within sight of the shiny skyscrapers of downtown Tampa.

She was already pregnant with her first child, Tara, when she graduated from Robinson High School. She juggled motherhood and classes while studying for a criminal justice degree at Hills¡borough Community College. Then her father died of cancer.

She left home but didn’t go far – an apartment in the same housing project, where she had three more children.

So she worked and raised her kids, imagining one day living in a home where noise from adjoining apartments didn’t intrude, a place with its own yard and space to breathe.

Most of her kids were already grown before she got that chance through a home ownership program offered by the Housing Authority. It was aimed at public housing residents who, like her, had a history of steady employment.

She owed more money than she could picture but, finally, the roof over her head was her own. She said it felt special when she turned the key in the door for the first time.

But she was opening the door to a real estate crash and a housing health disaster, all wrapped into a home built by a company that had already gone bankrupt.

In most regards, the Belmont Heights project was a success.

Funded through a $35 million federal Hope VI grant, it replaced College Hill Homes and Ponce de Leon Courts, two aging and dilapidated public housing complexes. Crime in the area fell and the project won awards from the American Association of Architects, among others.

The inclusion of single-family homes amid more than 800 low-rent and Section 8 apartments was meant to give residents a stake in their community. The 12 homes were built on three different streets but close together. They had small front porches and angular columns.

In all, almost $900,000 in tax dollars helped pay for the homes built with toxic walls.

The Housing Authority hired Michaels Development Co. as master developer of the project, leasing the land to the New Jersey company.

Michaels built the apartments but bid out construction of the single-family homes to Banner Homes of Florida, a small family company operating out of an office on Busch Boulevard.

At the time, many suppliers had turned to Chinese manufacturers to keep up with the huge demand created by the housing boom and two busy hurricane seasons, said Will Spates, principal of Indoor Environmental Technologies, a Clearwater company that has inspected hundreds of homes for toxic drywall.

No one was aware then of the sulfur emissions that blackened and corroded copper coils and wiring and played havoc with smoke alarms.

As many as 30,000 Florida homes may have been affected, Spates said.

Banner Homes would likely have been found liable in court for using tainted drywall, as happened to other home builders.

But that hope vanished for Hendrix and her neighbors in bizarre circumstances.

In May 2007, Mead sold a controlling interest in his company to James Harvey, a 64-year-old investor. Harvey installed his girlfriend, Martina Hood, a 30-year-old Russian-born real estate agent, as company president and fired the Meads.

Months later, Banner filed for bankruptcy, long before any of the residents were aware of the toxic drywall. In the years that followed, both Harvey and his girlfriend died, Hood after a leap from her 29th-floor SkyPoint condo in downtown Tampa.

David Mead left the construction field to become a missionary pilot. He did not return calls for comment.

“Banner Homes is rather an unpleasant memory for him the way it ended,” said his father, Dennis Mead.

Most of the eight abandoned homes have been snapped up at cut-rate prices by developers who have rehabbed them and rented them out.

At least three of them are used as Section 8 housing. That means taxpayers paid to build the homes and are now helping to pay the rent.

Tonia Grant was so excited to be moving into her own home in Belmont Heights, she doodled designs on how she would lay out her furniture.

In 2008, with down payment assistance from the government, she took out an $83,000 mortgage on a three-bedroom, two-bathroom home just four doors down from Hendrix.

“I knew I would put my couch here, my TV here. I had it all drawn out,” she said. “That was the happiest packing I ever did in my life.”

She first heard about the Chinese drywall from one of her neighbors a few months after moving in. Then her air conditioning unit broke.

She began to suffer from headaches and would leave the windows open to get fresh air. She had to pay for frequent repairs to the air conditioner because of corrosion of its copper coils.

She lost her job as a data entry specialist for the city of Tampa because she kept getting sick, she said. It was when one of her mirrors turned black that she decided she had to leave her home.

“That’s when I got scared,” she said. “If it’s doing this to the mirror, turning it black inside, what is it doing to me and my kids?”

After five years of paying her mortgage, she let her home go into foreclosure. Her credit rating went from good to terrible.

Now 45, Grant is trying to rebuild her life. She lives in an apartment in Riverview and works at the Amazon warehouse in Ruskin.

“I thought that was my last chance to be a homeowner and it was gone, it was completely gone, and all the work and money I had put into it to make it the way I wanted was thrown out the window,” she said.

Walking away from her home was equally traumatic for Diane Hicks, who works as a cardiac monitor technician at Tampa General.

Inspectors found that 90 percent of her home was built with toxic drywall.

Her sinuses were often irritated and she had shortness of breath. Later, she had an operation to have 3 inches of intestine removed. It was black, she said.

After she moved out in 2010, the city of Tampa wrote to her saying she would have to pay back the $55,000 in down payment assistance since she did not stay there for at least five years.

She was able to persuade them to drop that, but moving out resulted in her filing for bankruptcy and the repossession of her car, she said.

It seems a distant dream.

While the public and private sector worked together on the Belmont Heights project, neither wants to own the Chinese drywall problem.

Emails show that the Housing Authority knew about problems with the drywall in 2011. That year, it wrote a letter to Michaels saying that as master developer it should accept responsibility, a position chief operating officer Leroy Moore maintains to this day.

“We didn’t sell the homes. We didn’t build the homes,” Moore said. “If there’s more we could have done, I’d like someone to look at that and tell us where.”

But Michaels has refused to get involved, arguing that Banner Homes should be liable. Michaels employs 1,800 people and manages 360 rental communities nationwide.

“We are sympathetic to these homeowners,” said Laura Zaner, vice president of marketing. “We believe there is pending litigation against the responsible parties – Banner Homes and the Chinese drywall provider. Michaels has no involvement in this situation other than the initial land development.”

Officials at the city of Tampa, which contributed toward the down-payment grants, heard about the drywall issue but said they were not contacted for help.

Five years after the problem came to light, the Housing Authority this summer decided to assist the four remaining families in applying for an owner-occupier rehab grant that the city administers.

It was the first contact most of the families had with the authority for several years and came only after local black activist Connie Burton repeatedly raised the plight of the families at a Housing Authority board meeting.

The grant is unlikely to be enough. The city has received almost 300 applications for the $1 million pot, and the maximum individual award is $40,000.

The four families will get priority, officials said, but builders estimate replacing drywall throughout a home could cost up to $70,000.

“I’m not going to speculate on whether we’ve done enough,” said Thom Snelling, city director of planning and development. “We’re doing as much as we’re able to.”

The residents’ last hope for full compensation seems to lie in the courts.

They are among 4,000 plaintiffs in a case filed in a Louisiana federal court against Taishan Gypsum Co., the state-owned Chinese drywall manufacturer.

A federal judge has ruled in the plaintiff’s favor and banned the company from working in the United States. But China’s Ministry of Justice has refused to recognize the court’s jurisdiction over Chinese companies.

The legal stalemate could last for years, said Arnold Levin, a lawyer with Levin Fishbein Sedran & Berman and lead counsel for the plaintiffs.

Burton, the activist, put most of the blame on the Housing Authority. It let the residents down by not pursuing compensation from Michaels, she said.

She plans to keep pushing awareness of their plight until someone steps up to help the last four families.

“These people believed in that process, and they were betrayed and led astray,” she said.

Previous post Dolphins TE Cameron out for season because of concussion