Easing the shortage of black doctors 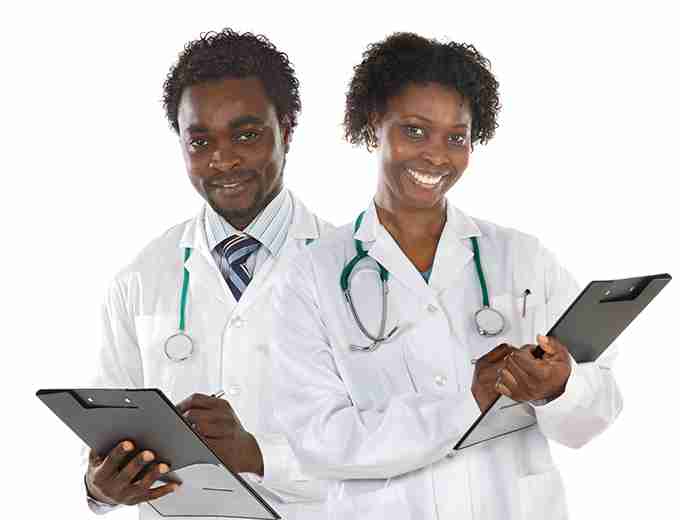 PALM BEACH GARDENS — African Americans are 13 percent of the U.S. population but only four percent of the nation’s doctors. But a group of black doctors in Palm Beach County is hoping to make a dent in the medical under-representation through a novel externship program.

The latest batch, comprising 15 eighth-grade, participants had a chance to visit the operating room at the Good Samaritan Medical Center in West Palm Beach, one of the most prestigious hospitals in South Florida, and actually touch the medical equipment, see the emergency and the operating rooms and radiology unit at work and learn about the birthing process.

“This experience is quite invaluable,” said Dr. Roger L.

Duncan III, an anesthesiologist at Good Samaritan, who is president-elect of the T. Leroy Jefferson Medical Society. “Nowhere else in the county and probably not in the state – not even on the college level – are kids actually in the operating room, touching the equipment and having such access. It’s unprecedented. The young people in this externship have had experience that many young people don’t have until they’re in medical school.”

The externship, now in its third year, has so far graduated 50 students and is part of a mentoring initiative by the society which is named for the first black physician in the county and is sponsored by the Good Samaritan hospital and Wells Fargo bank.

“I have to thank Mark Nosacka, CEO of Good Samaritan, for giving us such access, Duncan said.”

“For most of our students, this was a pivotal event that has altered the trajectory of their career aspirations and scholarly pursuits,” said Dr. Nathan Ringel, magnet program coordinator at Howell L. Watkins Middle. “These future health care professionals will endear and remember the entire experience.”

Yandi Pierre, 14, who wants to become an obstetrician, agrees.

“It was life-changing, very positive, a lot of new experiences,” Yandi said. “We got to observe things, touch things. I truly believe it will make a difference in my career.”

The Lake Park resident was among the 15 students who graduated from the program in May. They will be acknowledged in a ceremony at the School Board of Palm Beach County on July 23.

Duncan, who graduated from the Yale School of Medicine in 1991, created the program with an overall goal of increasing the number of black doctors, although it is not restricted tao black students only.  He said he wanted primarily young people of color to have first-hand exposure to the medical field in hopes of inspiring them to pursue it as a career.

“There’s a great need for black doctors,” Duncan said, citing the statistics. “We have a special understanding of our community – their diets, their idiosyncrasies.”

About 90 percent of the student population of Howell L. Watkins Middle are black and come from low-income families, receiving free or reduced-price lunch at school. Duncan said he feels a need to give back to underserved communities and, while the students in the program are bright, they may not otherwise have such an opportunity.

“We didn’t get here on our own. I’ve been fortunate. I have an obligation to give back to those behind me, to inspire youth to reach their full potential, to inspire them to dream big. I serve as a tangible role model who looks like them,” he said.

Duncan estimates there are about 200 black doctors in Palm Beach county. About 50 of them are

members of the T. Leroy Jefferson Medical Society, according to its president, Dr. Colette Brown-Graham.

“We’re a dedicated group. We’ve been around 14 years and our goal is to help underserved communities. We’re now a part of the National Medical Association,” she said, referring to the largest and oldest national organization representing African-American physicians.

“All of what we do is for the community. All of our services are absolutely free,” said Brown-Graham, an OB/GYN in the village of Wellington in Western Palm Beach County.

The society hosted its second annual Science Career Opportunities Fair at Inlet Grove High School in Riviera Beach this spring to expose students from 26 participating schools from three counties to careers in medicine. Duncan said the fair attracted 32 exhibitors, including Scripps and Max Planck Institute, and about 600 students.

“We provide them exposure, so they can make informed decisions on careers in the healthcare industry,” Duncan said.

Next post Barack Obama’s ‘hope’ has become fight against cynicism