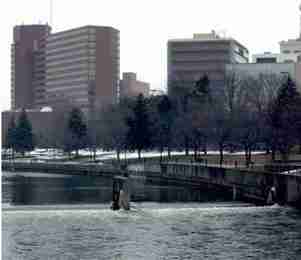 LANSING, Mich. — Flint’s water system no longer has levels of lead exceeding the federal limit, a key finding that Michigan state environmental officials said Tuesday is good news for a city whose 100,000 residents have been grappling with the man-made water crisis.

The 90th percentile of lead concentrations in Flint was 12 parts per billion from July through December – below the “action level” of 15 ppb, according to a letter from the Michigan Department of Environmental Quality to Flint’s mayor.

It was 20 ppb in the prior six-month period.

Flint’s lead levels are again comparable to other similarly sized U.S. cities with older infrastructure, state officials told The Associated Press ahead of an official announcement.

“This is good news and the result of many partners on the local, county, state and federal levels working together to restore the water quality in the City of Flint,” the department’s director, Heidi Grether, said in a statement. “The Flint water system is one of the most monitored systems in the country for lead and copper, and that commitment will remain to ensure residents continue to have access to clean water.”

Residents, whose mistrust in government remains high nearly three years after a fateful switch of the city’s water source in April 2014, are being told to continue using faucet filters or bottled water because an ongoing mass replacement of pipes could spike lead levels in individual houses. The replacement of the lines is expected to take years.

Flint’s public health emergency began when officials failed to properly treat lead lines for corrosion while the city was under state management.

State officials acknowledged the lead problem in October 2015. Lead from old pipes leached into the water supply because corrosion-reducing phosphates were not added due to an incorrect reading of federal regulations.

Elevated levels of lead, a neurotoxin, were detected in children, and 12 people died in a Legionnaires’ disease outbreak that experts suspect was linked to the improperly treated water. An ongoing investigation has led to charges against 13 current or former government officials, including two managers that Gov. Rick Snyder appointed to run the city.

Snyder has apologized for the crisis that has largely been blamed on his administration.

“The remarkable improvement in water quality over the past year is a testament to all levels of government working together and the resilient people of Flint helping us help them through participation in the flushing programs,” he said in a statement. “There is still more work to do in Flint, and I remain committed to helping the residents recover and restore their city.”

While it is important for cities to be below the federal limit, experts say there is no safe level of lead and the crisis has exposed gaps in a monitoring system that can mislead individual homeowners and renters into thinking their tap water is safe when only some homes with lead pipes are sampled. Michigan’s letter to Flint Mayor Karen Weaver was reviewed by the U.S. Environmental Protection Agency before it was sent. Because the city exceeded the federal limit in the first half of 2016, it must continue replacing at least seven percent of its lead service lines by June 30.

While the requirement may be discontinued if the water supply is at or below the limit in the next monitoring period, the state said it would continue supporting Flint’s plan to replace more pipes. The state has allocated $27 million for the project.

Tuesday’s announcement means the state will soon stop providing a credit on customers’ water bills. It has been partially covering their bills dating to April 2014.