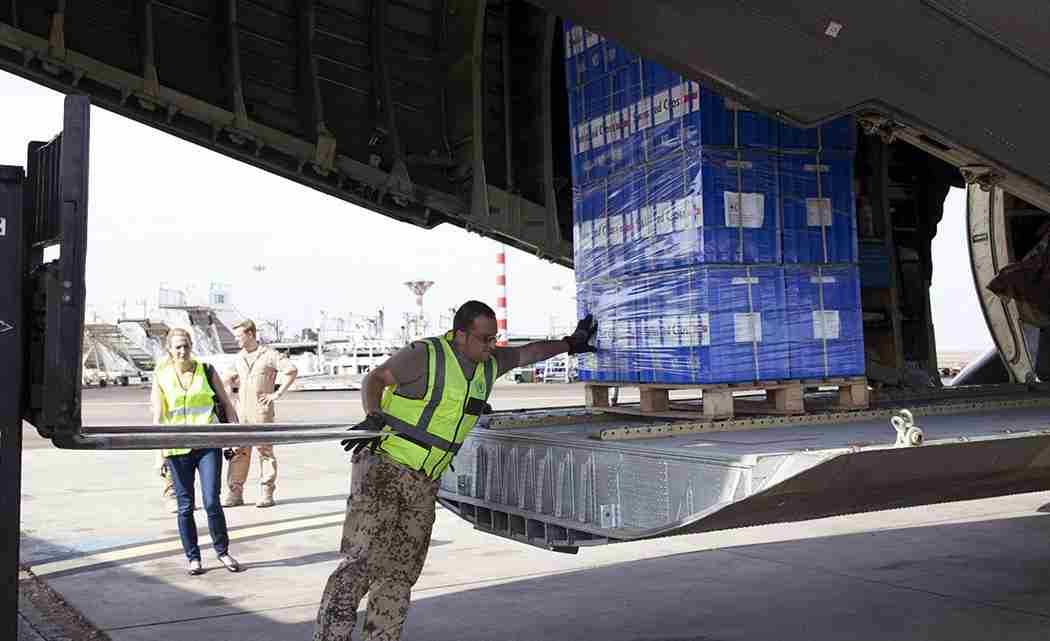 BY RODNEY MUHUMUZA AND SARAH DILORENZO

ACCRA, Ghana (AP) – German Capt. Mattias Reichenbach has loaded protective gear, blankets, mosquito nets, soap and other cargo onto his C-160 military plane and he’s ready to take off on his third mission from the United Nations’ main staging area in Ghana in a war that has claimed thousands of lives in three African countries.

Instead of serving as peacekeepers against insurgents in some bush war, though, the U.N. is battling a different type of deadly foe: Ebola.

Accra, Ghana, which is near the Ebola-hit countries of Liberia, Sierra Leone and Guinea but has not itself been exposed to the disease, has become the main staging area and headquarters for the U.N. Mission for Ebola Emergency Response, or UNMEER. The establishment in September of what the U.N. describes as its first-ever emergency health mission comes as international efforts against Ebola, which has killed nearly 5,000 people across West Africa, are finally being stepped up.

The World Health Organization warns that there could be 10,000 new Ebola cases a week by December if the world doesn’t get more heavily involved. Cuba sent 165 doctors to Sierra Leone, and 91 more doctors and nurses are joining them. China has already sent nearly 200 medical staff to West Africa and provided other humanitarian aid.

The responses by the United States, Britain and France are largely based on historical or colonial ties. France has focused its efforts on Guinea; Britain on Sierra Leone; and the United States is giving much of its aid to Liberia.

– Maj. Gen. Gary J. Volesky, commander of the 101st Airborne Division, assumed command in Liberia on Saturday of the growing contingent of U.S. forces in Liberia. “You need our support demonstrated with action not words, and action is exactly what we are going to provide,” Volesky said. A 25-bed hospital in Monrovia, Liberia’s capital, should be fully operational in the first week of November. American doctors and nurses will care for infected health care workers there. About 600 U.S. service members are now in Liberia – which was established almost 200 years ago for former slaves from America, according to the U.S. Department of Defense. The U.S. also set up Ebola testing labs.

-A British hospital and support vessel carrying 32 vehicles is sailing to Sierra Leone, where more than 300 U.K. military personnel are based. The Royal Navy’s RFA Argus, which left the U.K. on Oct. 17, is expected soon in the capital, Freetown. Britain is also building treatment centers. One center that will hold 92 beds, including some specifically for infected health workers, is almost complete in Kerry Town, outside Freetown. In the national stadium, local and international health workers are being trained every week in how to treat Ebola and safely wear personal protection equipment.

-France is building three treatment centers in its former colony of Guinea, including one clinic in Macenta in the country’s southeast that has seen a resurgence of the disease in recent months. All the centers are expected to soon be operational. France, like the other countries, is also building a clinic dedicated to treating health care workers who become infected with Ebola.

U.N. Secretary-General Ban Ki-moon said last week that the international response has been positive so far, but he stressed that a “massive surge in assistance” is still needed of more protective equipment, mobile laboratories, vehicles, helicopters and trained medical personnel.

“They have asked for urgent help and the international community is answering the call with a totally unprecedented response,” Ban said in a statement. “Many countries have made major financial contributions; others have sent trained and experienced medical personnel to give support on the ground.”

At a warehouse near Accra’s Kotoka International Airport, the World Food Program has tons of supplies stored, from high energy biscuits to blankets. Reichenbach and the rest of the German team are tasked with getting them out as quickly as possible. Flights are made daily to Liberia, Sierra Leone and Guinea by a pair of military transport planes.

UNMEER is clearly preparing itself for a long effort to crush Ebola before the disease gets even more out of control.

“I don’t know when the mission will come to an end … Nobody knows,” Reichenbach said.

Previous post COULD MORE HAVE BEEN DONE FOR THOMAS ERIC DUNCAN?