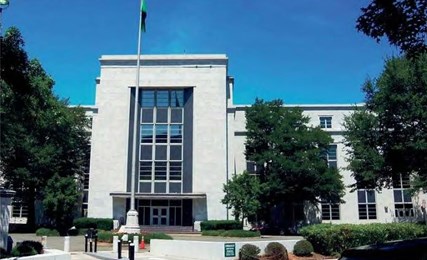 “Saudi Arabian government officials were the accomplices without whom there never could have been a 9/11 attack,” New York attorney James Kreindler said last week during a talk at Dartmouth College.

Among the 11 is the so-called “third man” who is discussed in a highly censored October 2012 FBI Summary Report as having “tasked” a pair of Saudis living in San Diego with aiding two future hijackers – Nawaf al-Hazmi and Khalid al-Mihdhar – when they arrived in the U.S. in January 2000.The four-page report was obtained by Florida Bulldog from the FBI three years ago during ongoing Freedom of Information litigation.

According to Kreindler, the third man was “a high-ranking official in the Saudi embassy” in Washington who “sent an instruction to a consular official in Los Angeles, [Fahad al-] Thumairy, ordering him to provide the help that Hazmi and Mihdhar needed.’’

9/11 accomplices Kreindler would not disclose the third man’s name, or the names of the other 10 alleged Saudi 9/11 accomplices, saying he was forbidden to do so by a “disgusting protective order imposed upon us by the Justice Department with the blessing of the court.”

President Trump ordered the declassification of the third man’s name at a September meeting with 9/11 survivors at the White House on the 18th anniversary of the terrorist attacks on New York and Washington.

The Justice Department promptly issued a statement saying the name was being declassified “in the public interest,” but would be given only to lawyers who represent the thousands of 9/11 victims now suing Saudi Arabia in federal court in New York. The kingdom, which is vigorously defending itself, has long maintained it had no involvement in 9/11.

The day after the Trump meeting, U.S. Attorney General William Barr personally invoked the “state secrets privilege” in court to prevent the release of other censored information contained in the FBI report. “The remaining information that has been redacted from the 2012 Summary Report remains classified and/or privileged and protected from disclosure,” government lawyers said in a court filing.

October 2012 report The FBI report addressed “Updates and Initiatives (as of 5 October 2012).”

Among its topics were then ongoing efforts to charge a suspect (whose name is blanked out) with “providing material support to the 9/11 hijackers;” a June 2012 trip to London by agents and prosecutors “to exploit evidence seized in 2001 in New Scotland Yard’s searches of [suspected Saudi intelligence agent] Omar al Bayoumi’s residences and offices”; information about Mohdar Abdullah, a Yemeni whom Bayoumi tasked to assist hijackers Hazmi and Mihdhar and later “bragged” he’d done so to two fellow inmates at a federal immigration facility.

The outcome of those inquiries is not known, but no arrests were ever made.

The 2012 report’s release to Florida Bulldog was a stunning development in the search for answers. Former Florida Sen. Bob Graham, co-chair of Congress’ Joint Inquiry into 9/11, said the information it disclosed was “contrary to almost everything the FBI has produced so far.” Sean Carter, a Philadelphia attorney who represents numerous commercial victims in the New York case, called it a “powerful and important disclosure.”

“We’ve been repeatedly told by U.S. officials that all questions of Saudi involvement were resolved by the 9/11 Commission and now you have confirmation that there was an active investigation happening years after the 9/11 Commission shut its doors” in August 2004, Carter said.