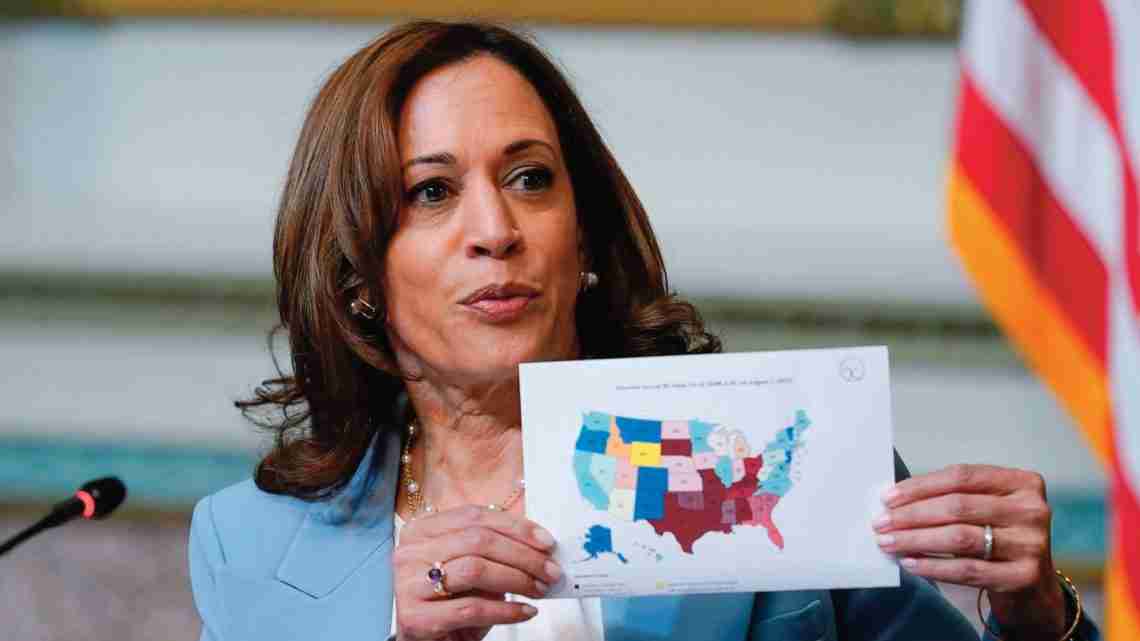 Washington (AP) – The way President Joe Biden sees it, the overturning of Roe vs. Wade was not just about whether a woman has a right to obtain an abortion.

“It’s about freedom,” Biden said at a private fundraiser in New York this past week.

Vice President Kamala Harris takes an even bolder approach when she talks about abortion. “Extremist, so-called leaders trumpet the rhetoric of freedom while they take away freedoms,” she told voters in Illinois this month.

That deliberate echo of “freedom” from Biden, Harris and other top White House ofﬁcials shows how Democrats – eager to keep abortion front of mind heading into the November elections – at the highest ranks are increasingly co-opting traditionally conservative rhetoric in a blunt appeal to a broad swath of the electorate.

White House aides think the message is a particularly potent one, especially when combined with repeated reminders about the GOP’s proposals on abortion, which often do not include exceptions for rape or the mother’s health that are popular with voters.

The freedom message also resonates, ofﬁcials say, as access to contraception and abortion medication is under threat in Republican-controlled states.

Now more than ever, Democrats are leaning into messaging strategy from pro-abortion rights groups, which have long advised candidates and elected ofﬁcials to talk about reproductive rights as if they were part of the tea party the conservative movement that made its mark in 2010 campaigning against government overreach. It’s a playbook that succeeded in August, when opponents of a Kansas initiative that would have allowed for further restrictions on abortion successfully hammered home an anti-government mandate message to voters and on the airwaves.

Organizations supportive of abortion rights say research shows that framing the issue as a matter of freedom is by far the most effective message for voters across all political persuasions. For instance, when participants in focus groups convened by NARAL ProChoice America were shown articles about abortion restrictions, they would often become angry, insisting that the freedom to make personal decisions without political interference was a core American value.

The message, strategists say, can work even on GOP voters. In a July Associated Press-NORC Center for Public Affairs Research poll, 32% of Republicans said after the Supreme Court’s decision in Dobbs v. Jackson Women’s Health Organization in June that they believe Congress should guarantee the right to a legal abortion.

“Fundamentally, particularly now post-Dobbs, in a post-Roe America, getting back to the fundamental freedom guaranteed by the constitutional right … is a really powerful way to talk about this issue,” Mini Timmaraju, president of NARAL Pro-Choice America, said in an interview.

Since the Supreme Court ruled in June to nullify the constitutional right to an abortion, GOP candidates in battleground districts and states have tried to play down the issue while Democrats nationwide have made it a central part of their bid to retain control of Congress. Republicans still say the November elections will be fought on a political terrain focused on the economy and Biden’s standing with the public, although Democrats believe their voters, fueled by anger over abortion, are far more motivated to cast a ballot this fall.

“Democrats are pushing an on-demand, taxpayer-funded abortion agenda that a majority of voters disagree with, all while ignoring the skyrocketing prices, crime surge, and border crisis they created,” said Danielle Alvarez, communications director for the Republican National Committee. “Voters will vote for freedom this November freedom from failed Democrat one-party rule.” Sen. Lindsey Graham, R-S.C., who recently proposed a federal ban on abortion after 15 weeks of pregnancy, has repeatedly argued that his plan is good politics for Republicans and that his party should tell the public that Democrats support few, if any, restrictions on access to the procedure.

“Let’s talk about this in terms of human rights and personal freedom,” he told the AP. “The Democratic Party is on the track of supporting an abortion policy of North Korea and China. They’re not exactly in the column of personal freedom.”

Mallory Carroll, vice president of communications for SBA Pro-Life America, said: “Abortion is the opposite of freedom. It is an egregious human rights violation that harms two people — the baby who is killed and the mother.”

Still, mentions of abortion and the fate of reproductive rights have become a staple of Biden’s political speeches as he steps up his election-year campaigning. A Catholic once viewed by advocates as an imperfect messenger for abortion rights, Biden even referenced his faith this past week as he depicted some Republican-crafted restrictions as extreme.

Abortion was a ﬁxture during Biden’s two fundraisers for the Democratic National Committee in New York, as well as at a rally Friday at the National Education Association headquarters in Washington, where he emphasized that the elections offered voters choices on an array of issues from abortion and guns to democracy. Biden’s political schedule continues Tuesday in Florida, a state that has become more reliably Republican in recent years.

Biden also emphasized the freedom message at a reception in Detroit this month as he talked up Michigan Gov. Gretchen Whitmer, a Democrat who has centered her reelection message on abortion rights.

“Republicans want a national ban on abortion,” Biden said. “Gretchen supports the ballot initiative to put the right to reproductive freedom in your state constitution.” Voters in Michigan this fall will decide whether to enshrine access to abortion in the state’s constitution.

White House press secretary Karine Jean-Pierre repeatedly invokes the word as she decries abortion restrictions across the nation, including Idaho, Texas, Tennessee and Indiana. And at a gathering of Democratic attorneys general in Milwaukee, Harris on Thursday stressed that a woman and those around her should be the ones making a decision about an abortion.

“The government should not be making that decision for her,” Harris said.

Though the party’s candidates from New Hampshire to Florida to Nevada have carried the freedom message in their campaigns this fall, Democrats in some prominent races have taken that anti-government theme to a new level.

An ad released last week from Rep. Chris Pappas, D-N.H., who is in one of the most contested House races, emphatically stated that “here in New Hampshire, we keep the government out of our homes and out of our doctors’ ofﬁces” as it warned about the antiabortion views of his Republican challenger, Karoline Leavitt.

“If Karoline Leavitt gets her way, it won’t be a woman’s choice. It will be the government’s choice,” the ad said in its closing. In response, Leavitt said Democrats were “extremists who believe in taxpayer-funded abortions until the moment of birth” and that state legislatures were responsible for abortion policies, not Washington.

In a campaign stop in Concord, New Hampshire, last week, Sen. Maggie Hassan, D-N.H., warned that the Supreme Court has “taken freedom away from half the population, freedom most women have known their entire lives.” If her opponent, Republican Don Bolduc, were elected, those freedoms would continue to be reversed, she argued.

A spokeswoman for Bolduc’s campaign accused Hassan of wanting to distract from issues such as home heating bills and the economy. But Hassan, in a brief interview with the AP, insisted that she could do both.

“My constituents have to deal with inflation and a threat to their reproductive freedom all at once,” she said. “They expect us to be able to do the same thing.”