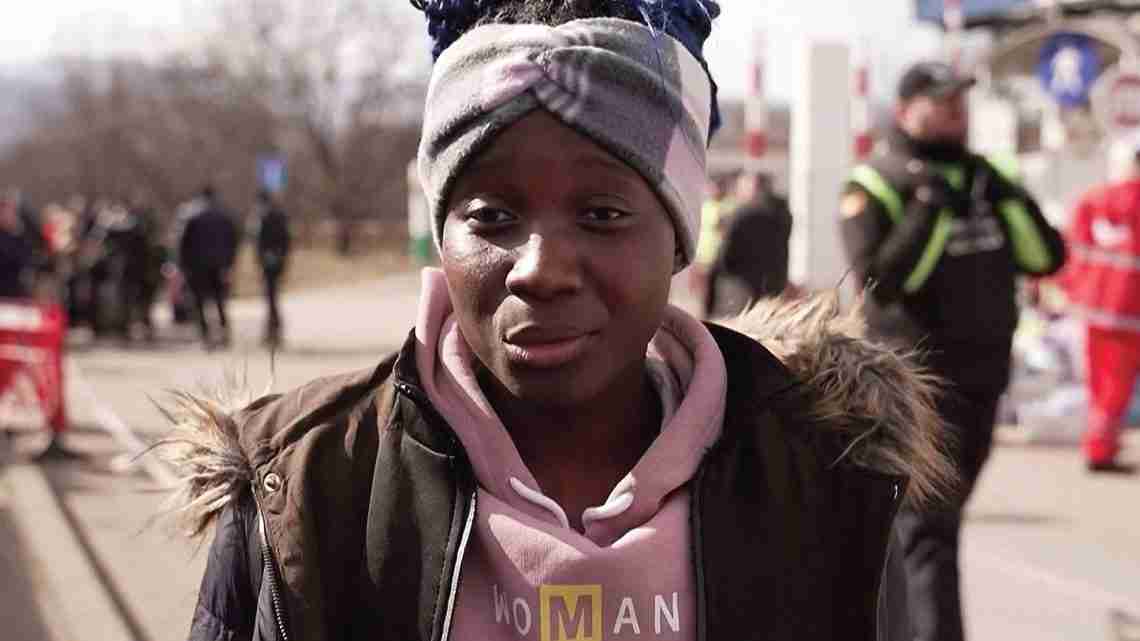 Miami – Ethel Ansaeh Otto, a student from Ghana, and other African exchange students were met with discrimination and hostility when they tried to flee Ukraine during its war with Russia.

African immigrants, some with children, were not allowed to board buses and trains seeking refuge in bordering countries Poland, Hungary and Moldova, like whites and other racial groups living in Ukraine.

Some Africans living in Ukraine told CNN that were kicked off the buses to make room for Ukrainian nationals and left stranded in border towns and allegedly physically abused.

“As long as you are Black, no one likes you,” Otto said “Mostly, they would consider white people ﬁrst. White people ﬁrst, Indian people, Arabic people, before Black people.”

Some Black immigrant students somehow made it to the border but were repeatedly refused entry into Poland, and border patrol troops appear to threaten them with violence, according to USA Today.

A group of Nigerian students said they had no other option but to travel again across Ukraine and attempt to exit the country via the border with Hungary. But they were stopped by Ukrainian border patrol troops and had to stay in Ukraine.

Otto and the Nigerian students living in Ukraine told media outlets about their ordeal of racist discrimination and abuse while trying to flee the wartorn country for safety before hundreds of African immigrants were ﬁnally released last week.

The disturbing images show Black immigrants who were kicked off the buses and trains were left stranded in Ukraine and in the cold for days where temperatures dropped below freezing without life-saving humanitarian assistance.

They were left without water, heat, sanitary systems and phone service for a week in cities like Kyiv, Mariupol, Karkiv, and Zhytomry.

According to NBC news, representatives from several African countries, Nigeria, Kenya, Ghana and Gabon, have condemned the reports of discrimination and abuse, and the African Union said that it was disturbed by the news.

Even before the Russian invasion in Ukraine, Otto said she and other African immigrants faced discrimination and violence on many occasions.

She said Polish nationalists have attacked Africans and made false claims of theft and other crimes.

The war in Ukraine demonstrated how whites are treated better than Africans even when it came to medical emergencies during Russia’s invasion.

The death toll for civilians in Ukraine was not provided but images showed whites were rescued from the rubble while Blacks were left with no assistance to get free.

According to NBC news, the United Nations has acknowledged the discrimination some non-Ukrainians have faced after reports surfaced that African citizens are enduring racism at the border. Filippo Grandi, the U.N. high commissioner for refugees, said that unfair treatment isn’t the result of state policies.

“There should be absolutely no discrimination between Ukrainians and non-Ukrainians, Europeans and nonEuropeans. Everybody is fleeing from the same risks,” Grandi told reporters.

During the massive refugee crisis created by the war, the Ukrainian government has publicly acknowledged that African immigrants seeking to flee the violence have faced racist, disparate treatment compared to white Ukrainians.

“Africans seeking evacuation are our friends and need to have equal opportunities to return to their home countries safely,” the official said, adding that Ukraine’s government “spares no effort to solve the problem.”

To bring global attention to the mistreatment of African exchange students during the crisis, the hashtag #AfricansInUkraine is being used on Twitter because mainstream media weren’t initially covering the abuse of Africans trying to flee Ukraine.

Ukraine and Russia officials are engaging in peace talks to end the conflict but even if that happens, Otto said it wouldn’t make a difference on the mistreatment of African exchange students.

"The mistreatment and violence will continue," she said. "The abuse will not go away."

African students and other Blacks in Eastern Europe and Ukraine facing discrimination and violence go back to over almost 60 years ago including during the Soviet era, according to the Washington Post.

One example happened in 1964, a Ukrainian accosted a Ghanaian student who was smoking a cigarette before a brawl that resulted in the Soviets suffering several casualties while Ghanaians sustained considerable physical injury.

Also, in the 1960s, the Soviets often blamed Ghanaians themselves for the attacks they suffered, accusing them of “disturbing the peace.” They even expelled and deported at least a few Ghanaian students in Kharkiv and Kyiv for alleged “bad conduct” and “hooligan behavior.”

The anti-Black racism they encountered deeply troubled the Africans in Ukraine, and Africans often protested their treatment.

In 1975, protests in Lviv and Kyiv focused on racist representations of Africans in the Soviet media. As in the West, Africa was often presented as a backward continent completely untouched by the trappings of modernity.

Some African exchange students in Russia today claimed they face racism as well even with Jean Sagbo becoming the ﬁrst black man in Russia to be elected to government in 2010 as a municipal councilor in the village of Novozavidovo north of Moscow.

Some African exchange students claimed monkey insults were so frequent that they stopped reporting them.

And Russia ofﬁcials made bad monkey jokes about former U.S. Presient Barack Obama when he was in ofﬁce, even using the images on calendars.