Amid Wave of Protests After Rape, Death of Dalit Woman, Police Arrest Journalist, 3 Others 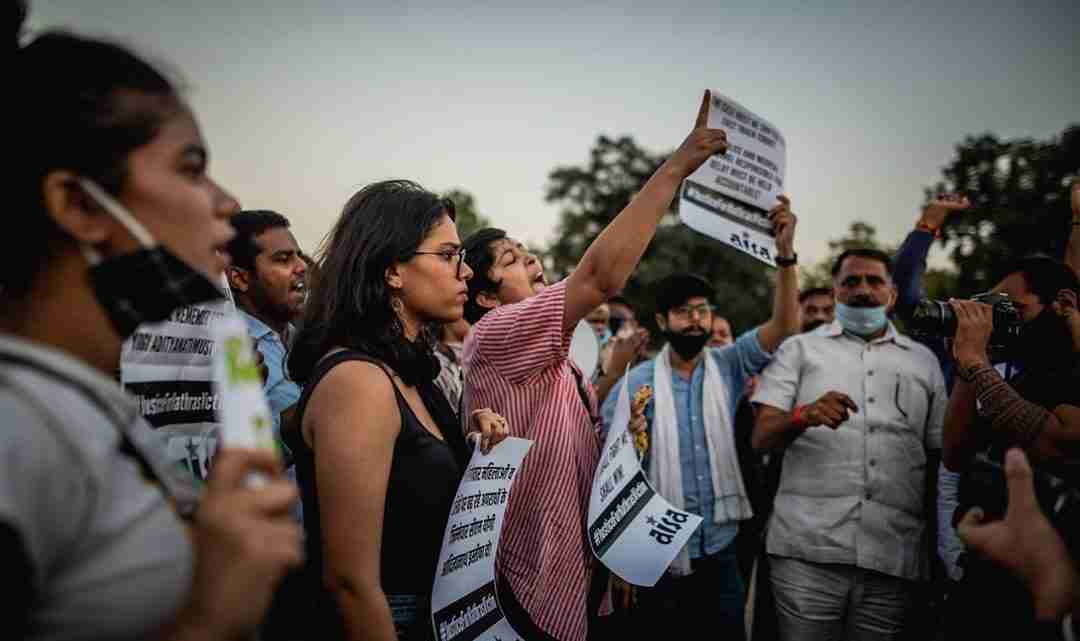 Police in the Indian state of Uttar Pradesh have arrested a journalist and three others, accusing them of an international conspiracy to defame the local government in the aftermath of the recent rape and death of a Dalit woman.

Protests have erupted across India in the wake of the crime, and opposition leaders claim that the government crackdown is a ploy to divert attention from the case.

The 19-year-old woman from the Dalit community, which is at the bottom of India’s oppressive caste system, was raped on Sept. 14 in Hathras and died from her injuries on Sept. 29 in a Delhi hospital. Four upper-caste men in Hathras, about 125 miles southeast of Delhi, are accused of the crime.

Authorities cremated the woman’s body on Sept. 30 without the permission of her family.

The four people arrested on Oct. 5 by Uttar Pradesh police were charged under the country’s harsh anti-terrorism law, the Unlawful Activities Prevention Act. They have also been accused of sedition, according to a copy of the First Information Report, or FIR, registered on Oct. 7 in Mathura district and reviewed by Zenger News.

Siddique Kappan, a journalist who writes for several Malayalam language news websites, and the three others were apprehended as they traveled to Hathras. Gaurav Grover, Mathura superintendent of police, said the four appeared before a magistrate and are in custody.

The FIR states that some elements are protesting with the aim of creating fear and sparking caste riots. It claims foreign funds are being channeled by these elements. The FIR names a popular web platform, carrd.co, and states that such websites are “encouraging anti-national feelings.”

News reports said that allegations by the police refer to a page hosted on carrd.co that had links to petitions on the Hathras incident. The page has since been removed.

The Press Club of India released a statement demanding Kappan’s immediate release and said it fears the conspiracy theory could be a “diversionary tactic to take the focus away from the many suspicious, possibly criminal actions of its police and administration”

Uttar Pradesh police have filed at least 21 cases after protests broke out in different parts of the country.

The police action follows statements by Adityanath, Uttar Pradesh’s chief minister who belongs to the Bharatiya Janata Party (BJP), one of the two ruling parties in Prime Minister Narendra Modi’s government. Adityanath, a saffron-clad Yogi known for his anti-Muslim rhetoric, took the oath in 2017.

“Those who don’t like the development are trying to spark a caste or communal riot,” Adityanath said in a video tweeted from his official account. On Oct. 7, he reiterated how there are such conspiracies every day.

“All those who are engaging in conspiracies will be unmasked,” he said, and strong action will be taken

Adityanath said farmers’ protests against new laws and protests over a new citizenship law that fast-tracks citizenship to non-Muslim migrants from Afghanistan, Pakistan and Bangladesh are part of similar conspiracies.

Udaiveer Singh, a member of the opposition Samajwadi Party, said, “The way the state government has decided to crack down, lodging cases, attacking the opposition, it is a way to divert attention.

“Is the opposition responsible for not lodging the victim’s FIR for seven days, or stopping the media from covering the incident?” Singh said.

Late last week, as the media and opposition leaders headed to the victim’s village, they found their way blocked by a large contingent of police.

An audio clip of a journalist with India Today Television who tried to contact the victim’s family by phone was shared on Twitter by the BJP information technology cell head, Amit Malviya. The media house, one of India’s biggest, alleges that police were either tapping phones of their reporter or that of the family members.

The Editors Guild of India released a strongly worded statement criticizing the Adityanath government for blocking media from reporting on the incident and tapping their phones.

Police officials and a Uttar Pradesh government spokesperson did not respond to phone calls seeking comment.

Kumar, the additional director general of police, stirred another controversy when he claimed that a forensic report on the victim did not indicate rape. He cited a lack of semen as one of the reasons for his observation.

In her statement on Sept. 22, the victim said that she was gang-raped. Indian rape laws have a broader definition of rape than Kumar’s observations.

The four accused in the Hathras case — all from the Thakur community, to which Adityanath also belongs — have been taken into custody. The Uttar Pradesh government suspended five police officers, and Adityanath said he has recommended an investigation by Central Bureau of Investigations.

Azad visited the village of the Hathras victim on Oct. 4, and with the victim’s family, addressed the media. He alleged that the local police were supporting the Thakur community.

During Azad’s visit, local Thakur youth shouted slogans against him.

“For the last three days there have been panchayats (community meetings) in support of the perpetrators of the crime,” Azad said. “Victim’s family fear that the meetings could become a mob and attack them.

“The family is not feeling safe,” he said. “If the government cannot give them security, we will.”

On Oct. 5, Azad and his supporters were charged with violating Section 144 of the Indian Penal Code, among other accusations. Another case filed by the Uttar Pradesh police claimed to have detected an “international plot” to defame Adityanath.

“Whenever there is an atrocity, I don’t stay quiet and I stand with the victims,” Azad said.

“The government stand should have been with the victim,” said A.K. Verma, a political scientist who heads the Centre for the Study of Society and Politics in Kanpur, a city in Uttar Pradesh.

“To not let people go, to send the DM [district magistrate] to threaten them, to burn her body at 2:30 a.m., it’s a brazen cover-up in broad daylight, and they stand exposed in front of the nation,” said Sushmita Dev, chief of All India Mahila Congress, the women’s wing of the opposition Congress party.

Dev was part of the Congress delegation led by top leaders Rahul Gandhi and his sister Priyanka Gandhi Vadra who visited the family on Oct. 3, when the government lifted the block against visitors. They were initially stopped and heckled by police on the Delhi-Uttar Pradesh border.

Dev said government’s response has been a total failure.

“Adityanath does not deserve to be the chief minister,” Dev said.

Another rape case in Uttar Pradesh came to public attention when the victim tried to immolate herself in front of the official residence of Adityanath on April 8, 2018. She had accused BJP leader Kuldip Singh Sengar and others of rapingher on June 4, 2017, in Unnao.

Her father died in police custody and two relatives were killed in a truck accident on June 19, 2019. Sengar was convicted and sentenced to life imprisonment on December. 16, 2019.

The post Amid Wave of Protests After Rape, Death of Dalit Woman, Police Arrest Journalist, 3 Others  appeared first on Zenger News.