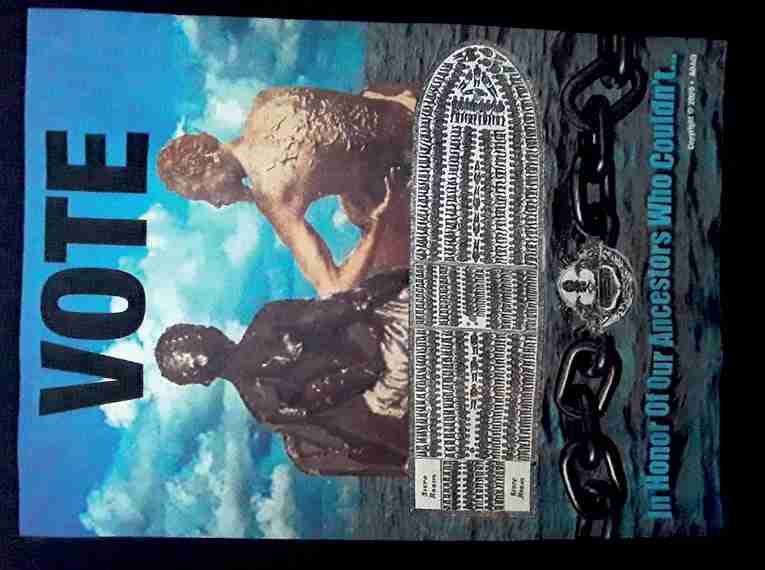 There are those in this nation whom History has “forced, obligated, challenged, and blessed to be truth knowers, truth keepers, and truth tellers” -who from the time their Ancestors stepped out of a slave ship or were herded onto “Reservations,” have clearly seen through all the schemes and scams and shams of America’s historically White Supremacist political system and thus, in many cases, particularly today, have elected, with good reasons, not to get involved in such a corrupted process by bothering to vote.

On the other hand, History also shows that in many more cases, and for even better reasons, those who share even more of that Ancestral wisdom and insight, have long determined that White Supremacy has NO right or claim to deﬁne what government of all the people, by the people, and for the people should be, and these wise minds have never ceased to demand their human right to guide their country’s destiny by voting, even in the face of the most virulent threats.

Such was the case on November 2, 1920, election day 100 years ago (a presidential election when, also, women would be voting for the ﬁrst time) in the town of Ocoee, Florida, near Orlando, with its two thriving Black communities, in the Jim Crow South amidst a rising tide of crowing White Supremacist triumphalism and resurgence of the Ku Klux Klan.

When Mose Norman, a prosperous African American farmer who had been leader of an energetic effort to register Black voters, showed up at the polls to vote that day, he was turned away, but assured by a judge that he was within his rights, he returned, reportedly with a shotgun, only to be driven off again, but this time with a racist mob in pursuit of him, eventually attacking the home of his friend July Perry, another successful landowner who also helped to register voters, whom they would later capture and lynch after he defended his home with gunﬁre, wounding one and killing two of the intruders..

His lynching would begin an all-out assault on the Black community of northern Ocoee, in which 30-50 were estimated to have been killed as all were forced to flee, taking refuge in surrounding woods while their homes, churches, schools and property were burned to the ground, some with people inside.

Shortly afterwards, the residents of the southern community would be driven out as well, forced to sell their property cheaply, and Ocoee would become an all-White town until 1981.

More can be read from a growing number sources about this "single bloodiest day in modern American political history,” which, we are reminded, was both a continuation of and a prelude to countless other violent atrocities to keep African Americans from voting, in addition to routine voter suppression at the polls if they dared to go that far, such as what Mr. Norman experienced.

It seems that no election season goes by without hearing frustrated voices pleading with younger generations to exercise their right to vote, for which so many for so long have paid such a high price throughout this nation’s history, while so many of our youth, not having had the beneﬁt of truly meaningful education, not seeing opportunities for themselves that previous generations might have imagined, and unimpressed by what candidates have to offer, elect to stay home, as they did in 2016, allowing a loser by 3 million actual votes to win just enough electoral votes in a few key states to occupy the White House and set the nation on the course it has taken in the last four years.

And our recall that this fake election was made possible by the 53% of White women who voted for Trump, we are also reminded that the noble and courageous suffragettes like Susan B. Anthony who led the successful ﬁght for women’s voting rights made it clear that she did not intend for those rights to include Negro women.

These may be but small, albeit highly signiﬁcant developments in the much larger drama of this Time of Awakening ready or not, like it or not, for the human species on planet earth, as we confront unprecedented challenges of global warming and sea-level rise, continuing rapid population increase, a deadly COVID-19 pandemic with no end in sight, and, in the social justice arena, the dawn of a Day of Reckoning for all past and present deeds that have brought us to where we are today, as we see in the global response to police killings of African Americans.

In this daunting landscape we might be especially grateful for milestone occasions like the 100th anniversary of the Ocoee massacre as an opportunity not to be missed, for looking both back and forward, to gain understanding and direction, as indeed the City of Ocoee is doing with four days of educational Remembrance from Nov. 1-4, spanning the election and its outcome as part of the discussion.

Perhaps Ocoee is just the timely reminder that Black Votes Matter now more than they ever have in history, but also an equal reminder that our youth, male and female alike, must be heard for their votes to be the vital factor that shapes not only a better nation but also the new world that life on earth demands.